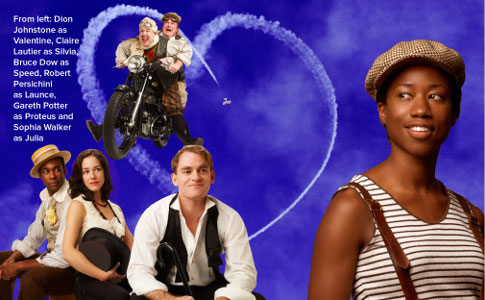 The Two Leading Men of Stratford

The Two Gentlemen of Verona is my favourite production at the Stratford Shakespeare Festival this year. If you know me at all, it wouldn’t have been very difficult to predict that.

First of all, it’s the first show I’ve ever seen in the festival’s relatively new studio theatre (a beautiful and intimate space with a thrust stage and no bad seat in the house). Consequently, it’s a small production: small cast, small audience, relatively low pressure. It isn’t required to fill thousands of seats and therefore is allowed more room to breathe. It’s allowed to be a simple character piece, to tailor to a niche market if it so chooses. The actors don’t have to holler to the back of a huge theatre, they play to the people right around them, making eye contact and really reaching people. A play in the studio theatre is allowed to be intimate, and that’s what Two Gents is.

Which isn’t to say that it’s not accesible or wouldn’t appeal to tons of smart viewers. Director Dean Gabourie gives the play a vaudevillian twist. His characters are performers, an astute choice when dealing with such inherently dramatic creatures. And aside from one bewildering performance number tagged onto the end of the play, the concept only adds to the story; it’s fun and brings a (comparatively) modern sensibility to the action without ever becoming distracting or broad.

I also love a Shakespearean comedy with great women. Sophia Walker’s fiesty Julia is just that. She really gives Proteus the business when they’re together and when he leaves, oh hell hath no fury and all that. She is spunky without being abrasive, flirty without surrendering her power and in posession of just enough resourcefulness to forge her path in search of the departed Proteus in male attire (a trademark move of some of Shakespeare’s most kick-ass comedy women). Walker will also break your heart when she (in disguise) hears Proteus declare his love for Silvia. Her Julia is a truly sympathetic creature, proving once again why she’s one of the company’s most solid female performers year after year. Claire Lautier’s Silvia is less noteworthy, though she does provide ammo for the anti-ingenue rant I’m going to try to convince myself not to publish. At worst, Lautier is predictable and a bit tiresome, certainly not bad or even annoying enough to slow down the lovely production. In a supporting role, however, Trish Lindstrom (The Tempest‘s wonderful Miranda) is laugh out loud funny, proving that the ladies of Two Gents are ultimately awesome.

Now, I’m not usually a big fan of clowns. A well-played Touchstone can be great and an inspired Feste can elicit a laugh or two, but generally I can do without the easily overplayed characters. But Speed (Bruce Dow) and Launce (Robert Persichini) are wonderfully suble creations. Dow, not at his Nicely Nicely best but happily neutralized from his Trinculo self, is amusing, but it’s Persichini’s Launce that is the star of the comedic subplot. Or maybe it’s his dog Crab. Or maybe it’s the two of them together. Either way, Launce and Crab inspire belly laughs all around with deadpan deliveries and perfect timing (especially the dog’s).

But the thing that would most give me away as a predictable Two Gents fan is my love of a good bromance. I love a well-played boy story, a “you’ve had my back as long as I can remember”, “love you like a brother” kinda thing. And to cast two of my favourite actors at the festival as the friends, well, that’s just plain manipulative. Gareth Potter (Proteus) and Dion Johnstone (Valentine) are the inarguable top of the young-leading-man pyramid at Stratford. Potter, the romantic go-to, is a recent Romeo, last season’s Malcolm and this year’s Ferdinand, to name a few. Johnstone, a bit edgier casting-wise, is Caliban this year, Macduff and Oberon in 2009, among other roles. Together, they are so charming and engaging I could watch them for hours. In a nice twist, Potter plays the more complex role (very well, I might add) with Johnstone as the much more straight forward good guy (something that sits simply but very nicely on him). I bought the friendship, but also bought that Proteus might throw it away. They are suave and debonair in their tuxedos, charming while wooing with red roses and love songs and endearingly bro-ish as they tease, fight and reconcile their deep friendship.

The Two Gentlemen of Verona feels like it was made for me. It’s hopelessly romantic, simply staged, clever yet well-developed, deep but still sweet and ultimately brotastic. I loved every minute of it.