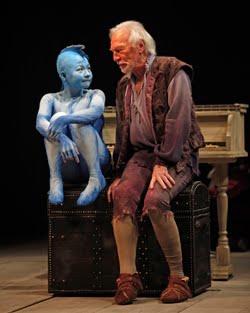 “Tell Me About the Storm”

That quote is actually referencing Lear but seems somehow appropriate to The Stratford Shakespeare Festival’s current production of The Tempest. First of all, it’s from Slings and Arrows, a television show based on the festival. Second, it’s addressed to William Hutt, a Stratford star with insurmountable gravitas (not unlike Christopher Plummer), who’s final role before he died was Prospero. Finally, it sums up exactly what I will attempt to do in this review: tell you about the storm, in all its metaphorical and literal manifestations.

The Tempest is Stratford’s flagship production of the year. It’s on all the posters, the cover of the yearly festival guide and outside the venues themselves (even the ones where it’s not playing). International superstar, Stratford vet and recent Oscar nominee Christopher Plummer has returned to take on the lead role, and by god everyone wants you to know it. His face is everywhere, special signings of his book are tauted at some performances and every review I’ve read of the production merely mentions his co-stars offhand (if at all), in favour of the star. I by no means mean to diminish Plummer’s performance or star power. He is a superb Prospero, taking memorable time out from thunderingly impressive theatrics to play the small moments. In little laughs and simple gestures, Plummer’s Prospero lives as a flesh and blood person and not just a grandiose Shakespearean magician. Clearly, Plummer anchors the piece, but I feel as though it were about time his supporting players got their due praise. So I will forgo the accolades for now, limiting myself to this one paragraph on the star and leaving you with just the knowledge that he is tremendous in the role.

The only other actor given great critical attention for this production is Julyana Soelistyo as the spirit Ariel. General buzz coming out of The Tempest is that the pint-sized actress is a revelation. As I have a tendency to do with things everyone else agrees are awesome, I took a more cynical view on the subject. While I think Soelistyo’s Ariel is a wonderful interpretation (child-like, optimistic, somewhat fragile) I get the feeling that much of what the audience is falling in love with is actually the work of director Des McAnuff; it’s the fact that she’s blue, seemingly omnipresent, slightly glowy and able to fit into tiny spaces from whence she can appear almost magically. That’s pretty cool, but it’s direction and casting, not acting. I fear Soelistyo’s haunting vocalizations and focused physicality are being overlooked as solid performance aspects while her very presence on stage is being sold as a revelation that it surely is not. A good interpretation? Yes; a truly inventive one? No.

But it is easy to be overlooked in a Des McAnuff production. The artistic director’s fine sense of character is almost always missed as his own showy production decisions undermine his better work. Just as Soelistyo’s beautifully subtle performance is overshadowed by her tiny-and-blue-ness (she literally glows in a blacklight used in the opening moments), Dion Johnstone’s wonderfully detailed Caliban is blocked by a distracting spandex suit that covers almost every inch of him, including his expressive face. Both of these aesthetic decisions have some merit (Caliban’s links him to the native creatures that roam the stage at Prospero’s command and Ariel’s is magical and pretty) but both do their actors little good. Johnstone, for example, is one of the greatest talents on stage at the festival in recent years. Making his way through many of the most challenging roles ever written, Johnstone isn’t limited by age, race or even species. His Caliban is a heroically athletic performance as he layers the character with movement and voice completely foreign from his own. He’s funny, terrifying and strangely empathetic and fragile. Between Johnstone’s performance and McAnuff’s character direction (including a small but defining moment at the end of the play that clarifies the character as more human than monster after all), Caliban is a truly fascinating invention. It’s a pity it takes so much determination to see the brilliance hidden underneath the costume.

The other grossly overlooked star turns in The Tempest belong to a celebrated veteran and an unsung ingenue. Geraint Wyn Davies’ Stephano is flat-out hilarious and perfectly executed (drunken stumbling, Scottish accent, red-faced narcissism and all) while Trish Lindstrom’s Miranda brings admirable fire to an overwhelmingly male cast of characters. Lindstrom’s ingenue plays by none of the rules of modesty and grace that other young female characters do. But why should she? From her dreadlocked red hair to her intrepid curiosity, bare-footed daring and romantic forwardness, this Miranda is a product of a single dad on an untamed island, and it shows. The audience laughed perhaps a bit too much at her wide-eyed discovery of the human race and I do wish she were allowed more strength in the log scene, but even such girlish trappings can’t undermine the spunkiness of Lindstrom’s creation.

In contrast, Miranda’s love interest, Ferdinand, is played with princely charm and a touch of sheltered caution by go-to romantic lead Gareth Potter. Meeting Ferdinand, it seems as if he would have to be shaken to his core to take a great risk or abandon his princely ways (not to mention partake in intense manual labour). The fact that he does all those things for love lends the central romance gravitas, something it does not usually have. Miranda changes Ferdinand from a literal prince into a metaphorical one, and Gareth Potter plays that arc gracefully, bringing his unmistakable classical energy to every line. His long wig is undoubtedly silly looking, but we can’t have everything now can we.

The beached nobles Alonso (Peter Hutt), Sebastian (Timothy D. Stickney), Antonio (John Vickery), Gonzalo (James Blendick), Adrian (Robert Persichini) and Francisco (David Collins), are boring. Very boring. I blame this at least in part on the decision to stage the play in Jacobean period (always an unenlightened choice in my opinion). A modern sensibility may have infused the murder plot with a little more verve. Vickery is the best of the lot with refreshing comic timing, but lacks the depth that is possible to attain in the usurping brother of Prospero. Hutt’s seemingly guilt-free Alonso is interestingly helpless, though “interesting” and actually interesting are not always mutually inclusive. It is almost as if McAnuff worked so diligently developing the characters in the other plotlines that when he reached the nobles he called it a day and settled for established actors reading the lines correctly. Not an unforgivable offense I suppose (better them than someone else) but not exactly reassuring either.

A character that was clearly not ignored in the rehearsal process is Bruce Dow’s Trinculo. Overcooked, overplayed and over-costumed, Dow’s Trinculo is a particularly obnoxious version of the standard Dow character. This one’s big gimmick (for there is always a gimmick) is flamboyancy. The caricature is good for a few lazy laughs (lazy in that they are lazily obtained, the sound itself is quite hearty) but also serves up a depressing reminder that Stratford’s demographic (whether it be because of age, geography or whatever) is all too keen to laugh at a man for no reason apart from general flamboyancy.  I suppose the argument can be made that this (and any, really) interpretation is valid but something about it rubbed me the wrong way. It offended me for some reason and I sat there convinced that the same performance 20 years from now wouldn’t get a single laugh.

McAnuff’s signature over-the-top elements are thankfully otherwise absent from much of The Tempest (Ariel and Caliban aesthetics aside). The set appears largely barren and is quite clever (it rotates, rises, sinks and sparkles, but never annoyingly). The storm itself is excellent: using sound, light, performance and a cloth overhang to get the point across. And for the most part, even the magic is executed with nuance. The invisible or flying Ariel, floating Prospero and magical feast are handled cleverly with varying degrees of success in theatrical smoke and mirrors. The trademark theatrics actually make for a couple particularly beautiful sequences when the spirits Ceres (Claire Lautier), Iris (Amanda Lisman) and Juno (Sophia Walker) appear to celebrate the betrothal of Miranda and Ferdinand and when Ariel swims down from the ceiling to begin the play. The only obnoxiously “Des-y” moments come with Ariel’s gaudy and unnecessary wings and Prospero’s mysteriously electric “magical garment”. The later actually prompted a child sitting behind me to ask “was it supposed to do that?” after the strange leafy coat appeared to electrocute Christopher Plummer. (The answer is “yes”, by the way, in case you were wondering).

But ultimately, The Tempest is a very restrained production for Des McAnuff. With a few exceptions, his direction doesn’t interfere with itself and his excellent sense of character is able to shine through. Perhaps it really is on the capable shoulders of Christopher Plummer’s superb Prospero that this production is so successful, but I honestly believe that it’s the bench depth of the Stratford company that makes it really shine. With erstwhile leading ladies (Lisman, Walker) playing single-scene spirits and a 27-season vet (Blendick) as a supporting player, the whole cast manages to stand up to its magnificent star and shine almost if not quite as brightly as he does.