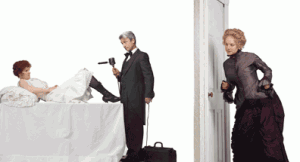 I’ve been to many productions in the Tarragon theatre but until recently I had never been to a Tarragon Theatre production. Turns out it’s a remarkably capable company with strong production values and solid actors.

In the hands of director Richard Rose, Sarah Ruhl’s clever play on modern medicine, domestic power and female sexuality is done excellent justice. David Boechler’s beautiful set and costumes also give an excellent sense of period with large lighting fixtures hanging in the centre of each room to fascinate the 19th century characters. 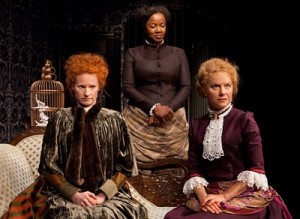 The always-excellent Trish Lindstrom (a 2010 My Theatre Award nominee) steals the show as the delightful Catherine Givings, a character so well conceived that she’s at once realistic and wonderfully memorable. Melody A. Johnson is an excellently troubled Sabrina Daldry, played with just enough neurosis but not enough to render her obnoxious. Marci T. House’s Elizabeth is a lovely and ethereal creature as grounded as she is thoughtful and enigmatic while Jonathan Watton proves charming but antsy as the artist Leo Irving. Elizabeth Saunders’ Annie is appropriately strong but perhaps a tad uninteresting while David Storch’s cold take on Dr. Givings is somewhat (though very interestingly) off-putting.

In the Next Room plays at the Tarragon Theatre in Toronto until October 23rd.