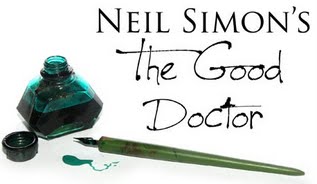 A Fond Farewell to IDS

The Independent Drama Society (IDS) closes its final season in good health with Neil Simon’s The Good Doctor at the Factory Theater. Director Christine Toohey guides the production alongside a surprisingly large and diverse fleet of assistant directors, setting the tone for the collaborative piece. The Good Doctor is a collaboration in every sense- not only are multiple directors working with an ensemble of varied actors, but the piece is a showcase for not one but two famed writers, Neil Simon and Anton Chekhov. Simon weaves an evening of Chekhov’s hilarious and poignant stories of Russian life, which Toohey directs with sensitivity and an eye for detail. While the vignettes are met with varying degrees of success, the cast, crew and design team meet the challenge of each story with vibrant energy and passion worthy of IDS’s final production.

The use of an “alleyway” audience configuration proves very effective. I always appreciate when I can see a fellow audience member’s face, it encourages the audience to laugh out loud, which makes such a difference for the tone of a good comedy. The set is malleable with multiple set dressings and props to change the scene. The living room-like main set is a helpful reminder for the audience of the play’s time and effect.

The show opens with a Writer a la Chekhov, skillfully performed by Bob Mussett, musing on the challenges of writing. Themes of literature, writing and theatre plagued and inspired both Chekhov and Neil Simon and they fit together perfectly to transition the audience into the forthcoming short scenes of common life- representing so much more than the mundane. Mussett has a keen ear for comedy and adapts well to the audience’s humor, never pushing or pulling the audience into reluctant participation but instead musing well as a focal point throughout the evening. I often longed for more of his witty commentary throughout the piece.

Some scenes work very well, tapping into the humor and delight of Chekhov and Neil Simon’s wit and ease with characters. Other scenes suffer with the Plague of Odessa. “The Sneeze” is a fair beginning to the evening’s storytelling. The actors create a fine story (including a hilarious slow motion sequence) and stay grounded in real emotions and motivations. This acting style would prove more than beneficial for the following scenes, but the remaining actors meet the challenge with limited success.

“The Governess” takes a remarkably serious turn, and I believe, proved fatal to the rest of the act. Melissa DeJesus and Kate Daly play exceptionally well off each other, providing one of the only female-female interactions in the play, but the scene suffers from a lack of tongue-in-cheek. The audience never feels the humor in the writing or situation, and the actors never seem to reach their fullest potential for change or reversal, resulting in excellent chemistry but the wrong mood for the scene.

Sarah J. Gazdowicz, however, does an excellent job at understanding Chekhovian humor in her two roles, especially as the Wife in “The Seduction.” While the Wife may not have the most humorous one-liners, Gazdowicz captivates the audience with nuanced acting skill to add her own humor and commentary on the scene’s situations. I’m not sure if Gazdowicz and Zack Eisenstat, playing Peter and her seducer, ever achieve the acme of their chemistry onstage, but they do play exceptionally well apart in the scene.

Perhaps most discouraging is my lack of laughter during “The Surgery,” a hilarious bit of physical comedy combined with sarcastic wit. I thought the scene was funnier on the page as I imagined the wacky antics between this unfortunate pair of characters. Disapointingly, Mark Estano and Chris Anton don’t have the right pacing for the physical comedy, and the scene feels like pulling teeth.

Thankfully, “The Drowned Man” ironically revives the production for Act II, featuring excellent comic timing and physicality from Brian Tuttle and Chris Larson, as Man and Sailor, respectively. This scene has true Chekhovian humor and, with “A Defenseless Creature,” generated the most outrageous laughs of the evening.

While I adored Sierra Kagen in IDS’s last show, Eurydice, I felt like she was a square peg trying to fit into a round hole. She plays the role of Nina with gusto and superior stage presence, but the scene doesn’t produce nearly the laughter that I had previously attributed to her doe-eyed stares and surprising comedic delivery.

Finally, the strong efforts of the dramaturgists, David N. Rogers and Rita Reznikova didn’t go unnoticed; their research and advice provide a solid grounding in Chekhov’s Russia. Each scene containes nuances that come from clear collaboration among the dramaturgists, directors, and actors.

Despite some of my harsher criticisms, with The Good Doctor IDS once again provides an engaging night of humor and wit. The company has shone as an exemplar of fringe theater in Boston and, as both an audience member and a critic, I will miss the opportunity to experience the enchanting collaboration of these dedicated and successful thespians. I suggest everyone enjoy IDS’s final performances on Monday, July 18 at 8pm; Thursday, July 21 at 8pm; Friday, July 22 at 8pm; and Saturday, July 23 at both 3pm and 8pm. Not only will you see the integration of two master playwrights, but, perhaps more importantly, you will witness true teamwork among some of Boston’s finest fringe actors.

Thank you Independent Drama Society and all of the actors, crew and staff, past and present, for pushing the level of success in presenting outstanding independent fringe theater; your hard work and dedication to your craft does not go unnoticed and, on behalf of My Theatre, I wish you all the best of luck in your future endeavors!