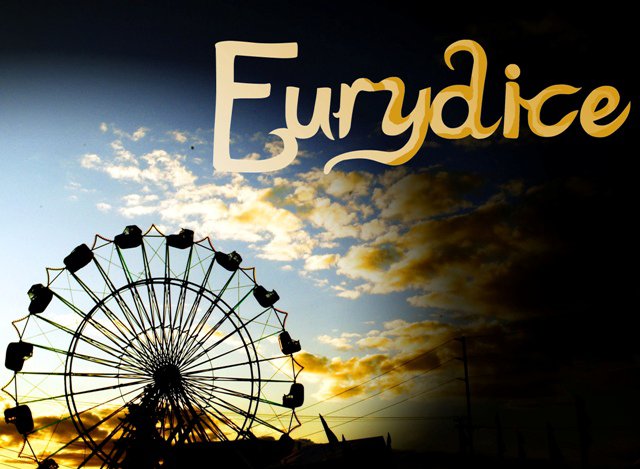 I went to see Eurydice with a friend who has never seen a show by the Independent Drama Society. The show was set to begin at 8pm. It took him until 7:58 to declare “I’m in love with this company”. My fandom for IDS has been growing exponentially with every production they’ve done, but, as my friend so conveniently put into words, they’ve never been quite so lovable as in the moments that precede their current production of Sarah Ruhl’s Eurydice (playing at the Boston Center for the Arts until April 30th)

When the doors of the BCA plaza black box open, audience members are greeted by the enchanting clown version of Sarah Gazdowicz as Little Stone, waving enthusiastically beside the usher taking tickets.

You’re then swept into the intimate theatre where an entire chorus of the most interesting people you’ll ever watch is gallivanting around the room. There are few things more captivating in this world than a properly-executed clown character (not the silly circus type- real theatrical clowning with all its historical and artistic roots).

The Chorus of Stones in IDS’ Eurydice is filled with some of most beautifully executed clowns I’ve seen in years. Their pre-show antics show off the insane acrobatic skills of high-spirited clowns like Zach Eisenstat and Victoria Townsend, then showcases the wonderful detail in more character-based clown creations like Chris Larson’s and Glen Moore’s (Big Stone).

My favourite by far was Sierra Kagen’s Loud Stone, a base, monosyllabic creature every bit as instinctive and naive as her counterparts- and all the more fascinating for her strangeness. Gazdowicz’s bird-like creation was also a favourite, as sweet as she was stilted and angular, and Eisenstat’s endearingly curious oaf stole the pre-show when he climbed on a chair to thoughtfully examine the pretty girl to my left. I don’t recall ever being so entertained before a play even started. By the time the charming director (and IDS artistic director) Lindsay Eagle showed up in her ringmaster hat to give her introductory spiel, my friends and I were wondering if we needed Ruhl’s text at all.

When the play proper begins, it comes remarkably close to living up to the expectations set by the awesome pre-show. Re-setting the technically complex play as a circus of sorts allows the small company to skirt some issues: turning the elevator to the underworld into a sideshow act of human strength and stillness; letting the rain be an effect of lighting and artistic suggestion; creating a pathway through which Orpheus can pass letters to Eurydice via contorted clowns.

Whether the interpretation has truly solid roots in the text or not, the fascinating layers and opportunities created by the circus world elevates the play past where any high-budget elevator could take them. Clowns do relate to life differently than regular people, so in this Eurydice when the Stones attempt to assimilate the newly deceased woman into their way of life and language, she really does have an adjustment to make- a point beautifully illustrated using white face paint in some of the play’s most dramatic scenes.

The lighting design by Matthew Breton is stunning and adds so much to the beautiful and thematic aesthetics of the piece (also boosted by the wonderful costuming from Samara Martin and scenic design by Abigail Neuhoff).

Chris Larson’s sound design is at times beautifully stirring, though it suffers a tad from the awkwardness of Orpheus’ big moment wherein a whole symphony spouts from his tiny vocal chords.

But apart from that one strangely executed moment, the directorial and technical decisions for IDS’s Eurydice are really pretty great.

Cast-wise, the ensemble is remarkably strong. Led by Moore, Gazdowicz and Kagen, the Chorus of Stones is fantastic (and wonderfully omnipresent).

The other four roles are more hit-or miss. Adam Lauver is predictably good as the Lord of the Underworld, tooling around on a tricycle in wonderfully petulant fashion. His darker moments are ideally awkward (especially as the “Nasty Interesting Man”), but somehow not quite pitch perfect- though perhaps its better that way.

Greg Nussen is irresistibly charming as Orpheus- I didn’t doubt for a second that 1) he was beloved the world over, 2) he was awkward about that fact or 3) he’d give everything up for Eurydice. Again, we’re ignoring the bizarro mouth-symphony moment, because, without it, Nussen’s performance can be remembered exclusively for that gorgeous proposal scene, the poetic letters that almost made me cry, or the incredible pain of his accusatory tone asking Eurydice why she called his name and made him turn around, killing her forever.

Cliff Blake is perhaps the weakest cast member (a truth that’s somehow also encouraging since he’s the only one not just starting out on his career as a young performer); he just never really sold me on his fatherly love for Eurydice.

The leading lady herself is thoroughly charming, which is both compliment and criticism. Annie Winneg brings a light quirkiness to the tragic heroine, the effect being an endearing and relatable protagonist. However, her sweetness punishes her a bit at the end when some of her great tragic scenes land a little softly. But she carries the show well, convincing us to care about her when all we really want to do is watch the clowns.

That’s the threat of this interpretation- Will Eurydice’s plight be enough to pull our attention from the enthralling world she’s thrown into? Can Sarah Ruhl’s text trump the entertaining clown show and tell us something new?

In some ways, the beautifully serene text triumphs opposite the topsy turvey backdrop, showing us meaningful moments in how they contrast and block out distractions. At other times the leading cast proves simply less captivating than watching Sierra Kagen bellow, Chris Anton juggle or Zach Eisenstat steal the show as a telephone sound effect.

But I suppose that’s a problem you want to have, isn’t it: so many aspects of your show are so strong that the standard becomes impossibly high. That’s a problem I’d take any day of the week and twice on Sunday. Another testament to just how wonderful the Independent Drama Society has become, I wish I could see Eurydice again before it closes on Saturday- if only to see what the clowns might do.