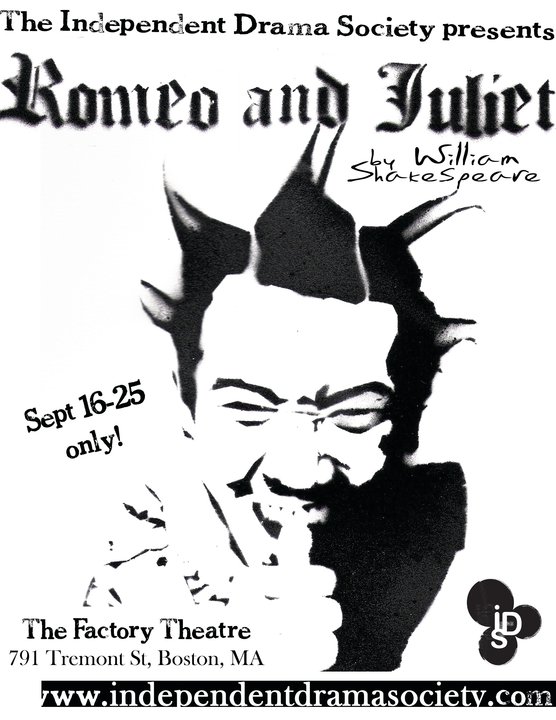 At least once a year, my father tells me he’d rather not go see Romeo & Juliet. When I ask why, he always says it’s because he’s seen it before. Personally, I think the great thing about Shakespeare is that it’s always different. No matter how many times you’ve seen Hamlet, the actors and director will always play it differently. My father disagrees. But even he would admit that he’s never seen Romeo & Juliet like this.

Now until Sept 25th at the Factory Theatre in Boston, The Independent Drama Society is presenting the classic story in a totally fresh way. As played by a punk rock troupe of 8 actors, Romeo & Juliet is the story of 2 essentially smart kids caught up in an essentially stupid problem. The brilliant frame device allows the actors to interact with the audience in a totally new way, take on more than one character and create multiple layers of interpretation.

Director Sarah Gazdowicz spins the text in deliciously innovative ways, redistributing lines and reinterpreting age old characters while never undermining the heart and history of the matter. The staging is inventive and clever as the company uses the space in unexpected ways, and the flow, though sometimes halted by clunky scene changes, is generally pretty good.

Among the dedicated actors, Megan Cooper stands out as a particularly empathetic and savvy Juliet, while William Schuller’s unique Romeo is enigmatically charming. Adam Lauver is the comedic gem of the piece with brilliant timing as both the sniveling Lord Montague and Juliet’s busybody Nurse. Rebbekah Vega Romero reinterprets a playful female Benvolio beautifully, especially in her appropriation of Balthazar’s lines in Act V. Great company energy is added by Alexa Ray Corriea, Chris Larson and Dave Rogers, each of whom offers up at least 2 polarizingly diverse parts, executed effortlessly. But it’s Nic Campos’ excellent Mercutio who serves as the pulsating heartbeat of Gaz’s punk rock vision. His fearless attack on the iconic role, complete with leather jacket and liberty spiked hair, captures the exuberance at the centre of the production and the 400 year old play itself.

IDS’ Romeo & Juliet offers a fresh perspective on a well-told story. It’s an expertly executed production that at once pays tribute to the history of the text, the thrill of rebellion and the power of theatre. The sheer fun of the whole thing can’t be escaped in the intimate Factory Theatre, nor would this company ever want it to be.