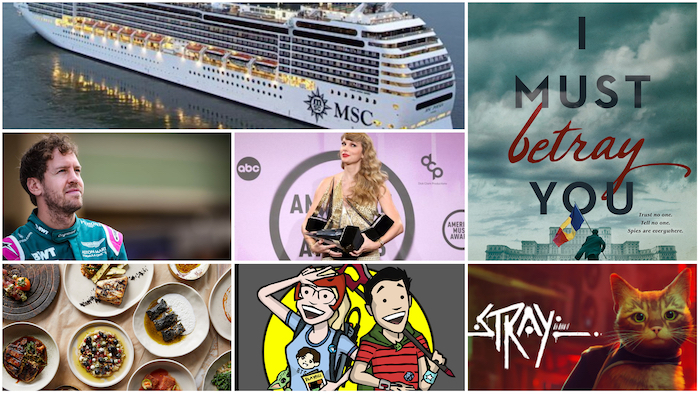 Critics’ Pick Entertainers of the Year

For over a decade, the start of a new year for us meant the announcement of award nominations. Since the 2007 launch of the MyTV Awards through to 2020, the final year of our Critics’ Pick Awards, we’ve celebrated hundreds of deserving artists even as the shape, scale, and branding of our awards season shifted. 2021 was our first year without TV, Theatre, or Film awards since the launch of this website, a decision made in large part because we feel that to present awards fairly we need to honestly be able to say we considered every eligible piece of art, or at least a really sizeable percentage. Since the pandemic, we simply don’t have the staff or resources to be able to attempt that level of comprehensive coverage.

But it felt weird just letting the year end without sharing what we’ll remember most and celebrating the people who made those things. So this year we’re starting a new tradition, our Critics’ Pick Entertainers of the Year. No categories, no competition, just a small nod of appreciation.

Today we’re starting with one choice each for all of our smaller branches Games, Books, Podcasts, Sports, Music, Travel, and Food. Later this week we’ll follow up with expanded picks for our tentpole branches Theatre, TV, and Film.

Thanks to everyone who entertained us in 2022. Here’s to the start of a new one.

Without further ado, here’s our first crop of Entertainers of the Year:

This game captures the essence of being a cat – hopping from ledge to ledge with perfect balance and dashing around as you explore the urban-industrial landscape is supremely satisfying. The robot characters you encounter on your adventures each have their own quirky personalities and reactions to you, and I very much enjoyed unravelling the mystery of the underground city as a feline.

I Must Betray You by Ruta Sepetys

Sepetys has outdone herself with this poignant, beautiful, and haunting fictionalized account of the Romanian revolution. Readers easily sympathize with Cristian’s agony as he sees the toll the Ceaușescu regime has on his country, his trepidation as he struggles to survive, and his glimmer of hope as he experiences the beginnings of first love. An intense but worthwhile read with something for everyone.

This new show from Toronto comedy darlings Stephanie Malek and Kyah Green is exactly the podcast I needed this year. I’m always looking for, more than anything else, a captivating co-host dynamic and it’s an understatement to say that the love between these two is the heart of The Fandom Show. And they bring that heart into their bi-weekly conversations as well, inviting guests who are mostly their friends to come talk about their favourite things. Stephanie and Kyah have seemingly endless stores of enthusiasm and open-minded curiosity to bring to each new topic, whether it be their favourite thing in the world (Buffy, Lord of the Rings), something they know nothing about (Kingdom Hearts), or something they didn’t even know could be a fandom (Mechanical Keyboards?). The Fandom Show is an essential jolt of joy into the weary week and I cannot wait to hear what topics they’ll explore in 2023 (Steph is holding a Wicked playbill in their logo, just saying).

2022 saw the end of four time World Champion Sebastian Vettel’s Formula One career. Having, like so many people, come to the sport (which I maintain shouldn’t really be called a sport but that’s for another day) via the mediocre Netflix docuseries Drive to Survive, I was too late to the party to really appreciate Vettel at the top of his racing game in 2010-2013 with Red Bull. I even missed his runner-up Ferrari days when only the dominance of Lewis Hamilton kept him at bay. I tuned in to see Seb compete with Aston Martin, which is to say he wasn’t particularly competitive at all since 95% of F1 success is simply driving the fastest car. Nevertheless, he was my favourite. With a league-leading overtake record, he was exciting on the track even in a lower tier machine but it was off the track where he made the really noteworthy waves these last few years. Consistently on the right side of history in an organization where progressivism isn’t exactly a common quality, Seb’s unapologetic nature and healthy disrespect for unearned authority saw him outwardly supporting LGBTQ rights in prejudiced countries and creating opportunities for women where it was illegal to do so. He was a refreshing, quirky, and important voice in Formula One and his loss will be keenly felt as he moves into retirement.

Let’s face it, Taylor Swift is my Entertainer of the Year every year. Next year I’ll probably have to pass this category off to a guest contributor with their ear more closely tuned to the whole musical landscape but it’s our first year doing this so I’m going with my girl who released yet another huge record breaking album in 2022 with Midnights (and announced a tour so pre-successful that it nearly burned Ticketmaster to the ground). This comes after the most productive three-year period I’ve ever seen with three studio albums and two expanded re-records plus multiple self-directed videos, including the ten minute All Too Well that’s making the rounds on the film festival circuit. I love her, I have always loved her, and I really love that 2022 was the year you dummies finally realized that she was right about Kanye all along ;)

I travelled a lot this year and there are many articles still upcoming detailing the many facets of said travel, including some of the companies I loved (and didn’t so much love) working with. But the great surprise of my 2022 in travel was MSC Cruises. The European mega-line’s principal business is in shipping but they’re expanding their vacation cruising at a lightening pace, offering truly staggering pricing. The company hasn’t gotten much love from the online review world (I suspect that’s due to the industry’s notable American bent) but my fiancé and I nevertheless took a gamble on a 14-day cross-Europe adventure in Spring 2022 that was priced too low to miss (at one point the lowest tier option was available for less than $700cad per person; we almost felt like we were stealing from them). What we found was decent service, good food, and a varied, surprising, trip-of-a-lifetime itinerary that took us from southern Italy all the way up to Germany. Nightly karaoke (the only ship activity I particularly like) and a free balcony upgrade with daily room service breakfast were the icing on the cake. MSC was truly the dark horse winner of our year of gallivanting.

When I think back on 2022 and every standout meal I had, the one that shines brightest in my memory is without a doubt the middle-eastern/mediterranean feast I enjoyed along the banks of the Regent’s Canal in London while in the UK for a wedding. We ordered half the menu and shared it all family-style, every dish more impactful than the last. Chef Assaf Granit beautifully melds tradition and innovation for his contemporary fusion fare, playing with temperature and texture in really exciting ways. It’s a can’t-miss stop if you’re looking for a fantastic meal in London.