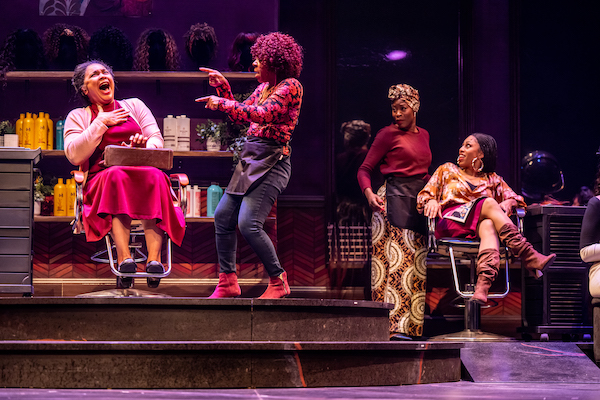 Toronto Theatre Review: da Kink in my Hair is a bittersweet call for community

If you believe a hair salon an unlikely place to find community, you’d be wrong. In fact, in Trey Anthony’s iconic play ‘da Kink in my Hair, directed by Weyni Mengesha, it’s even more than that: it’s a place of healing, a forum where the vulnerable or voiceless step into the spotlight for a moment. They express the joys, fears and frustrations that come with their Blackness, including themes as wide-ranging as colourism and sexual abuse, before returning to the group for guidance.

You might think that including so many subjects in one play would diminish the piece’s clout. However, I believe it shines light on the unending need for solidarity in Afro-Caribbean communities who have too often faced insuperable burdens. Besides, each individual monologue evoked by the hands – on hair of course – of salon owner Novelette (Ordena Stephens-Thompson) receives ample stage time to sink our hearts and souls into. What I appreciate most about Stephens-Thompson is how she commands the stage with grace, acting as a grounding force for the stories to emerge, but without requiring bells and whistles (or clever stage gimmicks).

For instance, successful power woman Sherelle (Miranda Edwards), in a story which seems all too familiar, appears to juggle her multiple personal and professional roles well, until we hear emotional admissions about what has been missing from her life all along. Confessions of the same tone are also vulnerably revealed by the Eglinton West turned Hollywood starlet Sharmaine (Shakura Dickson) and a grieving Nia (Olunike Adeliyi) who both long achingly for their parent’s approval, as so many of us do.

I cannot fail to mention the larger-than-life portrayal of Miss Enid (Satori Shakoor) who offers a hilarious – and carnal – tale involving her neighbour, to balance the heavier components of the narrative.

Perhaps, young Stacey-Anne (d’bi.young anitafrika) has the most heart wrenching and challenging account of the evening. Anitafrika had the audience simultaneously recoiling and enraptured; participating with softly spoken phrases of support and love as if offering gentle hugs from the house. The talented performers’ usage of Patois and self-written dub poetry are a definite highlight. In fact, the latter appears as a mighty call to action. We see something like this early in the show after Patsy (Tamara Brown) tells us how her son Jerome died. Initially, the subsequent ritualistic proclamation of the names of other Black men who have been murdered seems out of place in a hair salon, amongst lively women having casual conversation, but stylistically and thematically makes more sense as the various experiences amass.

What compliments it all are the vibrant and perfectly balanced costumes (Rachel Forbes) and set (Joanna Yu) which captivate us yet never detract from the characters and action, including artwork by Sharon Virtue and Adrian Hayles. I would have, in fact, liked to see more playing spaces utilized other than stage left and centre stage. For instance, the prominent space outside Novelette’s shop window had so much potential to be included in the action (think Little Shop of Horrors where Skid Row becomes Little Jamaica). And the cash desk on stage right is rarely used.

You may wonder how this production, rooted in a specific place and community, has become so timeless and universally loved. Well, it’s because any woman…any person for that matter who has ever felt like they live life on the edges – away from the status quo of the white male gaze – can relate to many of its discussions even today. Its, thus, still very much still relevant.

Anthony describes it as a love letter to Toronto. It really is! I encourage you to go out and see it, though I warn you will be hard-pressed to find a ticket for this Canadian tour-de-force. This TO Live and Soulpepper Theatre co-production plays until December 23rd at the St. Lawrence Centre for the Arts.