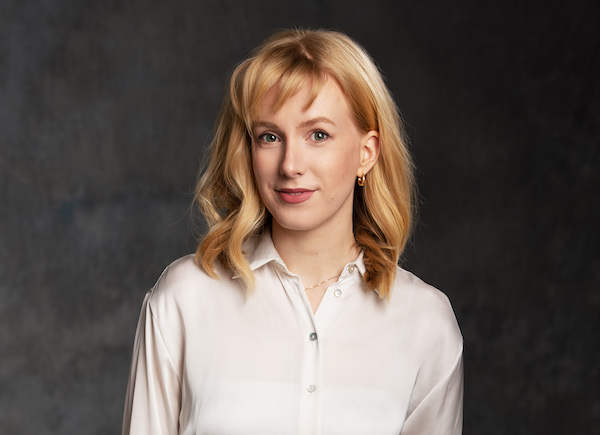 That Understudy Life: Shaw’s Katherine Gauthier in Just to Get Married

Understudying was always one of the hardest jobs in theatre but in 2022 it’s taken on a whole new meaning. Gone are the days when an actor might learn a role only to see the entire run go by without performing it. In the first full season back for many of Canada’s biggest theatre companies but with Covid-19 very much not behind us, understudies are more important than ever right now. This summer, Ontario’s major repertory festivals navigated tricky unprecedented ground as an intricate network of understudies and swings made sure every role was covered in case of a positive test among the company (not to mention all the usual things that can go wrong over the course of a long run). The majority of performances I saw at both the Stratford and Shaw Festivals this year had at least one understudy onstage, sometimes multiple as the last minute call-ups often caused a domino effect.

I think we’re trained to react with disappointment when we see the sign in the lobby that reads “at this performance, the role of…. will be played by…”, especially if it affects an actor we were particularly excited to see. But reviewing theatre in 2022 has completely broken me of that habit. Sure, sometimes understudies are overwhelmed and a little underprepared but, especially in the middle of a long run, sometimes that energy is exactly what the show needs. Sometimes the new actor brings something great to the role that the show was missing before. Sometimes you get to see a future star take centre stage for the first time. And even if those things aren’t true, even if all that really comes of it is that the role gets covered, I still think that’s pretty special. Within the realm of a sprawling repertory company especially, when everyone has already learned multiple roles for their own season tracks, it’s really cool to get to see an actor step up to have their colleague’s back; and I love watching how the rest of the ensemble closes rank to get them through it.

We caught up with some of the notable understudies we saw this year who took on major roles with little notice on some of the country’s biggest stages. In a year full of uncertainty, these are the people who made it possible for the show to go on.

Click Here to read the other interviews in this series.

Even though it so often leads to memorable performances, I will admit to still being a little bit wary of a last minute understudy, especially in the leading role. But when I rolled up to the Shaw Festival’s Royal George Theatre and saw that Katherine Gauthier was in as Georgiana in Just to Get Married, I was pretty thrilled. Though I’m also a big fan of the regularly scheduled performer Kristi Frank, I’d been lamenting the lack of a meaty role for Katherine in this Shaw season and was excited to see her take one on. Little did I know she had only found out she was going on three hours before curtain; even by understudy standards, that’s pretty tight. Georgiana in Just to Get Married is a true leading role and Katherine had to fully drive the play while saying an astounding number of lines and almost never leaving the stage. It was an understudying tour de force and a thrilling feat to witness.

Here’s Katherine in her own words:

Tell us about your experience going on as an understudy in Just to Get Married this season.

My experience going on as an understudy was wild, scary, strange, unnerving and fun. Nothing can quite prepare you for it. Although a couple of extra rehearsals couldn’t hurt…

The weekend before I went on as an understudy for the Tuesday matinee, I had opened The Doctor’s Dilemma on Saturday at 6 p.m. and then Just to Get Married on Sunday at 11:30 a.m. I remember telling my friend: “I’m relieved to be open so I can have room to breathe”. Well, one must never tempt fate like that…

In regular rehearsals, how are understudies incorporated/prepared?

Once the stage manager of any given show deems the show ready for outside eyes, understudies are welcome to attend and watch rehearsals. From the sidelines, understudies learn their lines, blocking and craft their idea of the character.

I was very lucky I understudied a show that I was cast in, so I was able to attend the rehearsals anytime and watch how Severn Thompson, the director, and Kristi Frank, the person who plays Georgiana, were creating the character. Not only was it pleasurable to watch them work, but it was also invaluable to my understanding of the piece.

Because I already had a relationship with Severn Thompson (and if you don’t know Severn, you must – she is a gem), I asked if we could grab a beer to talk about Georgiana. We spent a night going through the show as she imparted her wisdom. This was immensely helpful. The other amazing gift that was offered to me was sitting across the gorgeous human that is Kristi Frank, as she talked through all the technical aspects of the show – “You have to check your hair thing here”, “Make sure he hears this”. I was forever grateful for the time they both volunteered to prepare me to go on (if I had to go on).

Once an understudy is called in, what’s the process on the day?

It depends. For me, I got the call the morning of the show. Because I didn’t have advance notice, I was filled with mixed emotions; sadness and worry for Kristi and a healthy dose of adrenaline, but you mostly have no time to think. I reviewed my script and called my good friend Gabriella Sundar-Singh to a) freak out and b) get some supplies for me. After communicating with my stage manager and assistant stage manager about questions I had, I showed up to the theatre as early as I could (where Gabriella was waiting for me with food and the best pep talk I could dream of – something akin to: “Just say the right lines in the right spots, that’s the job”). Once at the theatre, things moved fast. A flurry of stage management and crew started to tell me a lot of information – including a rapid quick-change rehearsal (just so you are not doing it for the first time with an audience). Next up, trying on the newly styled wig for the first time, as well as jewelry, etc.

Once the wig was on, I went to the audience to say a prayer, trying to imagine who was coming to see the show. I asked for courage to let myself be seen. Before I knew it, it was fight call – which was strange because I usually play Bertha, the character on the receiving end of a few physical altercations, so for the first time, I was the one who got to do (*Spoiler Alert*) the slapping and the hair pulling. My sweet new pal Allison McCaughey understudies Bertha while I do Georgiana. It was a remarkable experience to go through that together. After the fight call, I did a check-in with my scene partner Kristopher Bowman, with whom I portray intimacy and have the bulk of my scenes. As an improv master (and cherished pal), I knew he would have my back, no matter what happened. Before we knew it, it was time to go on. I remember squeezing Allison’s hand right before the curtain went up (as she too was going on for the first time) and we were off to the races. The second and third times going on were a lot less hectic. It was more about trying to own the moment and be courageous.

Understandably, you’re less prepared for your understudy role than for your main track. How do you stay in the moment onstage when technical aspects like lines & blocking aren’t as set in your muscle memory?

Hmmm, tis the question. I often feel more fearless onstage than off. In “real life”, I can feel quite timid and shy, but onstage I feel like I can scale walls. So, there was that. The first time I went on, I felt a huge amount of imposter syndrome – “Are the other actors wishing I was someone else?”, “Am I making their job harder?”, “Am I playing the part the way that serves them?” But after a great pep talk from my director, I felt I could take more space and allow myself to bring more of myself to Georgiana when I went on for the second and third time. By the third show, I was having fun. Georgiana is an amazing human to embody and the cast of Just to Get Married are dream players to do it with. So why not try to enjoy it?

If you make a slip, how do you recover?

In rehearsals, we often talk about “instant forgiveness”. Being an understudy is a task of continued resilience. It won’t always go well. You might say the wrong word. You may fall. But, when it happens, you have to let go and move on, because guess what, you have more story to tell. Sometimes I’ve come offstage to take a breath and think: “Well, that went poorly,” but then I remember I have a lot more Cecily Hamilton to fight for and, ultimately, it isn’t about me. Luckily, I am surrounded by the most excellent cast, crew, director and friends and family who buoyed me.

How do you approach performing violence, intimacy and other choreographed one-on-one action with another actor as an understudy?

During the aforementioned blocking rehearsals, you do a fight rehearsal with the other understudies and a fight captain. I was lucky because I was able to practice my fight with Allison because she also was an understudy. As for intimacy, you negotiate that with your scene partner. Because I went on before I had a chance to do my understudy run, my first kiss with the character of Adam happened on stage.

Were you able to attend full costume & wigs fittings before going on? How are these aspects of the production prepared in case an understudy is needed?

Before going on, I had a costume fitting at the theatre. Luckily the clothes fit. We didn’t have a wig fitting beforehand, but as I ended up using my own wig (but styled differently), it worked out.

Is there anything else we should know about understudying in 2022 or in general?

Understudies and swings are the untold heroes of the Shaw Festival.

In Cyrano de Bergerac, I, and Courtney Ch’ng Lancaster before me, had to learn an intense sword fight with Tom Rooney (do you know him? are you familiar? he’s quite good). It took me weeks to learn it. Hours and hours and hours. But do you know who else had to learn it? Our understudies – the super talents that are Jacqueline Thair and Patrick Galligan. They would get together once a week and sword fight, unpaid and on their own time, on the off chance they might have to go on. They never did. I remember asking Jacqueline if she wanted to do a show and she said she didn’t, but I can tell you, having watched her do the fight a number of times, she ROCKED it.

Let me also take a moment to give a shout out to our amazing swings at the Shaw Festival – including Kerry Ann Doherty, whose sole job is to be ready to go on in any number of shows in any number of parts. I don’t know how she does it. Her dedication and courage inspire me.