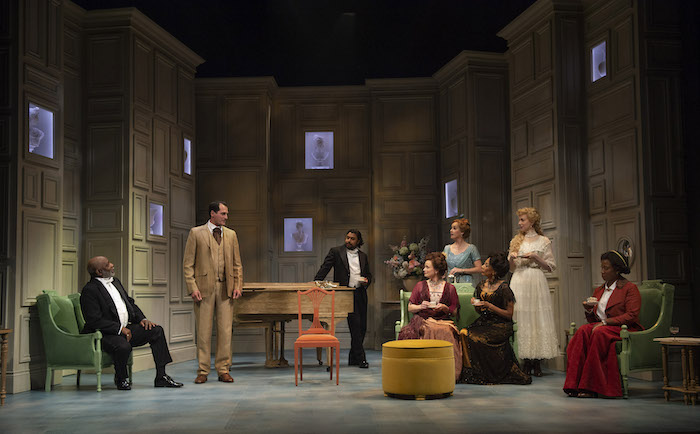 I’ve written a lot over the past decade about the limitations and obligations of The Shaw Festival’s strict mandate. Though current Artistic Director Tim Carroll (following the bold Jackie Maxwell before him) has pushed against decades-old restrictions to allow space for more contemporary and inclusive work, the fact remains that the core of the mandate still dictates the majority of what the festival does- plays by George Bernard Shaw and his contemporaries. It’s a fruitful time period, at least, but not one that includes a great many different voices. So what a joy to find Cicely Hamilton’s perspective so beautifully uplifted in this excellent season.

Just to Get Married artfully hits all those familiar Shaw Festival features as an early twentieth century British drawing room play. Lush sets, sparkling dresses, and spectacular wig work support the company’s capable performers as they do what they do best with their RP accents and fits of wit.

But Just to Get Married breathes new life into the usual comedy of manners and marriage. Nearly every female character in a play from this time period faces the same central problem as Hamilton’s Georgiana- the requirement of marriage is life or death, regardless of love. But in Just to Get Married, this relatable perspective that is so often subtext becomes the text itself by allowing the heroine to actually voice and act upon the tension rather than simply swallow it. She tells the truth when a lie would hurt less; let’s put up her statue in the town square.

Of course a woman who says the quiet part out loud is far too often reacted to as a villain so it’s key that the Shaw Festival has cast one of its most imminently likeable leading ladies in the role. I was sad to miss seeing the lovely Kristi Frank in her first leading non-musical role but her understudy Katherine Gauthier capably took over with just a few hours to prepare. Georgiana is a true leading lady who completely steers the play (and talks A Lot) so the feat of the last minute replacement added a fun sense of adventure and palpable pathos to the production. The ever-steady Kristopher Bowman’s performance as the boring nice guy Georgiana is expected to marry adds a charming and astute contrast to the leading lady’s sparkle (especially when augmented with a dash of thematically useful understudy frenzy). The rest of the cast sort of falls into the shadow but I’m here for the story of a woman who takes over a room.

Just to Get Married is the best sort of Shaw programming, a refreshing treasure unearthed from well-worn ground. It’s every bit the mandate, which doesn’t have to be a bad thing.