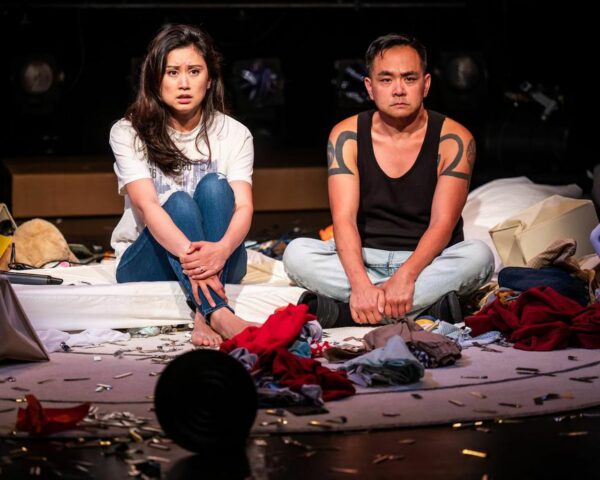 Kim’s Convenience makes me a little bit sad. Don’t get me wrong, the hit CBC show is never even a little bit sad. That’s what makes me sad. Five seasons of lighthearted sitcomery, a controversial ending marred by behind the scenes drama, new CBC shows for two of its supporting actors, and post-Canadian major franchise fame for the man who played the role Ins Choi originally wrote for himself- these are the things Kim’s Convenience will be remembered for. I could cry right now. When Ins Choi’s hit play about Korean immigrants running a convenience store in Toronto made the jump from its post-Fringe home at Soulpepper to the CBC, it lost a lot of what made it special. Mainly, it lost the sadness. There’s a darkness to Choi’s playwriting that’s completely missing from the sitcom version, an unflinching acknowledgement of ugliness, sorrow, and harsh human flaws that made the overarching sweet simplicity of the storytelling work so well. Though Bad Parent isn’t a follow-up that matches the quality of Choi’s most famous work, it feels like the Ins Choi I remember and I realize now just how much I’ve missed him.

Bad Parent is a little goofy in its style- perhaps a direction problem, perhaps a performance one- but it gets a lot right in its brutal honesty on a topic we all like to pretend is sunshine and rainbows even when we all know it isn’t. Choi deploys a fourth wall breaking device to mixed effect in this show which is markedly more theatrical than Kims, complete with conflicting unreliable narrators and effects-heavy flights of fancy. The actors each play a second supporting character who contrasts or parallels their main role in their onstage spouse’s life. This device shows off Josette Jorge and Raugi Yu’s range but it also lends to a broadness that undermines the grit a little.

In Bad Parent, no one is saying anything we don’t already know, the point is that they’re saying it out loud. No one is right. No one is all that likeable. And there are no easy answers. It’s unpleasant and ugly and uncomfortable despite being generally a pretty goofy comedy. That’s the real Ins Choi. Life isn’t a sitcom, it’s a grungy one-act dramedy performed for a half house of people trying not to cough.