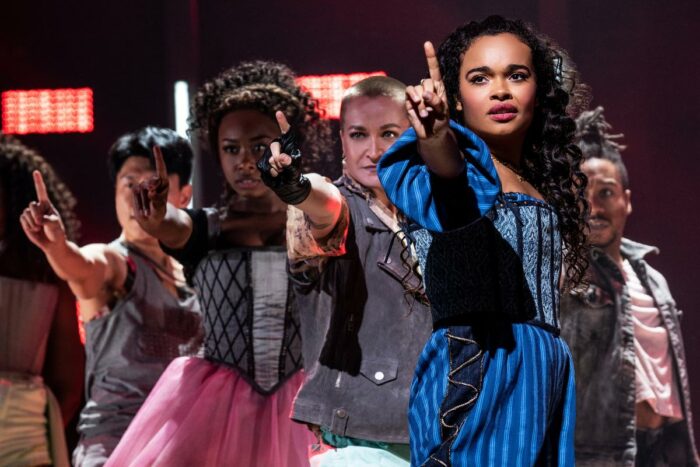 The term “jukebox musical” is used to describe two completely different types of productions. It’s a general label thrown onto anything that uses pre-existing songs instead of original music and is thus very often misapplied to biographical musical plays like Jersey Boys or Beautiful where all the music is diegetic. In this context, I completely understand the frustration with their ubiquity. But the claim that jukebox musicals lack the artistry of all original musicals is just plain false when you’re talking about a real jukebox musical, one that uses existing music to craft a totally original story. If a musical with an original score is akin to a painting, a great jukebox musical is a sculpture- the physical entity already exists, it’s a matter of forming it into something new.

& Juliet is a very silly show with a pretty flimsy premise and some very dumb generational pandering (one of the main characters is named for a meme) but it’s got more going for it than the nostalgic thrill of perfect turn-of-the-millennium pop tunes.

Max Martin’s songwriting catalogue is so vast that you could probably tell just about any story by drawing on specific songs. Personally I find “what if we fixed Shakespeare?!” stories a bit gimmicky (I literally saw two last week) but book writer David West Read took a tired premise and ran, mining Martin’s generation-defining earworms for every ounce of character complexity he could find. And he found plenty. The Britney Spears hit “I’m Not a Girl (Not Yet A Woman)” finally gets to be the binary deconstructing self-discovery ballad it always kind of wanted to be while the bubblegum “…Baby One More Time” is brilliantly weaponized as an anguished wail from just outside the clutches of a toxic relationship (Lorna Courtney comes out of the gate shattering the rafters as the titular not dead girl). The Backstreet Boys repertoire does a lot of the heavy lifting (three of the first four numbers are literally just the first three songs off Millennium) and “Shape of My Heart”, which always sounded a bit nonsensical to me in its purely pop context, is put to particularly effective use. Celine Dion’s “That’s the Way It Is” is a brilliant showcase for Betsy Wolfe who is strong and funny and fun as Anne Hathaway even if all of her ideas for making Romeo & Juliet better were for sure making it worse. The always great Stark Sands is delectably infuriating as Shakespeare and Ben Jackson Walker is electric as the late-arriving Romeo. Melanie La Barrie’s straight-to-the-heart delivery of P!nk’s “Fuckin’ Perfect” perfectly highlights how much real storytelling material exists under Martin’s perfect hooks. I’m not totally sold on the story of this musical but the feelings expertly extracted from the songbook, those are a slam dunk.