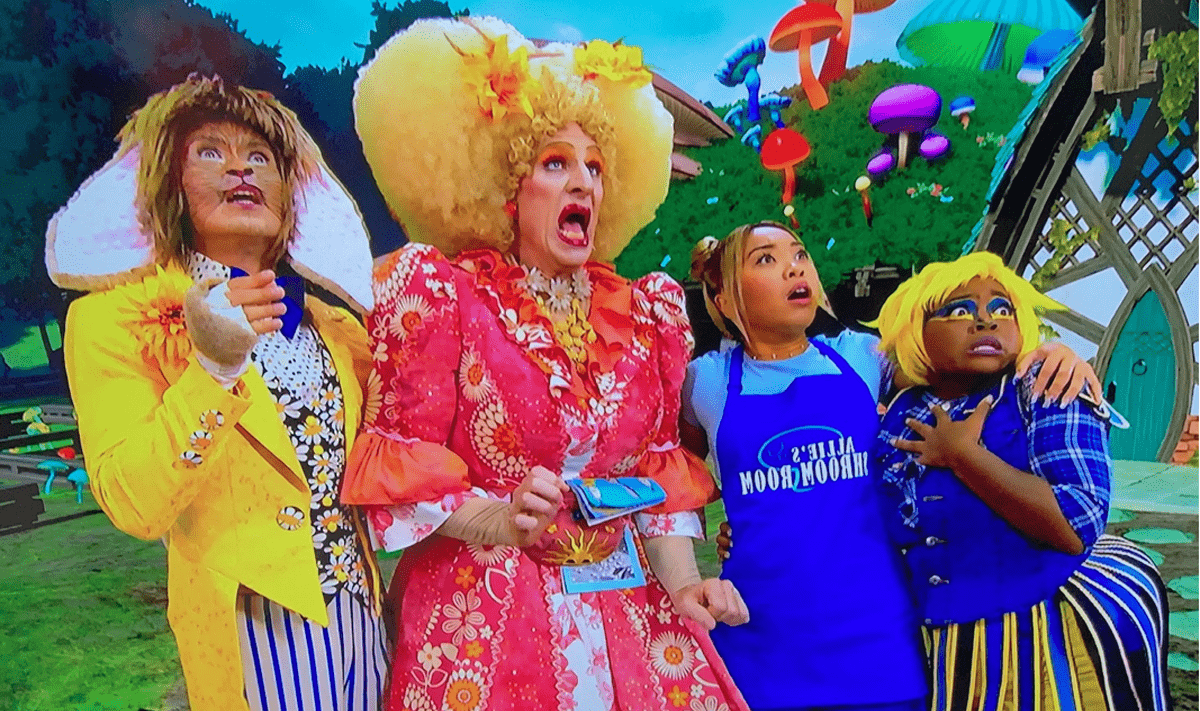 Christmas time in Toronto always has several staples, from the Christmas Market in the Distillery District to the utter chaos of Eaton Centre a week before Christmas. One of the long standing traditions has been the Ross Petty Pantomime Christmas performance. This year Ross Petty has brought it back in a digital version again with Alice In Winterland. Delivering a fun and entertaining family adventure that perfectly captures the spirit of the Pantomime performances, while also adding in a new dynamic element of this year of a choose your own adventure option for families to dictate where the story goes.

The story itself follows our hero Alice (played by Kimberly-Ann Truong in a performance that is fun, joyful and warm) as she begins to open her first mushroom shop and greets her first customer Plumbum (hilariously portrayed by Dan Chameroy) when an evil ice queen (you know she is evil because the word boo comes on screen when she is introduced) Frostina (played by Sara-Jeanne Hosie) shows up to enact a rather….chilling (sorry not sorry) plan to freeze the land. Alice and her friends must embark on a journey to stop Frostina and her….cold ambitions (I’m not sorry).

The story itself is a classic fairy tale adventure but is sprinkled with Ross Petty fourth wall breaking cheekiness and humor. Frostina and her assistant Algor (played by Eddie Glen) have particularly hilarious back and forths where they poke fun at the traditional fairy tale narrative structure. Along the way Alice and Plumbum run into various Alice in Wonderland characters and each one leaves a distinct impression. Chespfizer Cat played by Thom Allison wonderfully embodies the mischievous and mysterious nature that makes the character so famous. The show also does a good job of sneaking in just enough under cover mature adult jokes and references that would make the grown ups in the audience laugh and the show itself draws on current pop culture to keep the jokes relevant and fresh. One character introduction makes me wonder if the bit would have ever been written if not for a certain ummm legalization.  Every performer involved brings a high energy performance that is rooted in, “hey let’s just have some fun for the families,” and it works to make it an engaging show for kids and adults alike.

The performance successfully brings in elements of the traditional staged versions of Ross Petty productions to the screen. From the sets that instead of going for a traditional film real world look, opt instead to look like the backdrop of a theatrical performance, to the connections that the actors make with the audience to bring back that interactivity that made the live shows so much fun to attend. Running at just under an hour, it is the perfect length for families.

The choose your own adventure element also works well in how simple it is. Instead of long video, the performance is presented in Youtube segments where at the end of certain videos you will choose which path to take using the embedded youtube video links in the video to make your choice. One technical hiccup I noticed is that the Next button was only located at the beginning of videos which means once a segment is done you have to replay the video to the beginning and click the Next button. This I feel would have made more sense to have the button at the end of the segments or available all throughout.

What does make this version much different from the linear movie, is that the choices you make do effect the story in a way that rewards good choices but also punishes bad choices. I won’t go into detail, but it feels inspired by classic choose your own adventure books where one choice can lead to treasure and the other can lead to getting eaten by a dragon. Further experimentation on this format would benefit from seeing how the linear storyline can progress despite the option chosen and creating more offshoot adventures that could be had while going through the main story.

When I think of the Pantomime by Ross Petty productions I think of family fun, interactivity that doesn’t feel forced and is engaging for kids, a nice balance of cheeky fourth wall breaking humor and enough tongue in cheek adult jokes for the parents. Alice In Winterland continues to deliver on those promises and with having now the ability to choose your own adventure, the digital version of these performance can truly become a unique family holiday experience.