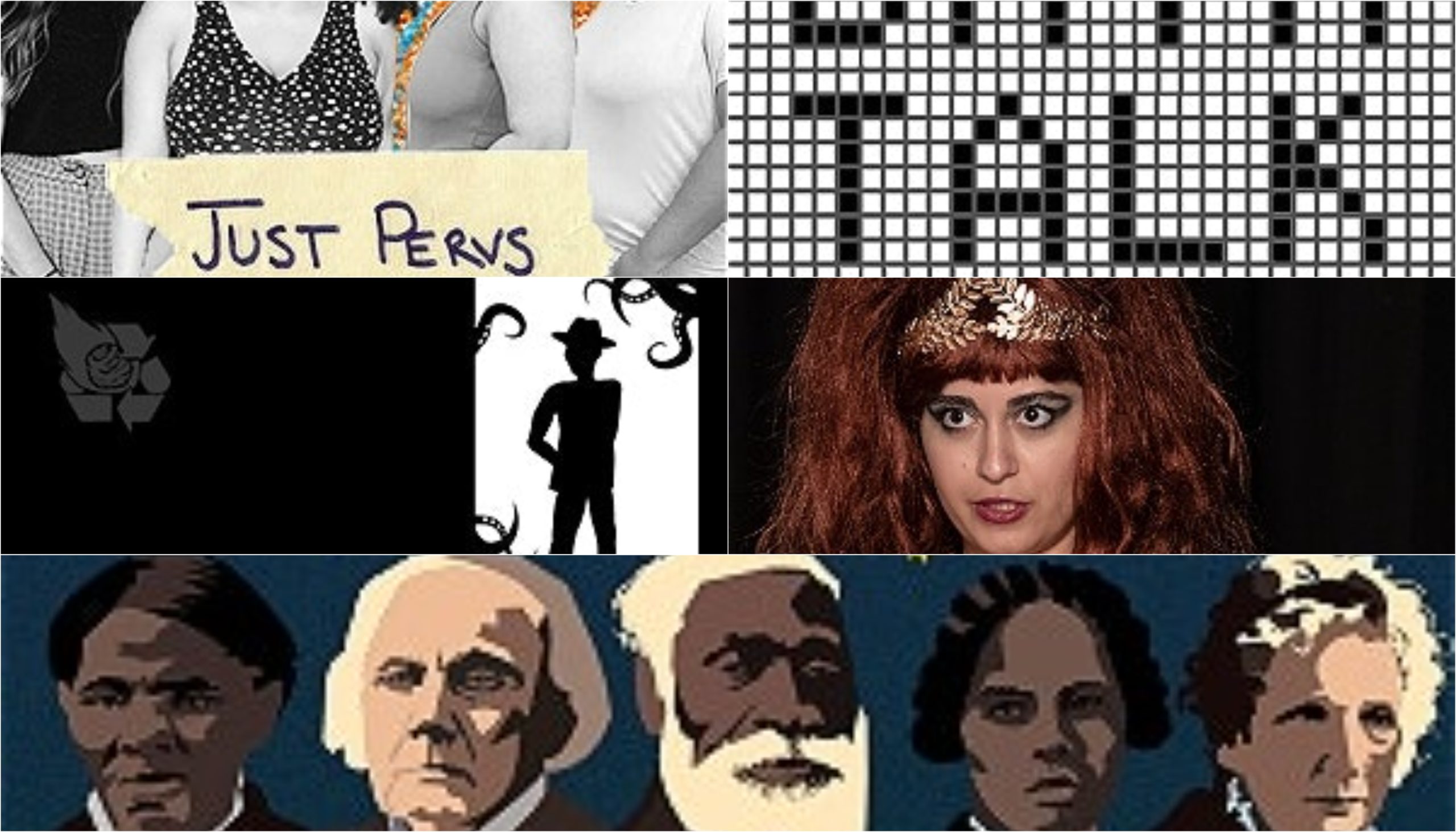 It is good to be fringing again! I first want to take this opportunity before I dive into the reviews to express my gratitude, respect and thanks to everyone involved with the Toronto Fringe this year from the artists to admin to box office just everyone. It has been a long and hard road adjusting and re-calibrating but something truly special has come out of all this. I do hope that the progress that has been made with the new artistic and accessibility possibilities that have been discovered during this pandemic will continue.

Well now this is a first for this reviewer. For the first time I will be reviewing a play not as a live performance but as a piece of text. So, without further ado let’s dive in. BATH TALK takes place as one would expect a bathroom. A place many would call a place of refugee but in this play, the bathroom becomes a place of confrontation. A character just titled by the name HIM is met by a spirit only known as HER.

What follows is a compelling text adventure of identity, privilege, and struggle. The spirit reveals itself to hold a grudge against HIM and a lengthy conversation about those who inherit privilege and the harm that is caused by that inheritance. It is a stuffed piece that covers a lot of topics around colonization, privilege, and sexism to name a few. The switch between different languages also serves to reinforce how universal privilege and oppression is and as the conversation continues the spirit HER grows more powerful.

Further development of this piece would benefit from now expanding on the relationship between HER and HIM that would deepen the bond and anger between them. There is a compelling spirit vs live body conflict that is happening in these words, and I look forward to seeing that continue to develop.

JUST PERVS is a just hilarious, at times disturbing and poignant story of finding yourself, discovery, coming of age and sexuality. Based off the short story by Jess Taylor it follows four girls in high school that begin a revolution that aims to subvert sexuality and proudly establish themselves as pervs. They are fighting for a cause to be free and liberated. The story then follows them as they graduate high school and lose track of each other but the journey they started continues. This is a show about self discovery in a world that often limits and shames self discovery. It is a show that ranges from zany breakdowns of fancy dinners and gender stereotypes to having grounded and real conversations about sex, self, and oppression.

It is a deeply insightful and honest story that is supported by strong performances by the entire ensemble and some unique camera work that feels both purposeful and experimental. Several scenes are set up as choreographed pieces and often, the dialogue is spoken directly into the camera as if to address the audience instead of the scene partner. That second aspect results in lots of cuts that first felt unnecessary but when you consider the intimate nature of the material, those shot choices make sense. It does however make this reviewer wonder what would have happened from just allowing the camera to stay in place and capture the raw honest conversations and the images that would have created without the need for so many cuts.

Questions about camera shots aside, JUST PERVS reinforces something that communities have been fighting for. That people deserve to discover themselves, to be who they are, to take their time and be proud and own their sexuality and their liberation. The word perv is deconstructed in this show in a way that I walked away from this production having at least learned a new point of view on the word. And even if that was all I had taken away, JUST PERVS accomplished what it set out to do.

A powerful and educational combination of historical documentary and musical performance, the DRINKING GOURD teaches the audience about Canada’s role in The Underground Railroad. This may be the first show, this reviewer has ever encountered that is a musical documentary. As an avid fan of the history channel, this has all the makings of an impactful educational piece that is further amplified using music that ties the story and journey of the Underground Railroad in a way that is both informative and powerful to watch.

Anthony Audain is a versatile and dynamic performer as he is one of our two guides through this story, re-creating the journey of a man making his way from slavery to freedom that is supported by songs first sung by slaves that served a practical purpose of secretly communicating directions to liberty. The second guide is Rob Lindey taking on roles of old man who works on the underground railroad, narrator, and historian. His sections provide helpful context to the story through historical education, and they are nicely balanced alongside the re-enacting sections. These sections though did feel a bit more basic as if just to give information and would benefit from some additional choices to really capture the feel of an historical documentary.

Further development of this piece would benefit from just expanding everything. The less than 22 minutes, run time provided a tight and concise production that accomplished what it wanted to accomplish but now I am curious of what else can be added from this chapter in our history.

Describing itself as a post theatre fantasy and lo fi take on a future high-tech world, POST HUMANUM takes a performative stab at the future with mixed but unique results. The narrative is divided into different sections that tackle a single aspect of the future. Such aspects range from old gods attempting to rebrand themselves to appeal to the new masses, new ways obituaries will be created and live streamed and songs created for robots.

It is an interesting premise and certainly one that has its intriguing moments and bursts of very inspired creativity. Given that is more of a theme show, this reviewer looked at the individual segments as their own piece and how well each segment served the overarching message. This is where results are mixed. Some sections such as the obituaries offer an interesting alternate version of death and remembrance and the alternate future versions of old gods trying to appeal to future generations are quite funny. However, sections like the beginning movement about the fast pace of life has elements that are not clear in how they add to the idea presented in the intro of the segment. Despite the questionable clarity of some of the segments, the performers fully commit, and performances range from more outlandish almost cartoony performances, to grounded discussions about death and the future.

This is an interesting show that explores the future and while not all of the elements add up, there is a good deal to find intriguing about this show. Further development would benefit looking at all the segments and modifying elements that don’t serve the message of the segment or the overall message of the piece. The future as both a time and concept holds so much potential for artistic exploration and I am glad this show tackled it.

Taking heavy inspiration from classic sci fi radio plays and 1930’s aesthetic, DESTINY SPECIAL AGENT ACE GALASKI embraces it’s roots to highly entertaining effect. Staged as a 1930’s radio play recording session, our story follows a group of workers at the Giant Book Of Destiny as they deal with a crisis brought on by a distracted fact checker (I was gonna make a political joke here, but I think that would just be more upsetting…. ok back to the play!). To solve this problem agent Ace Galaski must find a back up copy of the book before Destiny is rewritten and the crisis gets even more dangerous.

If there was one word to describe this production, it would be fun. It is a delight to watch a piece where everyone clearly had a great time making it, from the writing to the performances, to the design (loved the foley elements!). This is a show that embraces its silliness with confidence and enthusiasm. Special shoutout to illustrators Madeleine Patton and Liisa Kallasmaa and sound designer Maissa Bessada for their work in both capturing the 1930’s vibe (the audio modifications to the performer’s voices to give them a more grainy/ old timey radio sound is spot on) but also enhancing an over-the-top story with illustrations and effects that interject fun elements into this radio (video?) play that don’t break the pacing.

Where this reviewer would love to see the piece develop from here is experimenting now with different time period aesthetics to see what effect will have on the story. If the work is still approached with the same amount of fun and joy as seen in this piece, then it shall continue to be an entertaining success.