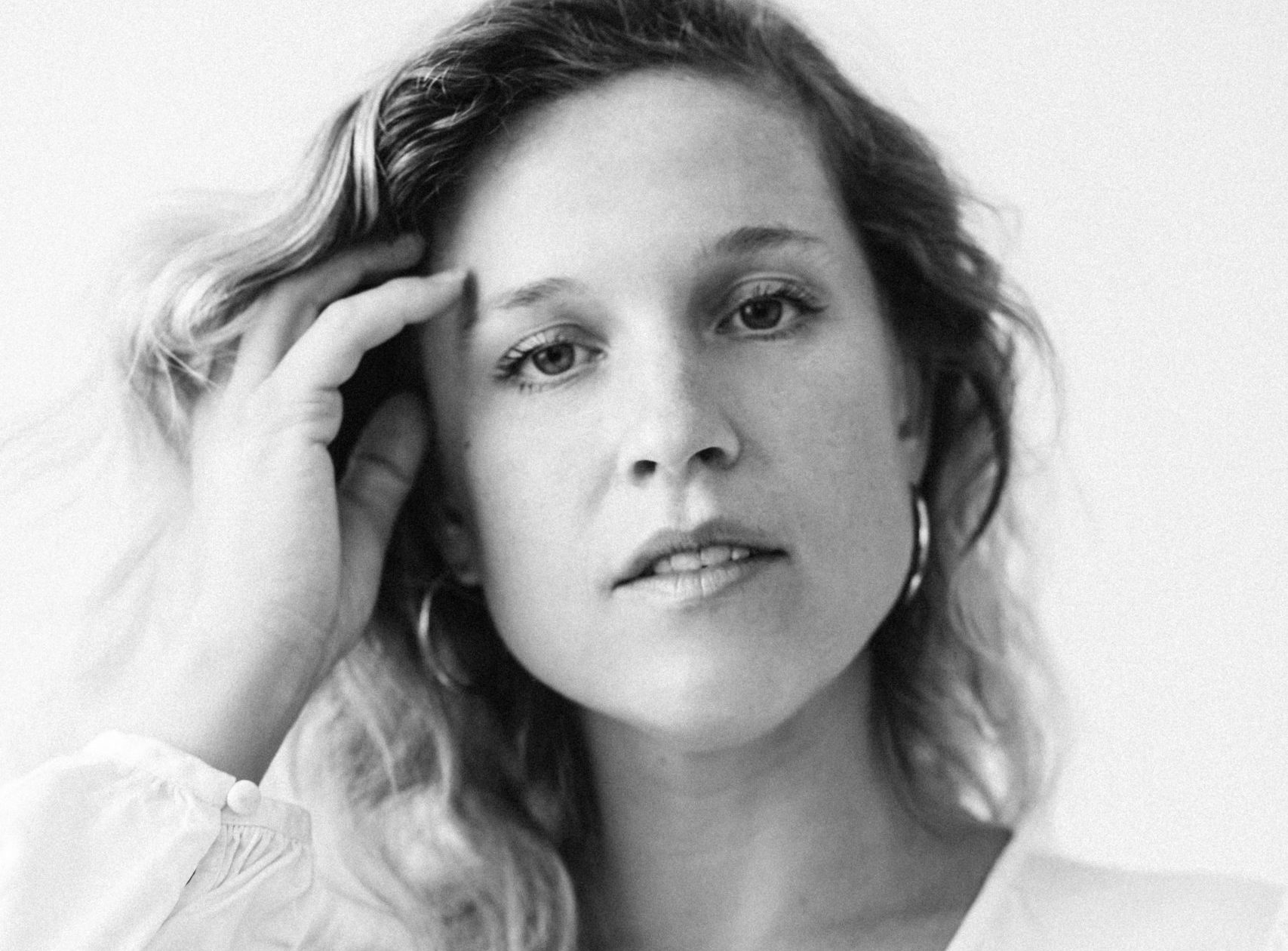 Eclipse Theatre’s limited run of Sondheim’s Sunday in the Park with George at Toronto’s Jam Factory last March was one of the last pieces of theatre we got to see before the COVID-19 pandemic shut everything down. Thankfully, that excellent production gave us the memory of Tess Benger’s effervescent and thoughtful performance as Dot, which helped carry us through the many theatre-less months that followed and won her our 2020 Critics’ Pick Award for Outstanding Performance in a Musical.

We last interviewed you back in 2019 for your Girls Like That nomination. Give us a quick update.
When we chatted last, I was in the middle running Cabaret at the Grand in London, that was a really amazing experience. After that I had a beautiful summer biking around Toronto and growing flowers and veggies in my garden. I did some more plays including Sunday in the Park with George, and a week after that the Pandemic shut the world down. I still managed to garden a lot, and most importantly I launched a not-for-profit called The Canadian Green Alliance with my business partner and fellow actor Julia McLellan.

How did you get involved with Sunday in the Park with George?
I saw the E-drive for the audition and submitted. I really wasn’t sure what direction they were planning on going with Dot and there are so many other fantastic female characters in the show. It felt like more of a general submission with secret hopes that I would get seen for Dot.

Did you have a connection to the piece before joining the production?
I did! I did the show in 2016 at Talk Is Free Theatre in Barrie where I played Yvonne. It was directed by the wonderful Steve Ross and starred real life couple Glynis Ranney and Mike Nadajewski (two of the kindest, warmest, most talented people I will ever know in my entire life). It’s funny because before doing the show, I didn’t gravitate toward the piece. In my second year at Sheridan College we took a trip during March break to see shows in NYC. The day that we had tickets to the evening show of the West-End transfer of Sunday in the Park, we also managed to win the lottery for the Chorus Line matinee. I remember I was in the front row for A Chorus Line and it was the cast who were in Every Little Step (a documentary following the audition process to book the show…..which is a show about auditioning…I highly recommend it). Anyway, essentially I cried through most of A Chorus Line matinee and by the time we got to our 8pm Sunday in the Park seats in the nosebleeds I was so exhausted I just sat there being like “hmmm……I guess it’s just not for me.” But then when I did the show with Glynis and Mike I was cracked open by this brilliant, poetic love letter to art and life.

What were some of the unique elements of Dot that you brought to or chose to highlight in the role?
Bernadette Peters so brilliantly originated this role, and her take on Dot is iconic. I was worried I wouldn’t have access to my own version. But in watching some clips of Annaleigh Ashford doing the role on Broadway in the most recent revival, I saw such a drastically different take on the character (not to mention also having witnessed Glynis’ gorgeous portrayal). Annaleigh had such a unique playfulness and fire, it felt freeing and somehow gave me permission to really make it my own.

What is so beautiful about Dot and George is that you think at the beginning she is the student, and by the end we learn that she was the teacher all along. In the portrayal of their relationship, I felt strongly about the passion between George and Dot and how it keeps both of them from leaving, I wanted that to be really believable. There is a fire with George that makes her feel so alive in a time when it was preferred that woman exist in a much more invisible way.

How did the immersive site-specific elements come into play for you?
This was my fourth immersive-site specific musical. At first it feels daunting, but quickly becomes very freeing, because it doesn’t feel like there is a division between the actors and the audience, we become one, going through the story together.

I had the good fortune of getting to sing to the audience a lot in Dot’s songs. There are now lines in songs that I completely associate with certain audience members.

The production had a very short run. Was it frustrating to have to leave the role so soon after opening?
No, it wasn’t frustrating. The experience was incredibly rich. We only ran for a week, but between friends, family, and the support of the community, every show ended up being full of really important people in my life. I think it happened the way it was meant to happen….That being said I would play the role again in a heartbeat.

It’s a famously demanding score. What was the most difficult aspect of nailing the role?
I was really familiar with the score having done the show, and I got cast 6 months before our production, so I had lots of time. I listened to both the original soundtrack and the revival a lot. I usually go on long runs and listen to soundtracks (especially the originals) because I love hearing the orchestrations the way they were intended to sound. I find them very informative as a musician and actor. With Sondheim, the heartbeat of the character is written in, it’s like Shakespeare. But the hardest part wasn’t ever the score. Dot required so much authenticity and rawness to work in the way I wanted her to, so I needed to trust my instincts and get very brave (shout out to Rebecca Northan for teaching my how to breathe and trust my instincts). But in a way that is the beauty of such a short process, if I had 6 weeks with Dot I might be too busy in my head to work from my heart.

Tell us about working with your director Evan Tsitsias.
Evan Tsitsias is incredibly passionate. We spent the months leading up to rehearsal exchanging emails with research and epiphanies and ideas about the show, the communication was really strong which allowed us to really hit the ground running once we entered our 10 day rehearsal period. He is extremely imaginative, which really lent itself to the piece and the immersive way we were presenting the show.

Tell us about working with Evan Buliung and the rest of the cast, many of whom were students.
I was so thrilled to play the part of Dot opposite Evan Buliung who has been a very good friend of mine for over 10 years. I worked at a restaurant in the Annex called The Grapefruit Moon for about 6 years, and that’s actually where I met Evan. He was a regular customer, I knew he was an actor but it wasn’t the basis of our friendship. It took us until Sunday in the Park to work together and I am really grateful for the foundation of our strong friendship going into this complex show. Evan is an incredible actor. Working opposite him raised the bar for my work, there was so much trust and respect and love going out there with him.

Working with the students was wonderful. They were so energizing and supportive. They were working with an incredibly busy schedule with classes and other shows but they were present and professional. It was also very refreshing to work with actors at the beginning of their careers. It is so easy to get bogged down and walk around with your head down on the way to the next gig, but it made me reflect on when I was a student and how far I have come.

Did you have a favourite moment in the show?
I really loved playing Marie, the great grandmother in Act 2. I had so much fun and got to play with the audience and no one could see me giggling because I could hide my face under my blanket and wiggle down in her wheelchair. But if I had to choose one moment it would be “Move On”. Whenever I am feeling a bit lost, I watch Bernadette Peters and Mandy Patinkin sing it (highly recommend). I have been thinking a lot about that song lately, about moving on, continuing to move, keep going, keep changing and growing. My singing teacher David Dunbar always says “when you feel stuck, just move”. I love that.

What are some of the ways you’ve been keeping busy during Covid?
Well, up until December I was working at Farmer’s Markets. I have worked for an amazing chocolate company called Chocosol for about 5 years now, and this summer I also started working for an incredible Brazilian chef at Tapioca Toronto. I work for both companies at Farmer’s Markets all around the city and I love it. It’s important to me to nurture other parts of myself that don’t have anything to do with being an actor. Spending time around farmers and chefs and other makers is hugely inspiring, grounding and important to me.

But mostly, The Canadian Green Alliance has kept me extremely busy. My co-founder Julia McLellan worked with the Broadway Green Alliance when she was in New York working on Kinky Boots, and it inspired her to start a Canadian version. Julia and I were bonding over our climate change anxiety and decided it was time to do something about it. We aim to bridge the gap between sustainability and theatre. We’re composing a national guideline (with the help of experts in each department) to aid theatre companies to create climate conscious theatre from the first meeting all the way to the tear down. We want to be the meeting place for all of the people fighting for sustainability, we have already been so blown away by the people we have met. We want everyone to meet and share resources to ensure that our art form continues to exist and thrive with the planet, not against it. Check us out on instagram @canadiangreenalliance

Do you have anything you’d like to add?
“Anything you do, let it come from you. Then it will be new. Give us more to see….”
-Dot/ Sondheim