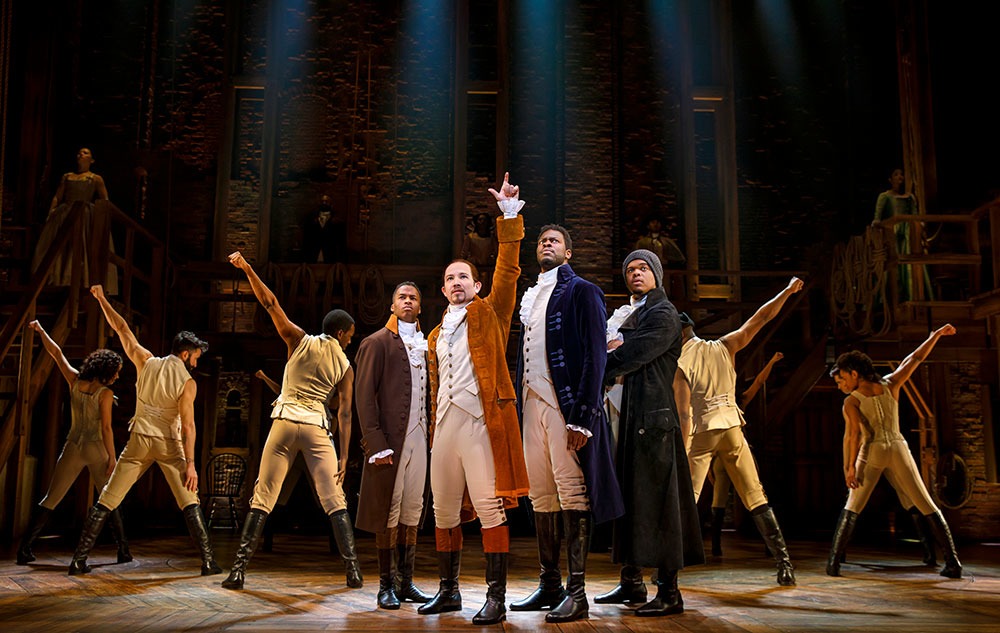 Lin-Manuel Miranda’s Hamilton is the smashiest smash hit to ever smash on Broadway and it has subsequently inspired a cult-like devotion that strains the limits of the word “cult-like” (the intensity is there but the breadth of the fandom defies limitation). It’s a consensus masterpiece- a dense, inventive, skillful revolution of form cheekily set against the backdrop of an actual revolution. To be very clear lest you call for the guillotine, I am not here to argue against any of these labels. But I will admit to putting off writing this review, worn down by five years of this debate raging amidst my theatre-loving circle of friends who aren’t usually this determined in their exaltation. Although “debate” isn’t really the right word at all. Because it’s really just me, timidly raising my hand to suggest that maybe just maybe there is no such thing as a perfect piece of art only to be met immediately and forcefully by a collection of “seriously”s that translate to “how dare you”s.

But if there is one truth I hold to be self-evident, it’s that to love something is to strive to see it fully, as clearly as you can. Being unable or unwilling to reckon with the flaws of a beloved, well, anything effectively renders that love superficial. Question it, pull it apart, stand it up in a context larger than right here right now and see if it has legs, turn down the din and sit with it, all of it; the remarkable will seem all the more remarkable for it.

I understand the “let people enjoy things” instinct, I promise you I do. The world is a hard place to live, simple pleasures are important and not everything needs to be gone over with a microscope. But here’s the thing about Hamilton– it deserves the microscope. It can handle the microscope. It’s the sort of beautiful text that reveals its greatness upon further inspection. And, yes, said further inspection will reveal a few cracks in the gloss but it’s also where you find the good stuff.

The truly legendary numbers off the top of the show float the less interesting later stuff and it’s easy to see the difference between songs that took a year (‘My Shot’, an earned classic that takes infinite listens to fully unpack) and something Miranda wrote on the subway (‘Wait for It’, a catchy “I want” tune that serves its story purpose well but quickly reveals itself to be thinner than you remember). Act two has structural issues that result in tonal whiplash and hazy motivations- and, maybe I’m just cynical, but I’ll never be able to reconcile the over-earnestness of “forgiveness/can you imagine?” in ‘It’s Quiet Uptown’, a song I sort of love but also sometimes think is underwritten but overwrought- but there’s more heartbreaking complexity in act one’s ‘Helpless’/’Satisfied’ reversal than most shows have in their whole runtime. The finale theme of “who tells your story” doesn’t run nearly strongly enough through the whole piece but every time I listen I’m more captured by how completely the central motif of ‘The Ten Duel Commandments’ haunts the Laurens/Philip track. There are a few lazy rhymes, no use pretending there aren’t (the most offensive to me is “in need of a shower” with “global superpower”) but that doesn’t lessen the impact of the great ones (my personal favourite is “enter me/he says in parentheses”) or the metaphorical value of just the sheer number of words in the piece. Miranda’s been quoted many times saying he chose rap because it has the highest number of words per minute and that felt right for Hamilton as a character. That kind of conscientious substance-based style decision is what makes Hamilton great in a fundamental way. I think I can criticize the over-explaining mime elements in Andy Blankenbuehler’s choreography and we can all still agree that Hamilton is a damn good musical.

But maybe more than any of these undiscussed flaws, Hamilton has one truly big problem as it makes its way around the globe and extends its Broadway run into infinitum- the shoes of the original cast are almost impossible to fill. Meaty but less specialized roles like Burr, Washington, and Eliza require excellent performers but there are plenty of those to go around (the tour could use a stronger Eliza but Jared Dixon is as fine a Burr as you could ask for). And there are about a million people who could play the King (So You Think You Can Dance favourite Neil Haskell tries a bit too hard in the tour, pushing a silly character voice when the razor sharp writing of the scene-stealer role should do most of the work for him).

Angelica’s tricky casting mostly just because ‘Satisfied’ is brutal both technically and emotionally (Ta’Rea Campbell fares decently well, and I love that she’s not a size 0, but she falls short on dazzling chemistry and that’s unfortunately Angelica’s most important front) but the real problems are Daveed Diggs and Miranda himself, the two original cast members it’s impossible to see Hamilton without wishing they were there. Diggs’ hyper-specific style so completely shaped the Lafayette/Jefferson track through the workshop, Off-Broadway, and original Broadway runs that Warren Egypt Franklin is trapped between a dense French accent he can’t do as well as Diggs in act one and a straight up Diggs impression in act two. The result is mostly obnoxious and largely unintelligible. I almost think future Jeffersons need to ignore the role’s Tony-winning legacy entirely and just totally de-Diggsify if they’re ever gonna have a shot at getting out from the original performer’s shadow.

Which brings me to the the man himself, Alexander Hamilton. There are better singers, better actors, and better rappers than Lin-Manuel Miranda so I’m definitely not saying that he’s irreplaceable (Leslie Odom Jr. rightly won the Tony over him for his performance as Burr and I expect to fall hard for Anthony Ramos’ Usnavi over Miranda’s original when In the Heights finally  hits movie theatres) but Miranda’s whole ethos is so strongly tied to Hamilton’s that it’s hard to separate the two on a deeper level. If a musical has a thesis statement, it can usually be found in the last number before intermission. For Hamilton, that’s ‘Non-Stop’, a flabbergasted ode to Hamilton’s energy, enthusiasm, ideals, and prolificity, four qualities that it’s an understatement to call “Miranda-esque”. Unlike Diggs, whose iconic mark on Jefferson is all inimitable style, Miranda’s inextricability from Hamilton isn’t about his walk or voice or specific line readings, it’s on a character level. It’s a terrifying task to live up to but still it’s kind of astounding that Joseph Morales seems to reject the task entirely. His Hamilton is mild-mannered and calm, even soft-spoken, which is a very odd thing to call someone who speaks that many lines. His sweetness is lovely in those tricky act two scenes that never really worked for me before but the interpretation feels like it’s fighting the text more than makes sense. Miranda’s verse has the same rules as Shakespeare yet Morales rumbles through his line endings as if he’d learned it phonetically and never lives up to the energy or intensity that other characters speak of when they speak of Hamilton. When he barks “call me son one more time!” at Washington, it sounds like a polite request. I’m not saying that Lin-Manuel Miranda is the only person who can ever play Alexander Hamilton but what I am saying is that capturing the writer’s energy is perhaps more of a prerequisite for this part than for any other.

The touring production currently on its long-awaited Toronto stop does feature two performers who top the originals (I caught the show back in October 2015 before the OBC started disassembling). Elijah Malcomb steals every scene he’s in as John Laurens/Philip Hamilton, winningly capturing the rash upstart energy that makes both characters both irresistible and tragic. But the real unexpected thrill for me was Darilyn Castillo who takes on the somewhat thankless track of Peggy Schuyler and Maria Reynolds and somehow makes a meal. Her Maria is vibrant and alluring to the point where ‘Say No To This’ almost didn’t make me cringe for the first time ever and her Peggy is genuinely hilarious, packing so much personality into her one famous line that “and Peggy” feels less like an easy joke and more like a clever nod at the story not being told. Hamilton has a throwaway line in ‘Helpless’ that hints at an interesting dynamic with the extra sister and it’s never been so intriguing as with Castillo in the role suggesting that the things she may be “confiding” in Alexander might be more than meets the eye.

In general the touring production feels slower than the original, touring productions often do, and there really is something a bit off about seeing it outside of the States and New York in particular (all that “greatest city in the world” stuff never sits well with me but it’s an especially odd moment outside of the Broadway bubble). It’s worth seeing, of course it is, but with tickets so scarce and prices so high and the cast so so-so, I don’t know, maybe just listen to the recording again. And again. Then again and again and again until you’ve found what’s there to be found. Then listen again because there’s more, good and bad but all illuminating. Hamilton to me is not about that singular moment in the theatre the way so many musicals are. I’ve seen it live twice now and neither experience left me as bowled over as it was meant to. But sometimes on a random Tuesday I’ll put on the OBC recording and get hit upside the head with the feat of it. It’s those moments, out of the theatre, on listen #472 or whatever it is, that I really appreciate what the too-big-to-be-a-cult cult sees in Hamilton. It’s not perfect, and I do think it’s really important that we can talk about that, but art doesn’t have to be perfect to be great; it shouldn’t be, it can’t be, but we can love it anyway.