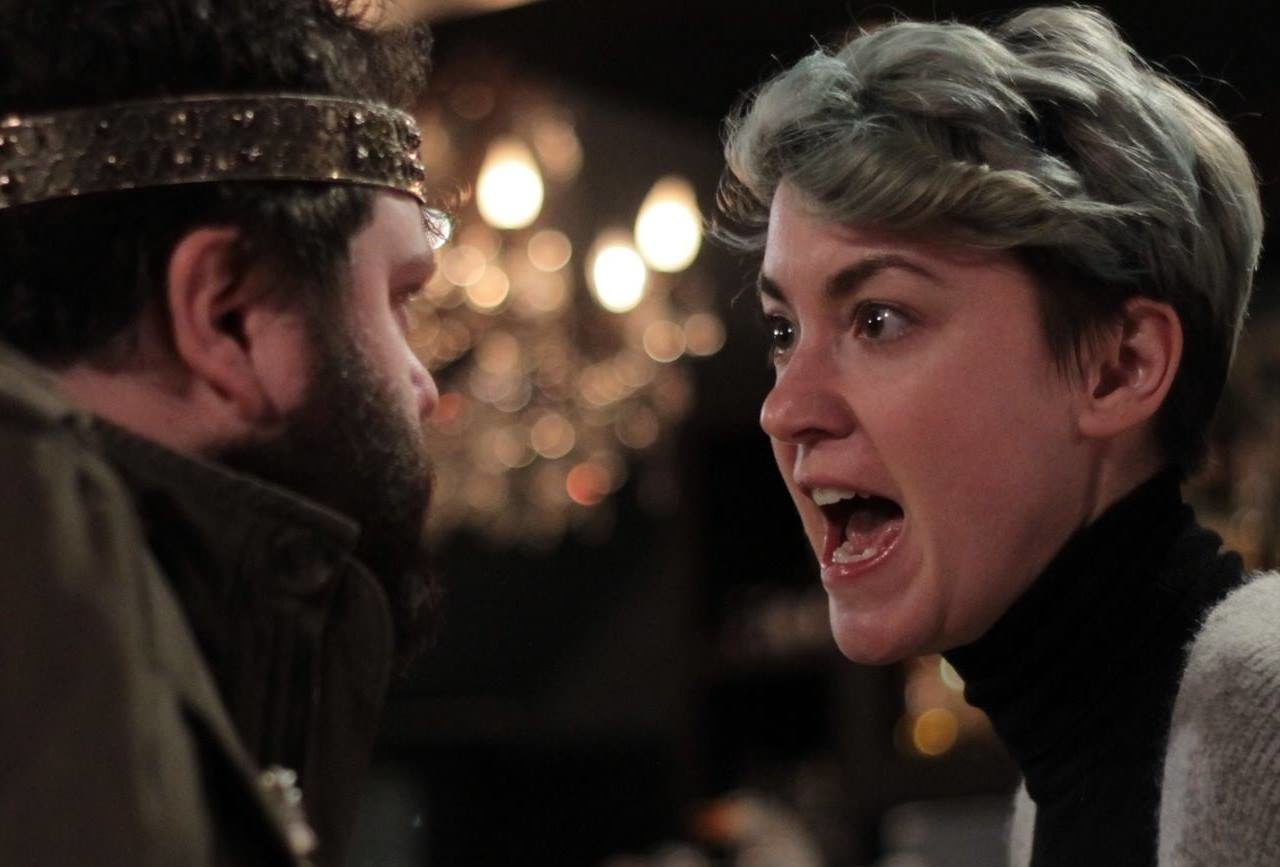 Catherine Rainville is a multi-hyphenate artist whose work performing, directing, producing and designing for site-specific indie favourites Shakespeare Bash’d has never failed to thrill and surprise us. She’s nominated this year for Outstanding Supporting Performance in a Play for her fierce and grounded performance as Desdemona in the company’s stirring production of Othello last February.

Can you remember your first experience with theatre?
I grew up in the theatre community so my first few experiences where running around GCTC in Ottawa, in the old building on Gladstone, or getting lost in the backstage maze at the NAC. My father would be working at either one, and I’d often be backstage during rehearsal or after a show he’d performed in.

The first time I acted on stage was in grade 7. I was the Hot Box Waitress in Guys and Dolls. I had no lines, so I just chewed bubble gum and gave people cut eye. I got lots of laughs and it was an incredible learning experience. My best friend at the time was Natalie Moore. She’s an incredible dancer and singer; I was the awkward side kick in that relationship. I was so envious of her but when I walked out and the audience was with me and I got those laughs, I realized how great the part was. It was exactly right for me at the time. I’ve always appreciated the smaller roles. They can give you so much. Also, Natalie’s mother made the costumes and I had an apron across my front that just said Hot Box. This may be why I got the laughs, but I choose to believe it was all my amazingly timed eye rolls and bubble gum bubbles.

When did you know you wanted to be an actor?
I don’t think there was a clear moment when I made the choice. I obviously chose to pursue it at one point, but I feel that it is something I have to continue to choose all the time. I actually took 2 years off after a few years working, post theatre school, and it took me some time to come back to it. Living in this city and working full time while also trying to make a career in theatre, is incredibly challenging. Part of that challenge is continuing to choose it over and over again. Questioning and reaffirming, back to doubt and around again. That part can be exhausting.

What’s your favourite role you’ve ever performed?
Ohhhh that’s hard to say. Desdemona is certainly up there, which surprised me. Cardinal Pandolf though was so much fun. I have a special place for Rosalind as well. Playing Cordelia to my father’s Lear was also pretty special. Yeah, I can’t pick just one.

Do you have a dream role you’d still like to play one day?
Really my dream is to just keep doing the work. Obviously, I’d take a kick at the can playing Hamlet but I’d also love to play something totally new and create it from myself.

How did you get involved with Shakespeare Bash’d?
I’ve known Wally (James Wallis) for almost 15 years. He actually approached me to do some set and costume design years ago and I got to know Julia [Nish-Lapidus] a little bit better at that time. I didn’t really know what I was doing so I just went to every rehearsal because that’s what I would do as an actor. Wally got a job that meant he had to miss a rehearsal for a night, so I stepped in and directed a few scenes. I think that was the moment we all said “Hey, we like doing this together. This really works.”.

Slowly I took on more and our professional relationships solidified. I took on smaller roles and found a lot of satisfaction with that. I learned so much from Wally and Julia, and watching other actors in the company.

What drew you to the character of Desdemona?
Honestly, I was terrified to play her. Which is probably why it was a good thing for me to do. I was much more drawn to Emilia, but I am so happy that Wally asked me to take her on.

Once I started going through the part, I got very excited to uncover the person I saw her to be and investigate ways to show that through the text.

What is so interesting about Desdemona is the way men in the play describe her: gentle, soft, graceful, obedient and so on, but her text and the way she presents herself is not that at all, to me. She fights fiercely for her love, she’s determined, loyal, smart and incredibly capable of carving a path for herself.

Part of the trap with her, I think, is when someone listens to what others say about her and try to portray that. She is a human being and they all put her on this flawless pedestal. The person that she is perceived to be is unattainable. I was much more interested in her flaws and her humanity. I enjoyed her incredible strength and tried not to judge her for her weaknesses, but rather embraced them.

You always bring a lot of strength and intelligence to your roles. Are you ever frustrated with the limitations of the female roles in Shakespeare’s canon or do you see it as an opportunity to re-contextualize often underestimated characters?
Well thanks so much for that little boost. Definitely the latter. Well, both I guess. There are frustrating aspects, but I also feel like the world is still a frustrating place. Yes, sometimes I wish the stories had more for those roles, or a character could say all the things I want them to. But that isn’t humanity to me.

Sometimes it’s interesting to sit in the moments of silence when we wish we could do something different or say something more. How many times have you walked away from a confrontation and said to yourself “Damn, I wish I had said ______” . Everyone can fill in that blank.

I enjoy digging into those moments and investigating where they come from and how to serve the story and the text, to bring out a layered character. It’s important to me that those roles are not viewed as weak in those moments, but human.

Tell us about working with the rest of the cast, in particular EB Smith as Othello and Jennifer Dzialoszynski as Emilia.
Just awful. Kidding. I was really lucky. EB and I hit it off right away. We took extra steps to stay safe and connected by checking in with each other regularly. Especially during the second half, there was a lot of squeezed hands, nods, high fives, even a simple look, we just generally tried to keep each other present and grounded. We hugged after every run.

Jenn is one of my favorite humans. I’m proud to have worked alongside her. We also had our own rituals for every show. Her pre show…dance? I guess that’s what I’ll call it, is one of the funniest things I have ever witnessed. I’ll let her recount that to whomever is interested. She was by my side every step of the way. She is an incredibly talented actor, fighter and a generous scene partner. This show took an emotional toll on me and she was a huge support, and a fierce Emilia.

This whole cast and process was the best it could be. There were a lot of laughs, hard conversations and support. I couldn’t have asked for a better team to do such a challenging story with.

What were some of the most interesting conversations you remember having with director James Wallis in developing your interpretation of the role?
Wally was amazing during this process. He really facilitated discussions in a way that let each of us speak from our own experiences or perspectives. Always an advocate for text and for story, he took those conversations and married them all in a really remarkable way.

The conversations around my death were very lengthy and we tried many different options. We’d work in a way to present an option and say okay, that did “this” for the moment, then we’d try something else, and see where that would take us. In the end I felt it was important, and we agreed, not to shy away from the violence in an attempt to make it easier to digest. I understand why it was challenging to watch. Having experienced domestic violence, I wanted that moment to be seen and I didn’t want it to be easy, because it’s not.

Did you have a favourite moment in the production?
The moment when Othello arrives in Cyprus and she’s been waiting and wondering if he’ll make it through the storm. EB would run toward be and scoop me up. We did a little slow dance and it was like the whole world melted away. It’s the only moment in the play (I think) where she is truly herself and they are free of it all.

In addition to performing, you also direct, produce, and sometimes design. How do all these different roles inform each other?
I think the best way to learn about what you do is to see it from other people’s perspectives. No one’s job in these processes is a walk in the park and to assume you can do it without someone else’s work is a huge mistake. Each job is a different side of storytelling and I’m really lucky that I’ve had opportunities to try each one.

What are you working on now/next?
Cymbeline! [On stage until Feb 9] It’s sold out but we’ll always have tickets at the door. At the Junction City Music Hall!

Do you have anything you’d like to add?
Thanks so much!