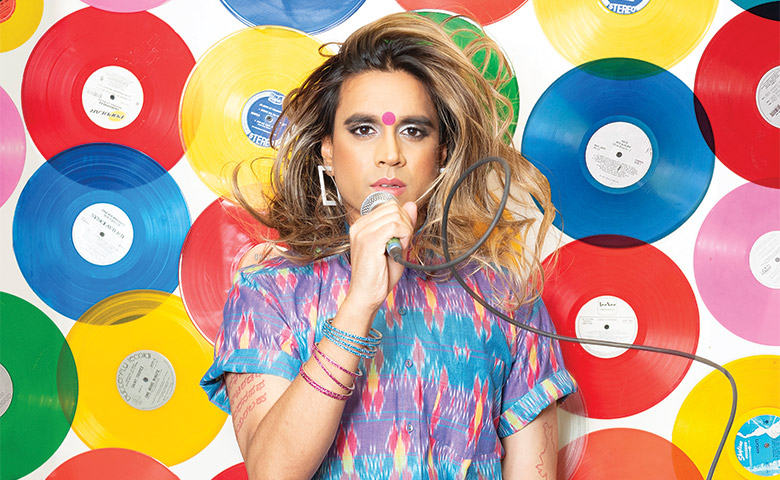 Canadian Stage: How to Fail As a Popstar

How to Fail As a Popstar… Is it a love letter or is it a break up song? After watching Vivek Shraya’s debut play, now playing at Canadian Stage’s Berkeley Upstairs Theatre, and mulling it over for the better part of a full day, I’m still not sure. I’m also not sure it really matters.

In this endearing, reflective, and, at times, frustrating performance, the audience is introduced to a version of Vivek Shraya that seemingly does not fit her public persona. Shraya is an accomplished artist in many diverse forms. She is the author of several award-winning books, written and directed films, released several albums of original music, founded a publishing company, and is now breaking into theatrical performance. But, she is also a failure. Just sit with that for a moment and contemplate that statement, a statement of failure, written immediately after an extensive list of accomplishments that most would be thrilled to have on their resume.

I’ll wait because you might still be thinking about what a terrible person I am for making such a harsh statement about such an accomplished, bright, beautiful person. It’s OK. I understand.

I’m not wrong though. Shraya told me herself that she is a failure. Indeed that is the crux of her debut theatrical outing. The play itself is deeply personal. Shraya is the sole writer and performer. I swooned a little when she came on stage prior to show start and addressed the audience in a luxurious velvet dressing gown, long blond hair with just the right amount of wave, and glitter for days. Thank you make-up artist Alanna Chelmick, costume designer Joanna Yu, and wardrobe coordinator Allie Marshall for ensuring that one of the Globe and Mail’s best dressed had a look worthy of such an event.

The show itself is directed by Brendan Healy (Artistic Director of Canadian Stage) and begins with a song. An electro-pop love song to music called Music Ur the 1 (written by Shraya and sound designer James Bunton), is the first of many covers and original works sung as part of this autobiographical monologue/musical.

From there Shraya tells tales of how her mother first brought singing into her life as a young child, teaching her how to sing traditional bhajans to their spiritual leader. The intention of singing bhajans is to sing directly to God. This motivation inspired Shraya and gave her a sense of self worth and importance in her family and congregation. As the play progresses though, Shraya sings less in devotion to God and more to become a god like, you know, Madonna.

These early stories of growing up in Edmonton, Alberta, in a poor, “brown family” feature some of the most heartfelt and earnest writing in the production. Young Shraya uses her voice to navigate the battlefields of adolescense, bringing her closer to the “pretty girls” and farther from the relentless taunting of pre-pubescent boys, and provided a creative outlet. Stories of performing at school assemblies, or in mall singing competitions are laugh-out-loud funny and endearing. Being only a year older than Shraya, I found myself connecting to jokes about mall food courts and the now defunct HMV and Blockbuster empires, as well as bopping along to classic pop and hip hop tracks from my days in school. Even though I was a devout goth-metal kid in those days, featured tracks from Madonna, Kriss Kross, Mary J. Blige, and others permeated the highschool zeitgeist and found their way into everyone’s Discman or car stereo even if only by association!

Which brings us full circle to the crux of the play – Shraya’s dream, her yearning, and wishing, and wanting to be a popstar, to be that person that EVERYone listens to and loves. Despite near-success and bountiful opportunities, she is never able to break through into the mainstream. So, she is a failure. Which is frustrating. It’s frustrating to see her work so, so hard to make it and still never break. It’s frustrating to hear that Shraya had all of these opportunities, more than most would-be musicians would ever enjoy and still never break. It’s frustrating, almost annoying, to hear her commiserate about being a failure when she has had so much success outside of the musical sphere. Then she brings you back with openness and blunt honesty and you leave feeling all the feels because she has honoured the journey even if the destination was not what was expected.