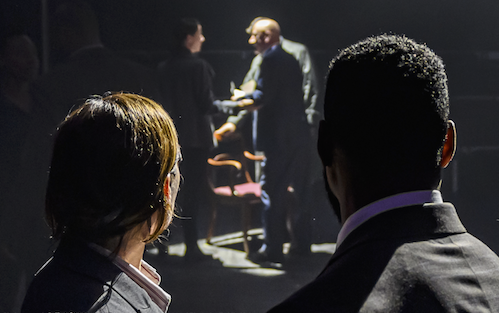 Julius Caesar is a tragedy for the masses. For the uninitiated, many Shakespearean tragedies are at least somewhat familiar because his work has transcended every cultural boundary: of course you know of Romeo and Juliet even if you don’t know obscure 16th century Italian poetry – or Romeo and Juliet. Others that haven’t installed themselves as popular mythology rely on the strength of the text and knowledge of the source material to engage the audience, with mixed results. Caesar occupies its own category as an iconic piece of history and a favourite story long before the bard could work his magic on it. Directors can get creative as they see fit without the usual nod to making the text more accessible or ‘relevant’.

Groundling Theatre Company makes perfect use of that freedom, offering an inventive and thrilling take on Caesar. The play is introduced and interrupted by live-at-the-scene news updates from a Rome in turmoil, a useful framing device for a work that can lurch between plot points and locations. With this director Chris Abraham immediately establishes a distinctive aesthetic that’s dark in every sense and infuses all aspects of the production with an unsettling energy and urgency. The gunfire of a modern warzone punctuates a chilling soundscape that suddenly takes over the scene with the din of a riotous crowd. The seating in the round in an enclosed environment gives a claustrophobic air of being part of a mob or platoon. Lighting designer Lorenzo Savoini slices up the stage with sharp, straight beams – and, when he turns the spotlight on an impassioned orator or gruesome spectre, the whole room is fixated on them. The lights in the audience create an eerie, funereal atmosphere when everything else fades from view.

This is an ideal setting for this star-studded cast to do their best work. Jim Mezon’s Julius Caesar is a perfect study in contrasts – an avuncular but firm leader turned grim, imposing omen. Despite the title, the play is a character study of Brutus – if Caesar can just about phone it in on the way to the forum, a bad Brutus derails the whole thing. There’s no danger of that here as Dion Johnstone shows once again why he’s one of Canada’s most treasured Shakespearean actors. A thin but adaptable cast splits up the varied ensemble of the power players’ pawns and victims to keep the show ticking. Among these roles, Walter Borden stands out as a soothsayer that would strike terror into the hearts of anyone without Caesar’s invincible self-assurance.

It’s easy for a director to make a lazy gesture at current events with a role like Caesar and thereby take a stance that isn’t supported by the text. Chris Abraham explicitly avoids doing that – his director’s note is refreshing in that regard, noting that Shakespeare is “interested in the entire eco-system, including, and perhaps most importantly, the unseen citizens of Rome”. This cast brings that eco-system to life – in all its complexities.

The night ends with an epilogue by Zach Russell that bookends his contribution to the start of the play. The content here is fine but more suited to an original work modelled on Caesar than as an afterthought tacked on to the play itself – the language and tone are a jarring contrast with the finality of the play’s usual ending. Though this is the note we leave the play and review on, it doesn’t detract much from a memorable production that can happily compare itself to any of the famous Caesars.