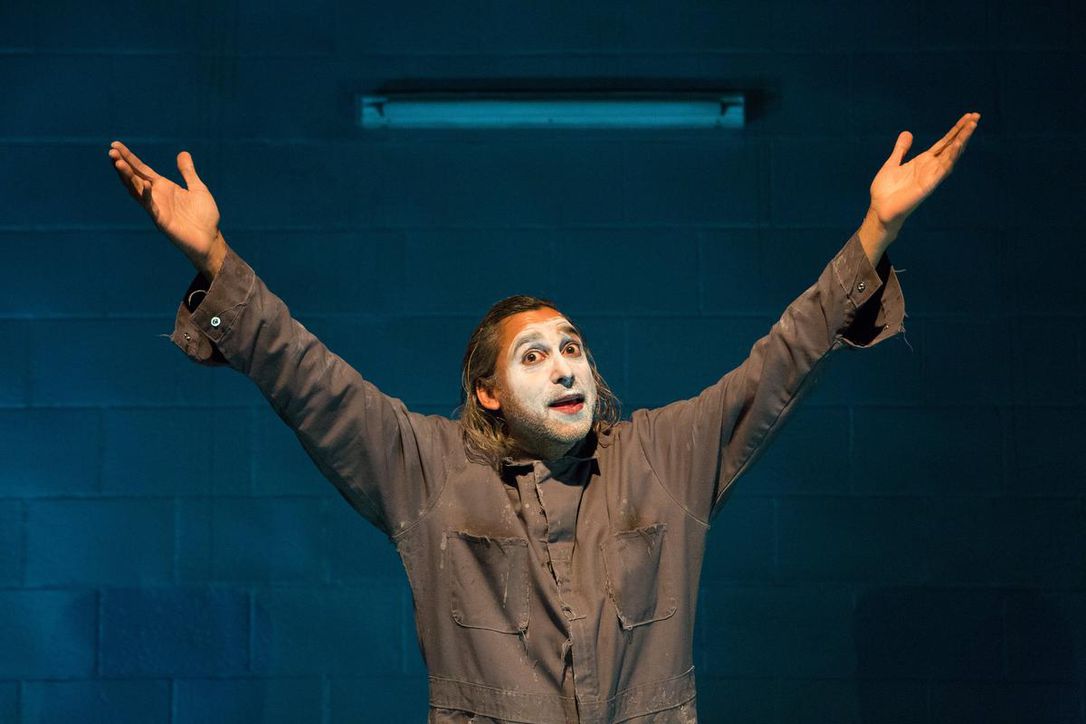 Clowning is an art. A wise woman who has spent most of her adult life performing as a both a theatre and a circus clown once told me that clowning is an impossible art to perfect because a true clown must be able to balance wearing a variety of hats all while acting the fool. A clown must be courageous yet vulnerable. A clown must be confident and quick, but not allow their ego to get in the way of their work.

Under the direction of Richard Rose, Anand Rajaram’s performance in Anosh Irani’s one-man play Buffoon is some truly wonderful theatrical clowning. As Felix, a boy born into the circus life and who eventually finds his place under the big top as a clown, Rajaram embraces the qualities of the fool in order to truly inhabit his character. His portrayal of Felix is vulnerable and courageous from the moment he unceremoniously takes to the stage. He remains on stage alone for the full 90-minute production surrounded by gray cinder block walls, sweating under the glare of a bright spotlight, nothing to keep him company but a single steel chair, the audience taking on the role of whomever he is speaking to throughout the show.

Wearing only white pancake make-up and a dirty gray boilersuit, hair stringy and disheveled, Felix weaves for us the story of his life. Like many stories told through clowning, it’s a tragic tale about his search for acceptance and feelings of abandonment, his need for love and his brushes with death. Rajaram portrayal of Felix is open and honest. Having grown up mostly alone and without guidance, Felix is a deeply flawed person. He often struggles to process his feelings and emotions about himself and towards those around him. All of this is projected through Rajaram’s mournful eyes, his frenetic actions, his desperate words, and Irani’s heart-wrenching story-telling.

Irani’s story seeks out and often finds the comedy in the tragedy of Felix’s life though. These bursts of humour exemplify how the clown can find foolishness in even the saddest of experiences. The audience laughs along with Felix’s silly tales of his tub birth, growing up around the big top with momma and poppa, the distant Flying Olga and the distracted Amazing Frank. We experience Felix’s first love, the seamstress’ daughter Aja, with him and our heart breaks with his when she goes off with the tent-maker’s son.

The physical comedy that is interspersed throughout the show, although sparingly, is well choreographed and executed. I certainly would have enjoyed seeing more of this aspect of the performance. At first I thought physicality was underutilized, but as the story culminated I better understood why the choice was made to have Felix remain in a somewhat fixed state on the stage. As for the last act, it is full of unexpected and dark surprises that tie up the loose ends of Felix’s story even while he continues to unravel before our eyes.

So folks, step right up and buy a ticket for Buffoon while the circus is still in town. Anand Rajaram’s performance is outstanding and Anosh Irani’s story will leave you with a feeling of emotional whiplash in the best way possible. Buffoon plays at the Extraspace at the Tarragon Theatre from November 20, 2019 to December 15, 2019.