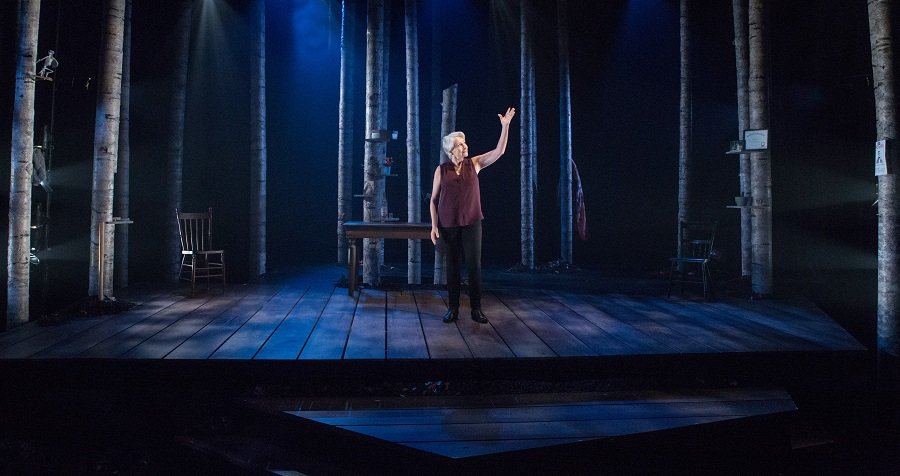 Tarragon Theatre has set up a wonderfully witchy opening to its autumn season. Leaves are turning, the air is cooling, and the fall season of theatre has begun. Onstage from September 17-October 27, Yaga is the perfect play to get those autumnal feelings flowing. We’re talking witches, murder, and powerful females, not pumpkin spice. Written by Kat Sandler, the play is an homage to the legendary character Baba Yaga in all of her multi-faceted embodiments. A complex character throughout storytelling, Baba Yaga is everything from wise-woman to witch. Sandler weaves the tale of a modern Yaga with shining creativity through a small-town murder mystery. There are some aspects of this genre that don’t lend themselves particularly to the stage, but the feeling, drive, and social commentary sprinkled throughout the play make for a marvelous evening of intrigue and spook.

Yaga’s opening scenes rush through introductions with a large group of characters played by a small cast. While there are times when multi-casting is clear and effective, the boundary lines in this case between the characters seem to blur and leave the audience slightly confused. However, the pacing improves dramatically as the play settles into its main narrative. The small cast are all lovely, but Seana McKenna stands alone. She absolutely makes the show, gluing the whole together, and demonstrating a myriad of skill in roles with varied demands. She is stunning, magnificent, and I would be happy to watch her perform the entire evening solo. McKenna is the true embodiment of Baba Yaga as introduced in the play: witchy, enchanting, strong, independent, alluring, and powerful. The most interesting part of this play, for me, is the concept, rolled into one with McKenna’s various characters. Sandler writes in her introduction that Yaga is an exploration of the role of the powerful woman in society; how any strong and individualistic woman can be negatively labeled to instill fear or hate in the masses. I adored watching the interplay between strong women of the present and strong women of legend.

Regardless of some pacing problems in the beginning and the play running on the long end, I enjoyed Yaga. I loved the set, concept, and theme, and commend Kat Sandler’s writing and creativity. Yaga is both inherently modern and ageless. The struggle to make one’s way as a woman on her own has always been a challenge. Sandler shows us both the power and the vulnerability in such action. Yaga is a wonderful way to head into our darker days and contemplate the influence of women, witches, and feminine strength.