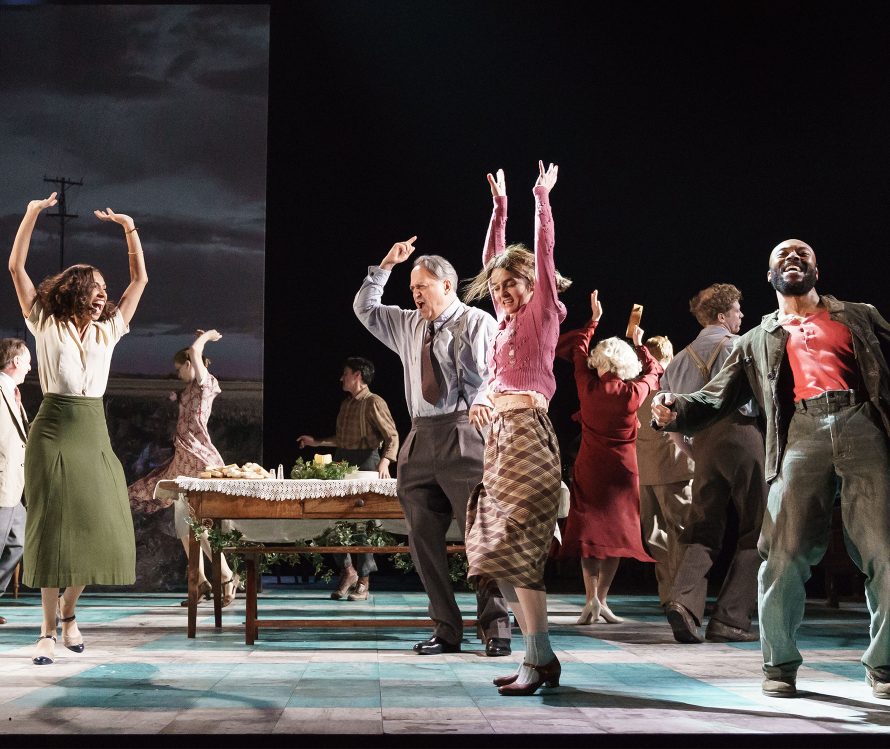 Set in Duluth, Minnesota in winter 1934, Girl from the North Country is not a typical musical. Understated and thoughtful, this Depression-era drama does not conform to what people might expect from a West End and soon to be Broadway hit. Instead of attempting to blow you away, the production quietly pulls at your heart strings. The result is beautiful.

With an ensemble cast, Girl from the North Country is set at a guest house with various people passing through. Around the height of the Depression, all of the characters in the story are drifting. Though rarely alone on stage, and in spite of several moments of joy which lift the mood, we feel their intense loneliness and lack of hope throughout.

The plot focuses on the Laine family. The father Nick Laine, played by Donald Sage Mackay, runs the guest house which is soon to be foreclosed by the bank. His wife, Elizabeth, played by Olivier-award-winner Katie Brayben, has a severe mental illness and needs constant care. Meanwhile his son Gene (Colin Bates), an unemployed writer, and adopted African American daughter, Marianne (Gloria Obianyo), who is pregnant, try to plan their next steps.

In recent years, many artists have shoehorned their songs into musical theatre format to try their hand at creating the next jukebox hit. Fortunately, the process in creating Girl from the North Country was nothing like that. Conor McPherson, the writer and director, transplanted Bob Dylan’s songs into a completely new context, and with full creative control. With Simon Hale’s stunning yet simple orchestrations, instead of driving the story the songs complement it.

Without a doubt, Brayben is the biggest highlight of the show. At various points through the play, Elizabeth comes out from under the cloud of her mental illness, providing both moments of comedy and profound clarity. Brayben’s rendition of Like a Rolling Stone is absolutely phenomenal, when her character bursts out with expression after being subdued for a number of scenes.

The cast is packed with beautiful voices, but Gloria Obianyo also deserves special mention, whose rich voice resonates incredibly well with Dylan’s songs, as does Shaq Taylor who plays the boxer and convict Joe Scott, staying at the guest house on his way to Chicago.

That being said, many of the most special points in the music are when the ensemble provides a warm glow of harmonies behind the soloists. They are accompanied by a small orchestra using 1930s instruments, directed by Ian Ross, and help to build a vibrant yet delicate sound. This is complemented by the ensemble’s natural, energetic movement, by Lucy Hind, which keeps the production moving effectively.

As the musical progresses, we get to know a number of different characters who visit the guest house, including an untrustworthy bible seller Reverend Marlowe (Finbar Lynch), and Dr Walker (Ferdy Roberts) who also provides the occasional narration.

Having so many characters does entail a trade-off. Though the songs help the audience build a connection with them, as the plot progresses you do not feel quite the level of anguish that you would with a few lead roles.

For this musical, though, that compromise probably makes sense. After all, the characters themselves only get to know each other fleetingly. At one place in time, these transient people briefly come into contact as they try to rebuild lives shattered by the Depression. Knowing the complete story somehow wouldn’t feel right.