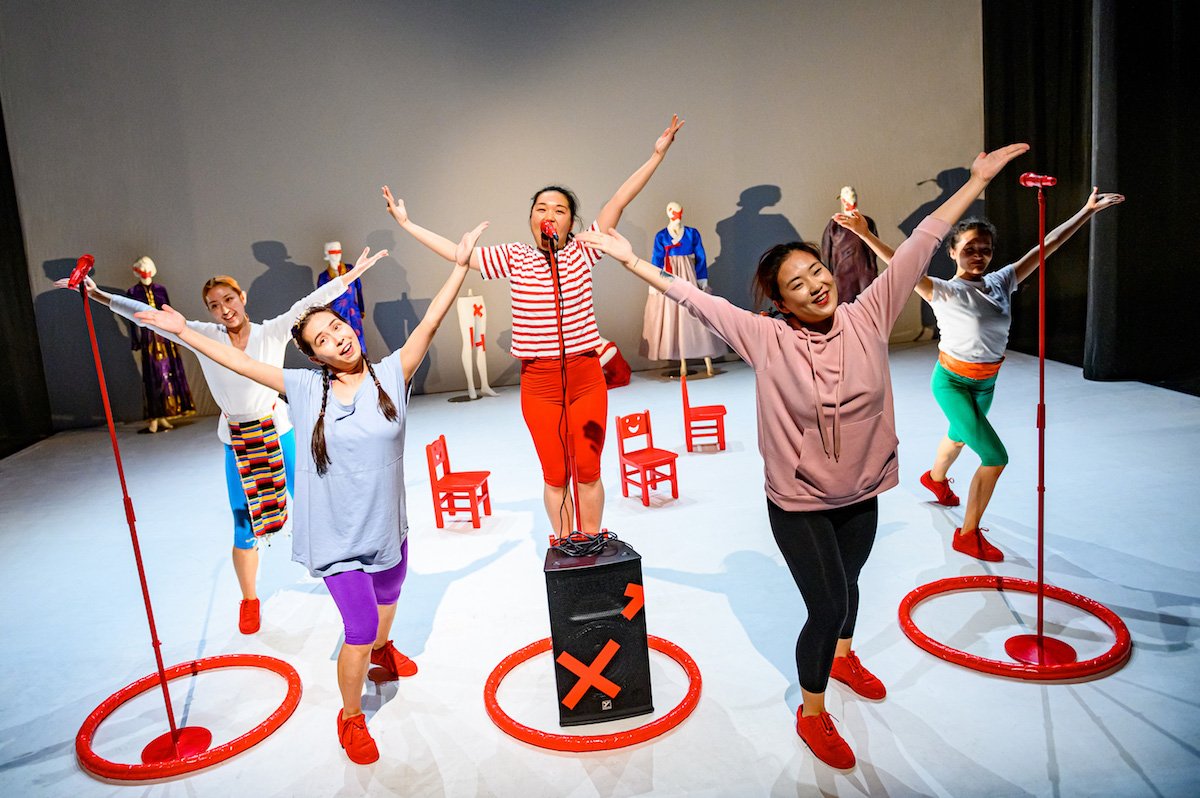 Minorities has a provocative set, mannequins placed across the back of the stage are costumed in various traditional Chinese clothing, with red duct tape placed across eyes, mouths and torsos. The backdrop is a large red screen with a projection of line drawn figures filling out a crudely constructed crowd featuring Chairman Mao in the centre. Along the front of the stage are five red painted microphones each accompanied by a red hoop and child sized red painted chair. A high pitched and aurally uncomfortable four bar melody is playing on repeat.

Slowly the line drawn backdrop becomes animated with facial features filled in and moving mouths while the whiney melody picks up a beat, the space is transformed aesthetically to a late 90’s Rammstein Du Hast-esq rockshow with a neon palette and headbanger energy. Five women emerge from the audience, standing up to dance energetically in the aisles. Not necessarily an original concept, but is done with a playful sense of humour and establishes thematically the notion of individuals being assimilated within a crowd.

Over the course of the production each dancer introduces themselves and their cultural background via a short folk dance demonstration, a shared family memory, and costume. The feeling of much of the show eschews the earlier party energy in place of a blandly apolitical survey class on performative Chinese minority culture. While the conceit of the piece is deeply political, much of the presentation is suggestive of multicultural propaganda.

At times I struggled to follow the narrative and read through the double meanings of what was being presented. Midway through the show the dancers dress themselves in the cultural folk costumes that had been displayed on the mannequins. The lead narrator of the production, Lou Hio Mei who is from Macao and earlier in her introduction recalled her struggle at being identified visually as Han (the ethnic group making up over 90% of China) does not have a cultural garb to change into, rather she begins to undress revealing two red taped exes across her chest. The rest of the cast angrily try to force her back into her shirt but she is victorious and remains unclothed for a large part of the second half of the piece. There is also a language lesson with an audience member invited onstage to participate. And the finale featuring operatic singer Huang Ping who sings the refrain “Love China” over and over while the dancers perform in a circle. It was not clear to me at the time or upon further reflection what the full meaning of these narrative points communicated. I suspect that the intent was a bit cheeky, but I was not able to piece it all together.

Choreographer Yang Zhen with his work Minorities is pulling back the curtain on Chinese multiculturalism and cultural erasure. He notes that his work, “explores the constant conflict between social prejudice and individual consciousness” while interrogating the “narrative of a harmonious One China” through the personal stories and folk costumes (dance and fashion) of his cast of Chinese ethnic-minority dancers”; Lou Hio Mei (Macao), Ma Xiao Ling (Chinese Korean), Aodonggaowa (Mongolian), Gan Luyangzi (Tibetan), Guzhanuer Yusufu (Uyghur).

The One China policy asserts that there is only one sovereign state under the name China, while refuting Taiwanese independence. It is also significant to note that this work is touring internationally with a backdrop of media coverage on Hong Kong’s ongoing and increasingly violent anti-government protests (the anti-extradition law amendment bill movement), and to a lesser degree coverage of (alleged) Uyghur genocide.