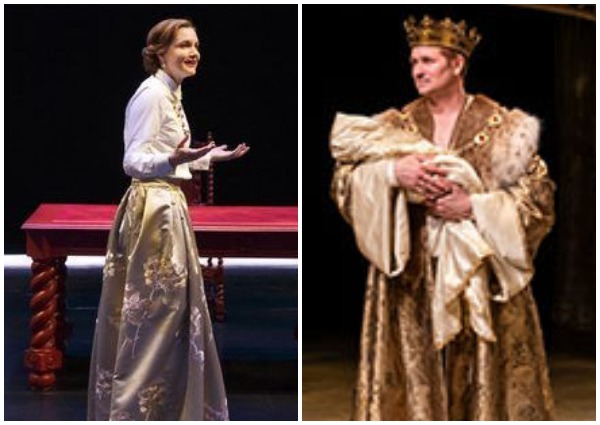 Shakespeare earned the right to phone it in. It was clear that even his less daring and promising works would be feted beyond their merits – anything bearing his name would get the benefit of the doubt when the same script by a lesser or less famous playwright would be passed over. More generously, any writer that prolific will have as many misses as hits. In the Bard’s canon Henry VIII is one of its titular character’s minor lords, basking in the glow of a beloved leader and pleading for scraps of attention. Seldom studied or staged, the play returns to Stratford after fifteen years for just the fourth time. Unusually, it features here as an appetizer for a true highlight of the festival’s season – Kate Hennig’s Mother’s Daughter.

The life of Henry VIII should provide ample material for a dramatist – a legendary ruler, overcome by his fatal flaws, whose personality and legacy are still the subject of vigorous debate among scholars. Contemporary accounts hail him as a world-historical figure uniquely capable of guiding England through turbulent times – and then as a lethal narcissist whose tyranny is far too all-encompassing to be called petty. You expect a playwright as talented as whichever Shakespeare(s) you believe in to synthesize these Henries into a complex and compelling character; instead, the role seems muddled and aimless. Jonathan Goad’s Henry is methodical but fails to repack these contradictions. Cardinal Wolsey, a figure of tremendous importance, comes across in the text as unremarkable rather than the treacherous whisperer that Shakespeare stitched out of whole cloth so well with Iago. Rod Beattie’s performance works for a cardinal but not for this Cardinal; it’s hard to imagine his Wolsey manipulating his way up the royal court and plotting secret schemes with foreign powers. Maybe that makes sense in a world defined by titles – like the play itself, the content matters less than the name attached to it.

The depth of many Shakespearean characters opens doors for creative directors: a reimagining of a central figure can be the cornerstone of an entire production. Historical works make this task easier if those real-life figures were kind enough to be interesting. For the likes of Henry VIII, simply threading the helix of good and evil in a new way is enough to bring something new. The play ends at the christening of Elizabeth and the dawn of a joyful day for England (more on that later) many years before Henry’s death. This means that we never get to see the late Henry – feared and reviled, tearing through a pack of wives. Goad’s Henry is the master of all he surveys, the hero of hagiographies and family histories, and is good enough at that. We see few sinister omens of what’s to come – the anger, entitlement, and lust that mark the Henry VIII children learn about in schools – and the script is worse off for it. In one sense, a whitewashed Henry is a radical Henry – framing him as a hero is a brave choice but a bold one. However, the figure of Henry looms so large that so many safe portrayals are available as a default. It would take the Shakespeare that we know from his more iconic work to grapple with such a loud enigma.

A very different dynamic is at work in Mother’s Daughter, the final instalment in a trilogy of plays focusing on the women left behind in the wreckage of Henry VIII’s reign – Katherine Parr, the sole survivor of Henry’s wedding altar who did more to pave the way for future queens than anyone remembers; and the young Elizabeth I, implicated in a coup to seize the throne that’s not yet hers. If Henry is remembered with a breadth that leads to depth, there’s an unfortunate simplicity to how Mary Tudor is remembered: hardly at all; as a murderous interlude between her father and half-sister; or as Mary, Queen of Scots. The “Bloody Mary” of popular history is easy to write into a work as a caricature (though surely not as a main character!); a focus on her – especially as a layered person – would be a radical choice in itself. Hennig’s goal here is not to rehabilitate Mary or to push some particular stance on her but to let her “appear”; her Mary, in the words of director Alan Dilworth, “dramatizes the vulnerable beating heart of a leader, without fog, romance, sentimentality, or hate”.The result is a work that explains Mary without excusing her – that makes us wonder how any of us would cope with the crucible she was trapped in and which other figures would seem more human to us if their backgrounds were allowed to unfold.

After the death of King Edward VI, Lady Jane Grey is in line to inherit the crown. After Mary successfully claims the throne for herself and imprisons the young heiress, both women wrestle with the implications of the choice they know Mary must make: let Jane live and Mary’s enemies rally behind her, or sentence her – and her own conscience – to death. Mary faces the same conundrum with her young half-sister – crowned as Queen Elizabeth I in the climax of Henry VIII and known in this alternate universe as Bess – who is gathering more and more support as her rival as religious conflict tears the country apart. The voice urging bloody murder inside her head is the memory of her mother Catherine, played with a terrifying ruthlessness by Irene Poole – who also stars as the disgraced Queen Catherine cast aside in and by Henry VIII for Bess’ mother Anne Boleyn. This continuity between the two plays is not just a clever trick: it’s a real exhibition for Poole, whose performance is easily the best part of Henry VIII and a highlight of Mother’s Daughter. Her composed desperation in the face of her betrayal and exile by Henry is masterful, as is her formidable ruthlessness as she seeks revenge vicariously through her daughter.

Shannon Taylor is excellent throughout as Mary, conveying the new queen’s inner turmoil with a refreshing relatability (it helps that the dialogue is modern and colloquial – too much so, sometimes – after the Tudor formalities of Henry VIII). She sparkles in her showdowns with Bess and Jane, played by Jessica Hill and Andrea Rankin, which are so much easier to invest in than the emotionless politicking of Henry’s court. Even the minor parts work well: Maria Vacratsis is delightful as Susan, who drags Mary down to earth with a rather British forthrightness.

The set, in its minimalism, does a fine job of tying the room together. The borders of the stage are sharply delineated by lighting strips that pulse red as the main lights dim upon Catherine’s entrance, like a tripped alarm in a heist movie, instantly provoking an unearthly discomfort. The props and costumes are appropriate but unobtrusive as befits the tone of the play – while Henry and his chums revel in the trappings of power, the women of Mother’s Daughter get down to business.

This Henry VIII is entirely competent but only the Shakespeare obsessives will leave truly satisfied; the more casual patron is unlikely to feel they just discovered an obscure gem. It’s more palatable as a lead-in to Mother’s Daughter, which delivers fully on an intriguing and challenging premise. Fans of Hennig’s play will wish they could see the real prequels and be thrilled they saw this one.