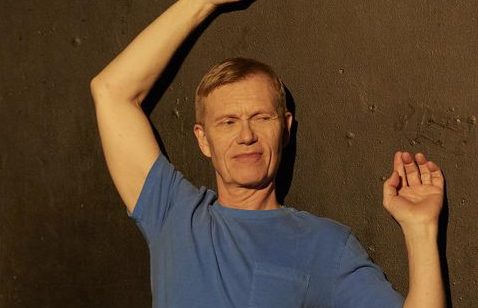 Out is Back In

In the play OUT, first produced at the 2016 Toronto Fringe Festival, writer-performer Greg Campbell takes us on a personal walk in 1977 Montreal, channelling his autobiography through Glen as he slowly comes out, amidst the unfolding gay liberation movements across North America. It’s captivating to see a story rooted in a time when “gay” had not yet become the much more inclusive LGBTQ+, and “queer” was still vulgar. Along with his cohort, he is fighting for basic rights, even to simply be heard.

This is Campbell’s first play, though his chops aided from a career as actor-director are evident. His use of every single corner – literally – in the cabaret space including steps and doors offstage, and his command of the text elevate this rather simple coming out story to great heights. In fact, he interprets several dozen characters including family, friends and, of course, lovers with the use of only one set piece: a chair. Campbell relies heavily on inflection and accents, with minimal physical transformation which may have helped us lean in and relate to some of these characters a bit more.

OUT consists of an array of happy, funny, reflective and sad moments, often performed successfully at lightning speed. I imagine director Clinton Walker has played a part and succeeded at helping to give life to each beat of the text, indispensable with this type of show where one individual must capture our attention for over an hour. Design-wise, Steven Lafond manages to delicately score the background of several key scenes including the music and buzz at Pride and in the Limelight disco, allowing Campbell to smoothly seize the moment time after time with his playful singing and quirky dance moves.

Some of the most relatable and memorable scenes take place in New York. After a long bus ride with friends Mario and Dmitri, the latter demands a stop at a popular gay movie house. They are shocked at the so-called “hedonism” taking place inside, and Glen blames Dmitri for the choice. Then, Glen meets an older model-like man whom he spends a romantic evening with and deems special, only to spot the Adonis with another guy at the Pride Parade later that same day.

It’s a pivotal moment when Glen decides to live his life “out” and “proud”, no longer holding back. This leads to some heavy times with his family, in particular his strict Irish father who happens to be an alcoholic. And we can only hope to forget the satirical sing-along with real-life Save Our Children campaigner and ant-gay crusader Anita Bryant who attempts to teach the audience Kill A Queer For Christ (actually composed by Campbell) whose lines include “If his teacher’s not a fruit, your son’s head won’t be messed!” But it’s the final scene, perhaps, that strikes us with the most hope. It’s something we still need to be reminded of: the possibility of understanding and even tenderness between a parent and their grown-up child; it’s power to heal many great differences.

OUT runs until May 5th at Buddies in Bad Times Theatre.