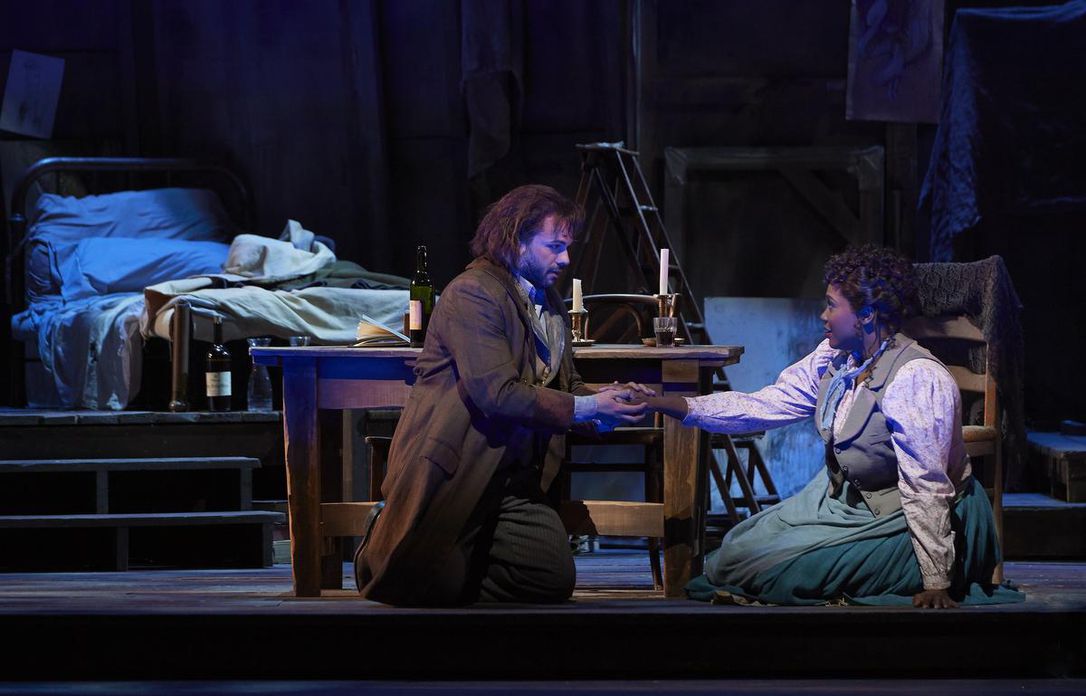 Several cast members made their mainstage Canadian Opera Company debut for the revival of La Bohème, and it sure was worth watching if only to hear the powerful arias which the players are able to belt whether standing, lying or sitting.

Being a huge fan of Jonathan Larson’s Broadway musical Rent, loosely based on the opera, I was particularly excited to dive into some of its source material. In both shows several artistic friends, down on their luck, occupy a studio together. Written and set a century earlier, in the 1890s, there are no filmmakers in Giacomo Puccini’s tragedy, libretto by Giuseppe Giacosa and Luigi Illica. Writer Rodolfo (Atalla Ayab) woos us with his romantic charm and artistic passion. But ultimately its Mimí (Angel Blue) who he seduces, a seamstress who shows up at the flat in need of a light for her candle (reminding us of Larson’s “Light my Candle”). Blue together with Ayab exude some of the strongest romantic chemistry I have seen on stage. Another noteworthy performance is the playful and vibrant Musetta (Andriana Chuchman) who resounds even when singing quietly. She is appropriately costumed (David Farley) in a bright pink dress as she practices restraint for her ex Marcello (Lucas Meachem) with futility, despite knowing – like Mimí – that the patronage of a rich lover can make life much less difficult.

What’s most interesting to me is how each aspect of the production reflects the artistry of the characters. David Farley’s revolving design, in fact, compliments the themes and the action with refined excellence. And I enjoyed seeing the flawless transitions from the inside to the outside world. The set with its paintings strung from every corner, and on the facades of the buildings, allude to a creative Marcello who is often seen with brush in hand. Musician Schaunard (Phillip Addis) comes to life through the live orchestra itself. Perhaps, the social issues echo the thoughts of philosopher Colline (Brandon Cedel). Of course, the love ballads are the manifestation of Rodolfo’s own poetry. It’s no doubt conductor Paolo Carignani has added texture to much of Puccini’s complex score, pulling the best out of each moment, sometimes so much so that the music upstages the vocals.

In a dreary world where the talented and the loved still face political, emotional, and social poverty, and women test out their real value away from the shadow of men, the piece is a cry for change that still rings true today. The theme of “hope” is sung many times over and we easily buy into it, especially as these friends do come together to take care of each other. The last act seems to drag on, perhaps, because we already know the fate of poor Mimí and there have not been any new stakes for quite some time by then. None the less, the final moments – as they look on in shock and eventually extend comfort to a mourning Rodolfo – did bring tears to many eyes including my own.

I believe this production’s timeless themes, recognizable songs, and narrative simplicity make it a great opera to take connoisseurs and novice’s alike to see. Please note, some of the cast as well as the conductor will change for later performances, with La Bohème running until May 22nd.