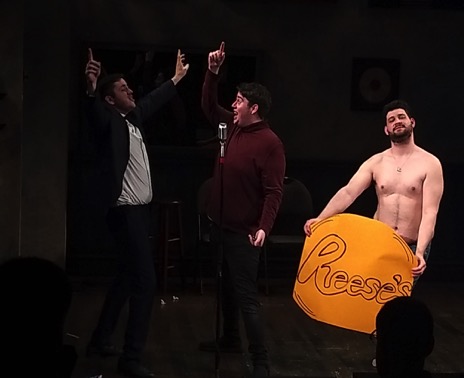 One Night Only: Crooning Comics

It can be surprisingly hard to find a good old cabaret act done well. Toronto cabaret veterans Thomas and Kevin Finn and Kevin Godfrey, dropped in at the Lower Ossington Theatre to remind us what that looks like alongside Julia Carrer, who was reliably impressive in the musical numbers dotted throughout the evening.

The comedic sketches kept the audience cheerfully confused as they veered from the absurd to the surreal. There were a few misses – perhaps inevitably in a two hour show – but each sketch was snappy enough that a new scene was set whenever it began to lull. Audience participation was reassuringly hitchless.

The Finns were only in town for one night – and no two audiences see the ‘same’ show – but I would gladly sign up to see any of these performers again and am keen to see Carrer in her more prominent roles in musical theatre.