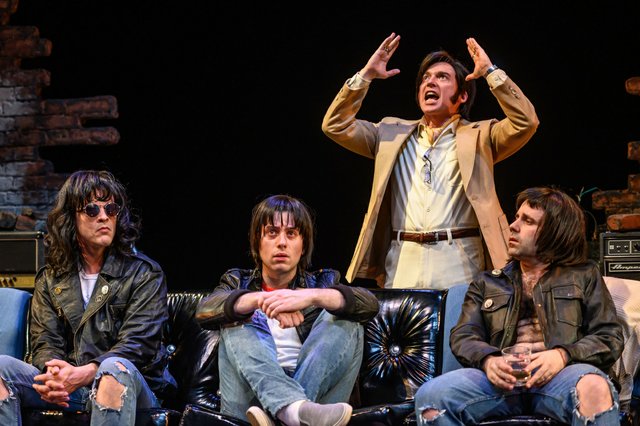 The Ramones Non-Musical: Four Chords and a Gun

In all of the subway posters and other promotional material around the city, the producers of Four Chords and a Gun have placed this description front and centre: “A Play Followed By A Concert.” Which seems like a very odd presentation format, until you read the smaller disclaimer on the front of the program: “This play is not endorsed by Phil Spector or the Ramones. It is a fictionalized account inspired by a true-life event.”

In other words, the producers may be able to dress the actors up as these real (and larger than) life people, but they don’t have permission for them to perform any of the music the artists released. And the cover bands who play the show’s musical encore don’t look anything like the Ramones either, for likely the same reason.

So Four Chords is an unauthorized biographical jukebox musical, that can’t actually be a musical, for legal reasons. And, considering the sterling cast (more on them later), that’s the first disappointing realization, because said cast includes award-winning musicians and performers, who’ve starred in major musicals in their careers. No slight intended to the double cast cover bands that competently rip through The Ramones‘ hits after the curtain call, but it’s akin to having a group of NHL players show up to an exhibition, do some drills, and then sit on the bench while journeyman players take the ice for the game.

For those unfamiliar with the infamous incident at the centre of the play, the NYC-based Ramones had a cult following in the 70’s based on their early recordings and marathon touring schedule, but by 1979, they wanted more. Legendary producer Phil Spector (played here by Ron Pederson) offered them the chance to record with him and propel the band to possible superstardom, maybe even the level of commercial success enjoyed by the band Kiss, who right-wing guitarist Johnny (a brooding Cyrus Lane) admired for their business acumen. What the band may or may not have known at the time they agreed to the proposition was that Spector hadn’t worked with bands in years due to his abusive working practices; they almost certainly didn’t know he habitually carried a pistol on his person, a pistol that was likely used in 2003 by Spector in the murder of Lana Clarkson at his home.

Playwright John Ross Bowie, clearly a fan of the band, uses the pivotal event (Spector pulling a pistol on the band, on at least one occasion) as a lynchpin for an in-depth look at the four musician’s lives at the height of their recording careers, and when a number of key life events happened; the death of Johnny’s father, his beginning a relationship with his future wife, and the painfully shy Joey (Justin Goodhand) losing his longtime girlfriend Linda (an effervescent Vanessa Smythe). It’s also a snap shot of the addictions suffered by binge drinking drummer Marky (James Smith) and the any-drug-will-do DeeDee (Paolo Santalucia).

That cast is the primary reason to see this show, unless you’re a Ramones diehard willing to sit through the disjointed play solely for the concert after. There’s some juicy dramatic material from scene to scene for the actors to chew on. Santalucia’s DeeDee is pathetically optimistic about getting healthy while in California (it’s not really a spoiler to say he doesn’t), and is also lying to himself and his bandmates about his sexual orientation; it’s a sensitive and moving turn by the actor. Smythe’s Linda, despite limited stage time, gets the chance to be both a caring partner to the OCD sufferer Joey, and stand up for herself when she feels taken advantage of. Pederson has much fun with Spector’s eccentricity and sartorial choices; we see Spector’s hair trigger temper, but it’s a surprisingly sympathetic portrait of the man now spending life in prison for murder.

But all their good work in specific scenes doesn’t add up to a smoothly rendered story; again, because the format of the jukebox musical, deprived of any live music, doesn’t have the Ramones’ punk power to sustain it. With our appreciation for their body of work dulled by the music and theatrical separation, we’re watching five characters (with a sixth mostly on the sidelines) mope around a tastefully appointed but dreary mansion, and occasionally clash with each other. (Here’s a good place to note that the show looks superb, from the costumes and wigs by Ming Wong and Sharon Ryman respectively, to the set designed and lit by Nick Blais.)

Director Richard Ouzounian, a long time Toronto Star theatre critic (he retired in 2017) and vociferous proponent of the well staged (and funded) musical, clearly hoped the separation of the musical’s elements would still work in isolation; ditto for playwright Bowie. But a show that might have been electrifying propelled by the music of the Ramones is at best intriguing with the music as an end note.