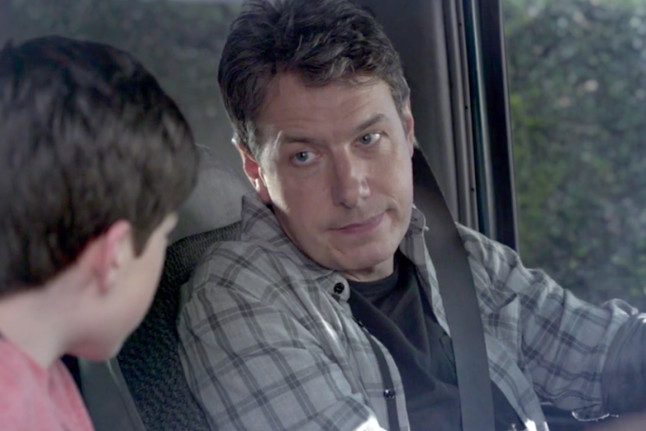 John Ross Bowie’s Jimmy is, for my money, the best dad on TV. He’s nominated for Outstanding Supporting Actor in a Comedy for his work on ABC’s Speechless, a family comedy that’s as clever as it is clear-eyed in its honest portrayal of disability. Starring opposite Minnie Driver as the father of three trying to hold it together, John has quickly become one of my favourite performers on TV.

What was your favourite TV show growing up?
I watched a LOT of TV growing up, particularly the great sitcoms of the late 70s/ early 80s. Taxi and WKRP leap to mind, but I was also a huge fan of Bosom Buddies – my one moment of longterm thinking was being an early fan of Tom Hanks.

You got your start in sketch comedy. Do you feel like that background influences your approach to other work?
If done right, sketch and improv make you pretty analytical about comedy – you think quickly and deeply about what makes a joke funny and what word should be accented to help it across the finish line. Years of work in front of an audience teaches you a lot about what works and what doesn’t.

One of your most famous roles is as lisping villain Barry Kripke on The Big Bang Theory. What have been some of your most memorable experiences in that role?
Where do I start? Through that show I’ve met Adam West (RIP), Levar Burton, Bob Newhart, Laurie Metcalf, Christine Baranskiand countless other great actors.

How did you get involved with Speechless?
I auditioned early on for the role, but I think the network wanted a name – so they just sort of kept me on the hook for a couple of months and when no one was able to do it, I got the job the night before the first table read. Which is fine, by the way – it’s worse when it goes the other way.

Have you gotten the opportunity to speak with many special needs dads either in preparation for or reaction to the show?
I have – I visited an amazing school in the valley called the Chime Charter that mainstreams disabled kids into typical classrooms. It’s pretty incredible talking to those parents, and hearing their stories. They’re all unique, but they’ve all got a particular resilience that is fun and challenging to portray.

Tell us about working with Minnie Driver and the rest of your TV family.
It’s a fun group- everyone’s happy to be there, and Minnie and I get along like an old married couple. There’s a lot of ball-busting, but also a lot of laughing. Our kids hang out.

Jimmy is always giving these great inspiring dad speeches. What’s the best piece of advice he’s given and have you ever stolen some of his dad wisdom to use on your own kids?
The speech that is often cited that I really love is the bulletproof speech, which was from season one and is based on a speech that Scott Silveri’s dad gave him: After what the family has been through, it doesn’t matter what people think. The DiMeos aren’t normal, they’re bulletproof.

Can you tease what’s coming up for the DiMeos?
The season finale is quite the cliffhanger – I can’t give too much away, but we had a real live coyote on set, and we all carried Micah – like, literally – in the season finale.

Do you have a favourite episode so far?
I’m pretty happy with all of them, but I do have a fondness for the really silly ones – our Halloween episodes are a delight, and I like the ones where I get to play guitar.

Do you have a dream project you’d love to work on or someone you’d love to work with?
Tough to say – but as long as I’m being questioned by a Canadian site, I’ll say I’d love to work with Winnipeg’s own Guy Maddin. His movies are just so transporting and funny and moving, and there’s nobody even attempting the stuff he does. Start with Careful or Saddest Music in the World. Very cool stuff

Tell us about the play you’re working on right now and any other projects you’d like to plug.
It’s a production of Neil Simon’s Laughter on the 23rd Floor, which is a sweet piece about his time working for Sid Caesar in the early days of TV. I love the demands of theater, and it feels good to take my time with a part and find new things over a four month rehearsal.