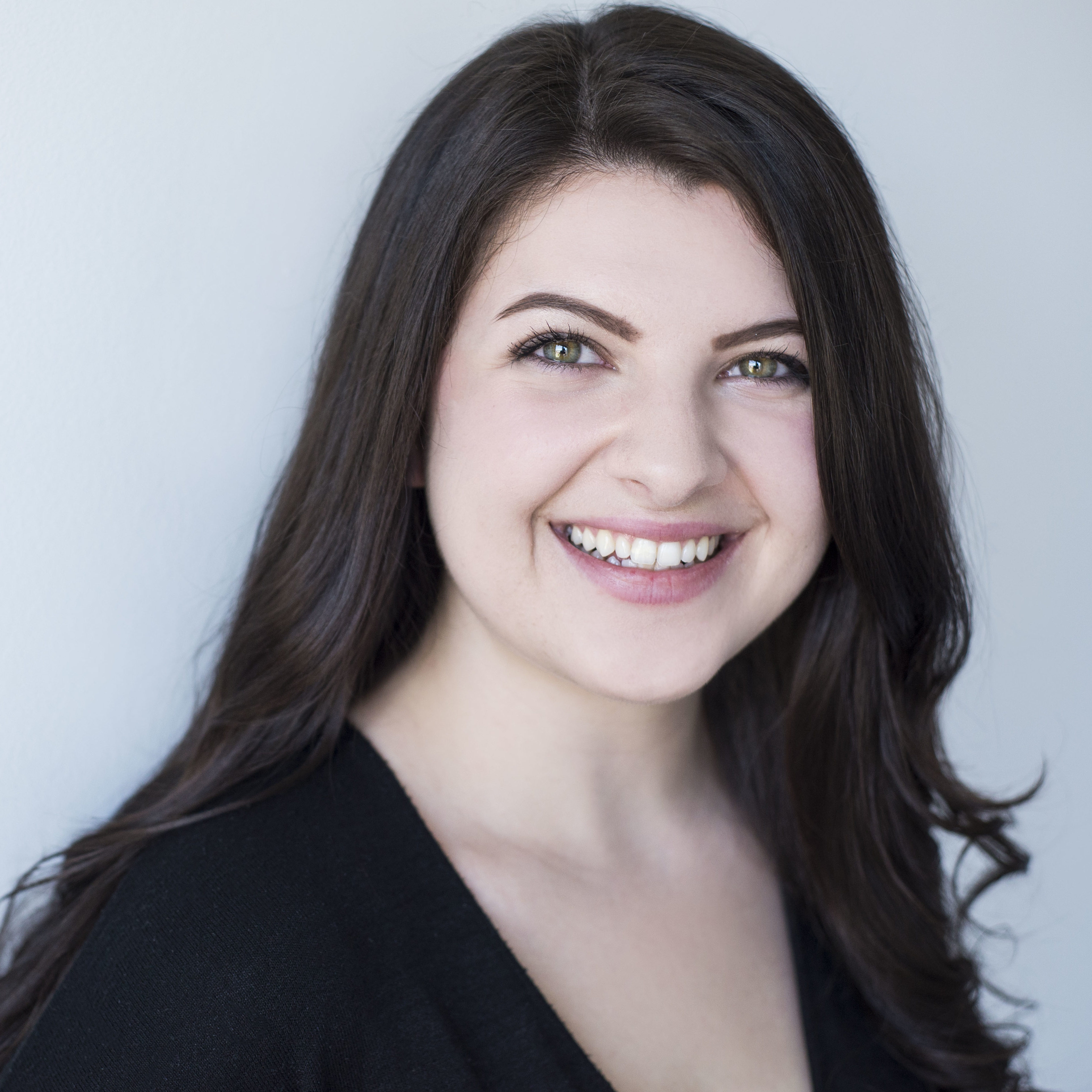 One of the things that’s fun about the Nominee Interview Series is getting to revisit work from the very beginning of last year. It’s been fourteen months since my heart was stolen by Georgia Bennett’s Outstanding Leading Performance in Rumspringa Break!, the Next Stage Festival musical about Amish sisters finding themselves on a big city adventure. Written by some of the fastest rising stars in Canadian Musical Theatre, Rumspringa hasn’t left my head in the year+ since I saw it and I’m counting the days until a bigger budget run is announced. Fingers crossed. (Lucky for me and you and everyone, there’s a pretty great video of the breakout number where you can hear all the crazy beautifulness).

Can you remember your first experience with theatre?
I remember my first experience with theatre being in Grade 4. Every Friday, my class had special afternoon activities and we had to choose something that we thought would interest us. I chose drama because it seemed like the most fun, and I ended up being cast as Miss Clavel in our adorable little production of Madeline. My only line was “Le click!”, which I said a total of 4 different times throughout the course of the show. The next year I played Captain Jack Sparrow in a scene from Pirates of the Caribbean.

When did you start singing?
I took classical singing lessons when I was about 5 years old, but I eventually quit so I could focus on my Barbies without distraction. I started taking singing seriously quite a bit later when I was 15 years old. My mom enrolled me in a “Glee Boot Camp” during Spring Break to give me something to do and since I was such a huge fan of the show, I gladly obliged. After spending the first day learning music, I went home and sang all night long, proclaiming that it was my newfound passion. I’m pretty sure I terrorized my family with my rendition of “Don’t Stop Believing” for a solid month afterwards.

When did you know you wanted to be an actor?
When the crowd laughed after I confidently proclaimed “Le click!” in that production of Madeline, I felt a rush of adrenaline course through my veins. I didn’t pursue it right away, and tried out a few other hobbies before returning to theatre, but I felt a sense of comfort and belonging in that moment that I had never felt before. It was something that felt natural to me, and I loved the sense of security that came with going on stage and playing someone so different from who I was. I was very shy growing up (something I still struggle with as an adult) but on stage, those feelings of insecurity and fear seemed to disappear.

What’s your favourite role you’ve ever performed?
It’s a tie. One of the most precious roles I’ve ever played was Rose in the Theatre Sheridan production of Dogfight in my final year. It was a part that I had always dreamed of playing since the moment I first heard the cast recording, and it resonated so deeply within me that it was almost too good to be true when I got the part. It was a beautiful production and I will treasure it forever because of the way it helped me grow, not only as a performer, but as a woman. Ruth in Rumspringa is, of course, my other favourite role. I’ve been with the show since the first workshop of it, and she is a character so near and dear to my heart. After spending so much time with her, I feel that she’s truly become a part of me.

Do you have a dream role you’d still like to play one day?
My dream role since I first became interested in theatre has always been Elphaba from Wicked. The cast recording was the very first cast recording I ever listened to by my own choosing. I still remember checking out the CD from my local library and copying it to my computer. I think I listened to it almost every day. It’s a part I find so complicated and beautiful in so many ways, and – like Rose – she isn’t a typical ingenue. I feel very passionately about female roles that are different, and at the end of their journey are celebrated because of their individuality and uniqueness.

How did you get involved with Rumspringa Break?
I was cast in the Canadian Music Theatre Project workshop in my final year attending Sheridan College. When we had our initial callbacks for the shows, I remember learning the sheet music for “Old Dirt Road”, and having a feeling in my gut that told me I needed to be a part of this show. I’m so grateful to have been a part of it and to watch it grow. Watching Colleen Dauncey, Akiva Romer-Segal, and Matt Murray change and transform this show from workshop to reading to production has been an incredible gift.

What are some of the rewards and challenges of working on a new musical?
Being a part of Rumspringa has given me the opportunity to originate a role in a brand new musical. Because I’ve been involved since the beginning, I’ve seen Ruth go through many changes, and it’s so exciting to think about where the show started and where it is now. I would say the hardest part about being part of a new musical is when the writers have to cut something that you love about the show. Sometimes there will be things that need to be cut for time’s sake, or clarity, and it can be hard to watch things leave the script.

How collaborative were the writers during the rehearsal process? Did you have much input into the development of Ruth as a character?
All three writers on the show have been very open to everyone who has been part of Rumspringa during the process. They’re always open to our opinions and thoughts, and I’ve always felt very included in their thought processes. A benefit of being with a show while it’s being written is that everything an actor does while interpreting the work for the first time has the potential to influence the way the character will be written in the future. I like to think there’s a tiny sliver of Georgia in how Ruth is today, but I credit all the genius to Matt, Colleen, and Akiva.

Tell us about working with Arinea Hermans as your twin.
Working with Arinea has been incredible. We both went to Sheridan together, but she was a year ahead of me. Honestly, I idolized her a lot when we were in school, and in her 4th year (my 3rd year) we were both cast in Sunday in the Park with George together, and I remember being so thankful that I was going to have the opportunity to get to watch her work when she was cast as Dot. It was a dream come true when we worked together in Rumspringa, and we’re still very close friends. She’s a brilliant performer and a hilarious person, and I’m so glad that Rumspringa brought us even closer together. The two of us, and Joel Cumber, who played Samuel in the show, actually ended up doing a cabaret together shortly after Rumspringa closed. She’s the best!

Did you have a favourite moment in the show?
It’s so hard to pick one moment that I would say is my favourite because I love EVERY MOMENT. But, one that sticks out to me is the song “Grow.” In the song, my character Ruth is singing to a struggling marijuana plant and encouraging it to grow, equating how she feels about herself to this tiny little plant that is too weak to flourish and take up space. I think it’s a really beautiful moment, and I love the idea of these two very different things (a plant and a human girl) living in a shadow and unable to bloom.

What musicals get the most playtime on your iTunes/Spotify/Other Music Playing Setup?
It honestly changes every day. Parade will always have a permanent spot on my list, as will Ragtime, but right now I’ve been listening to John and Jen and the Barbra Streisand A Star is Born pretty consistently.

What are you working on now/next?
I’m currently working on a show with Smile Theatre called Back to B4: A Bingo Bonanza! It was written by two of my amazing classmates from Sheridan, Jared Klein and Alex Panneton, and it’s performed by the three of us. Smile Theatre is a really amazing organization, and I’m so happy to be able to work with them. We’re touring the show around the GTA right now and going to retirement homes, long term care centres, hospitals, community centres, and many other places inhabited by people who are unable to get out to see theatre. Instead, we bring it to them.