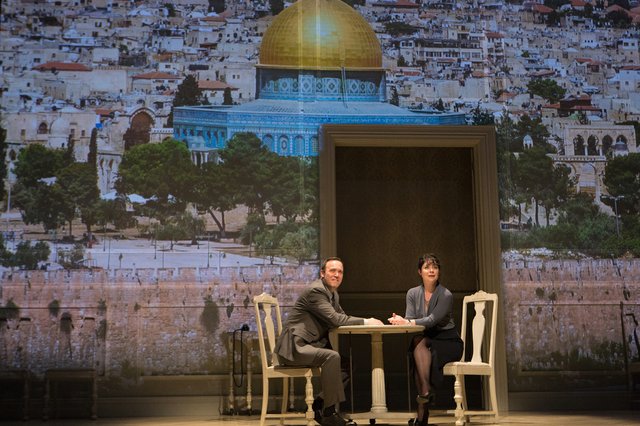 Oslo’s very existence is remarkable. Staging a full-length work about the most incendiary issue in foreign policy is already a major diplomatic achievement. Turning that into an award-winning Broadway hit? The Nobel Peace Prize is awarded for less. It’s no surprise that playwright JT Rogers embraces that challenge, having already brought a theatrical perspective to the Rwandan genocide and the war in Afghanistan.

As new and bloody chapters of the Israel-Palestine conflict unfold, important moments fade from memory. The Oslo Accords are remembered by most – if at all – as a brief lull in the carnage, framed by the iconic Rose Garden handshake between Rabin and Arafat. Oslo highlights the secret work done by a pair of obscure Norwegians, diplomat Mona Juul and her academic husband Terje Rød-Larsen, in a daring gambit to forge a lasting peace away from the prying eyes of the press and politicians.

Oslo is at once an ambitious work of history and necessarily ahistorical. With the official record blank after scandals involving missing documents, the story of the Oslo Accords lives on as a kind of oral history enmeshed in Norway’s national mythos. Oslo brings that story to a global audience but the lack of reliable accounts stops the curious viewer from judging the objectivity of the work. The Norwegian conceit – that they facilitated talks between the parties through quiet professionalism – is more forgivable than the Americans loudly claiming credit but our only awareness of it comes through those Norwegians. It’s taken for granted that they should be neutral; as critics noted when the Oslo Accords unravelled, ignoring a warped power dynamic to stay above the fray is an ideological choice.

The play remains carefully neutral on the larger issues too by staying in this brief snapshot in time. To give the history of such a long and thorny conflict is to give a history, simplistic – especially given the constraints of the medium – and informed by its author’s priorities and politics. To express a stance is to invite criticism from all sides for being too extreme or not extreme enough; the only winning move is not to play, as if the question itself is out of your remit. The focus on the Norwegians offers a dramatic hook for the play and relieves the pressure on Rogers to find more heroes and villains: Blair Williams’ Rød-Larsen is earnest and likable, while blustering boss Johan Jorgen Holst is a fine boogeyman.

The action on stage shows Rød-Larsen’s philosophy of gradualism in practice. Bringing both parties to face-to-face meetings on neutral territory will foster a spirit of compromise, applied to one issue at a time; as the old enemies break bread they will discover they are more alike than either would like to admit and bring more empathy to the table. Initially the contrast in styles between the teams offends the Palestinians, who demand to negotiate with their peers rather than frail academics. As the discussions intensify, Israel fields lawyer Joel Singer and Jonas Chernick’s brilliantly aggravating Uri Savir to win the war of words against Ahmed Qurie and grumpy yet hilarious communist Hassan Asfour, played with an impressive range by Omar Alex Khan. These later negotiations are the least compelling part of the play, perhaps due to this need for neutrality and simplicity. While these men all have distinct personalities, their negotiation style is the same – state your demand, then shout it – and it has to be to avoid portraying one side as more reasonable or invested. The thrill of watching high-stakes drama is lost when you’re trapped watching insufferable men preen and yell at each other (it’s notable that the only two prominent female characters are Juul – brought to life with a kind determination by Marla McLean – and housekeeper Toril Grandal, who wins the hearts of the men with her waffles and the audience with her humour).

Thankfully, this is punctuated by the scenes that make the play tick: the after-hours drinking sessions where serious business is strictly off-limits. As expected, they find that the devil shares their vices; one Palestinian finds his “first Jew” really quite charming. It’s never simple, though: an uneasy tension hangs over the room and, after one mistimed joke sours the whole atmosphere, all other jokes have an added danger. Oslo is remarkably funny, even though the subject matter and the personalities involved force the humour to have an air of the absurd.

As is so often the case, the characters are more interesting than the content. Rogers says that he “want[s] you to not be able to find Israel on the map, and be able to follow and be engaged by this play” and he succeeds; one can leave Oslo with little knowledge of why this conflict is so important and intractable. Shuffle the names of the shouting men, and the men they shout about, and this could be the tale of any peace summit teetering on the edge of collapse. Inevitably, Rogers hears reviewers present this as a larger parable about the need to recognize our shared humanity in the age of Trump and Brexit and who knows what else; it’s about the Middle East but it’s not about the Middle East, you know?

Rogers notes that “the further away that people or environments are from me, the more I find it accessible”: a fine quality as an artist but not a safe one to assume an audience will share. Oslo is accessible at the cost of depth. Viewers who can make peace with that are well rewarded.