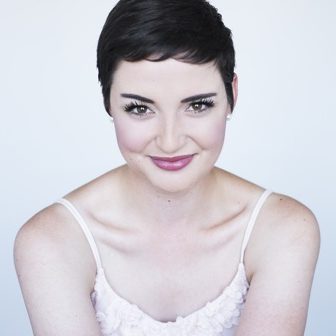 Eliza Martin was born and raised in Toronto, Ontario. She graduated from Cardinal Carter Academy for the Arts with a Drama Specialist before attending the Theatre and Drama Studies program at both University of Toronto and Sheridan College. Eliza is no stranger to a one-woman shows, starting in 2016 with an exploration of Hamlet’s Ophelia in O. Harvey & The Extraordinary debuted in 2017 under the director Neil Silcox, with another run in 2018 for the Toronto Fringe Festival. Recently, we had the pleasure of a chat with Eliza about her Outstanding Solo Performance-nominated turn in Harvey & the Extraordinary, and a little bit about her sources of inspiration.

Can you remember your first experience with theatre?
My first experience in theatre sprung directly from my interest in mime. I have no memory of how the interest came about but I was very intent upon “walking my dog” through “Grown-Up Parties” and playing mime racket sports with my siblings. My parents signed me up for Children’s Arts Theatre School (which I later taught for!) I believe in hopes I would be interested in taking off the face paint and speaking up? I remained at CATS until my teens, when I began at Toronto Youth Theatre and switched into the drama program at Cardinal Carter Academy for the Arts. I was very much a “drama kid” through and through.

When did you know you wanted to be an actor?
I have no memory of the exact moment, but very shortly after my original mime phase ended – around the same age as Mimi in the show!

What’s your favourite role you’ve ever performed?
There’s been so many I’ve adored, but I had a ton of fun playing Hellena in The Rover at Theatre Erindale and Patricia in Hiding Like Elephants as a part of Hangar Theatre’s Wedge Series.

Do you have a dream role you’d still like to play one day?
There’s a list! A long time obsession would be Emily from Our Town and Thomasina from Arcadia.

What are some of the challenges of taking on the combined role of writing, producing, and performing?
I was lucky when it came to producing to have Neil, who filled the majority of the producers role, allowing me to focus more on the writing and performance aspect. I relied very heavily on his lead as well as our incredibly detailed Trello board! When it comes to the transition between writing and performing, we allowed the two roles to exist hand in hand for the majority of the process, which sounds like it could have led to some challenges, but for this piece was the perfect choice. Neil and I had workshopped Harvey the summer before, so happily we had already had the show on its feet and could spend a lot of time exploring new drafts and updates. This particular show is interesting to work on as well, because it always remains in a free flowing place. It relies very heavily on audience participation and moments of improvisation, so in many ways the writer brain never turns off!

Harvey and The Extraordinary is a poignant portrayal of a young person’s attempts to rationalize and cope with loss. Did this have roots in your own experiences?
Like Mimi and many others, I do come from a family which went through a similar experience, which of course influenced my interest in exploring some of the topics in the show. The characters of the Mom and Dad are fictional, as are the relationships between Mimi and her parents, however the character of Mimi is based on a young version of myself, and the character of Dominic is entirely based on my older brother, much to his chagrin! I was also inspired by some of the experiences of the children I work with, both in arts education as well as within the world of early childhood education. I think loss is a topic that can be very difficult to approach and discuss when it comes to children, however hugely important to dig into – both for a young person trying to cope with a loss, as well as for an adult who may be trying to support a young person experiencing loss. It goes without saying that no child will ever have the same experience as another, but I think telling a story about loss and hopefully opening up the conversation is a start!

Tell us about working with director Neil Silcox to bring your vision to life.
I feel really lucky to have been able to work with Neil on this project. Neil has been a long time mentor and friend. I originally met and worked with him when he was the Artistic Director at the Toronto Youth Theatre, over ten years ago now! After I had written my first draft and outline of the show I sent an email to Neil asking if he would consider coming on board. I couldn’t escape the feeling that he would really love some of the humour of the piece and I’m proud to report since coming on board he made it ten times funnier. Neil was a wonderful support for me through the writing process, as this was only my second solo show and really inspired a fun spirit of play in the rehearsal room which given the nature of playing children – really brought the show to life! I’m not positive we ever stopped laughing for more than a few minutes and I’m proud to report we very much shared the belief that there should always be theme related rehearsal snacks.

The character’s emphasis on the differences between being ‘ordinary’, ‘extra ordinary’ and ‘extraordinary’ makes up for a large part of the show. What are some things you try to focus on to make life more ‘extraordinary’?
I love this question! I think the truly extraordinary is found in the seemingly ordinary, and I try to always remember that. I’m a big list maker, so if I can, I take a second list a few of those moments for myself when they come up. Some ordinary yet extraordinary things in my life I reflect on frequently: coffee in the morning, notes from long-distance friends, making pizza with my family on Friday nights, crinkly plastic covers on library books, snowy walks home from coffee shops with my boyfriend, mustard-yellow knits, cuddling my cat against her will, campfires and the people who sit around them, dancing with my roommates in our apartment and the moment in the theatre before the lights go down.

What are you working on now/next?
Right now I’m focused on doing some writing for Children! I have a few different writing projects on the go that I’m excited about. I’m also teaming up again with Rebecca Ballarin after we toured O to NYC this past November, to collaborate on a new TYA show which we’re going to be adapting and creating.

Do you have anything you’d like to add?
We had so much wonderful support on and around this show, and at the very top of the list I want to note that it wouldn’t have been possible without our beyond lovely friends Jeff and Sarah who so generously allowed Mimi her wonderful garage world, as well as our loving and open audiences who so willingly participated! I can’t talk about the show without mentioning it! Thank you!