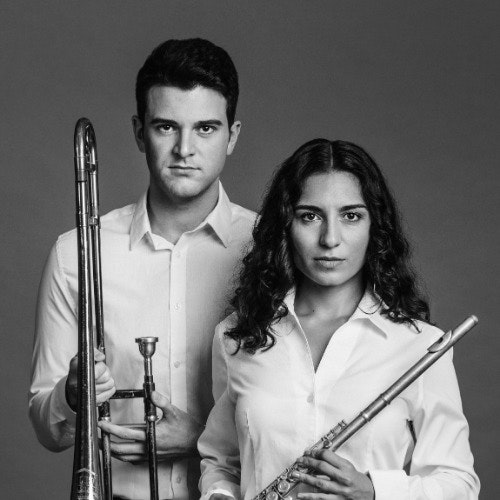 A Bear Awake in Winter
Bullying as a topic in theatre, especially for young people, has been ascendent for the past few years. But it’s rarely examined with such nuance and even-handedness (and humour, even) as in Ali Joy Richardson’s script here.

Richardson’s East coast roots, her in-depth work with young people (she’s the outgoing Artistic Producer of the Paprika Festival), and her focus working with companies like Nightwood Theatre on issues of consent, abuse, and intersectionality all meld together in this play, set about a decade ago in a high school in Dartmouth, Nova Scotia. The events in the play are set in motion by the arrival of two outsiders: Mr. Hill (Andy Trithardt), a music teacher and Toronto transplant who’s moved out East with his husband, and “Flute” (Michaela Di Cesare), a transfer student whose reasons for moving to the school begin to trickle out in rumours. (All of the students are identified in the program by the instrument they play in the band, whose rehearsals are where the ensemble come together.)

In brief vignettes between band practices—a work break behind a fast food restaurant, a late night phone call, a pre-drink in the bushes before a school dance—we learn who these students are, how they react to bullying and discrimination, and can sense that the tensions in the group are building towards a confrontation. But when it happens, it’s shocking and far more morally ambiguous than we’ve come to expect from trite movies of the week.

Richardson’s ear for dialogue is wonderfully tuned and, as director, she coaxes sublime performances from her cast, who range in age and experience (our suspension of disbelief from watching 30-somethings as high schoolers in Riverdale and other TV dramas remains intact). And it’s a hopeful show, too, as some of the characters, shaken by the conflict, start to grope towards reconciliation with those they may have been treated badly by, or treated badly themselves.

Foreign Tongue
WASP Canadian and Type A corporate head hunter Kathy (Victoria Houser) falls into a coma after a stroke, possibly brought on by stress and high blood pressure, and wakes up weeks later with a thick Eastern European accent. Her clients shun her, her estranged family ignore her messages, and the only person who shows her any sympathy is Visnja (Cythnia Ashperger), the Bosnian immigrant who’s cleaning Kathy’s hospital room when she wakes.

Visnja brings a discombobulated Kathy to her ESL class, where she (and we) meet a diverse group of immigrants and refugees from around the world, all of whom are grappling with culture shock, and more significantly, the discrimination Kathy now experiences as a “new” Canadian.

The whole “walk in someone else’s shoes” angle is obvious, and there’s an awkward subplot featuring Kathy implausibly falling for a man (Allie MacDonald) who fetishizes her other-ness. But it’s refreshing to see some fine, funny performers on stage, speaking (and singing) in what may be their native accents. Ashperger in particular is quite funny as the relentlessly chipper Visnja, who dreams of a career on screen. And since the show hinges on Houser’s accents being consistent, it’s a relief that they are, in both dialogue and song (which are controlled by two different parts of the brain, as the show briefly explores).

Daniel Abrahamson and Justin Hickox’s book and lyrics are broad but entertaining, and writer Lola Xenos seems to enjoy subverting some Canadian stereotypes. The appeal of the show seems limited, and it all wraps up in a flag waving number about Canada’s cultural mosaic, but it was fun, all the same.