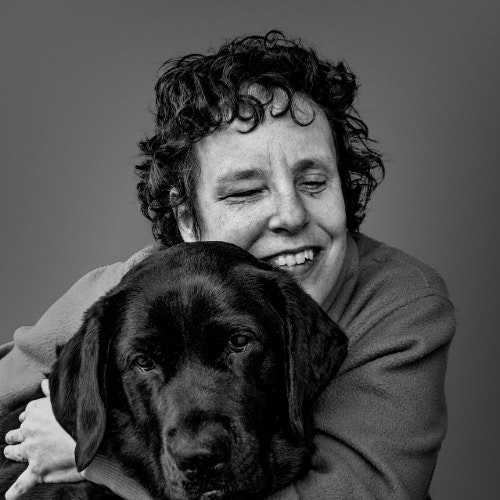 Raising Stanley/Life with Tulia
Raising Stanley/Life with Tulia is a multidisciplinary success of a show that brings together one-woman storytelling, video of original paintings, director narration, recorded artist interviews and music to create a sense of warm, remarkable insight to the world of guide dogs and the people who rely on them. As a storyteller, Kim Kilpatrick has a gentle charm about her that helps to tie the feeling of her emotional journey to her audience. Her struggles, triumphs, sorrows and joys as she comes to appreciate and bond with her guide dogs resonate deeply. The anecdotes she describes weave and flow together into an overall narrative that make each dog feel as uniquely vibrant and engaging in the mind as Kilpatrick is herself. The artworks of guide dogs at work and play by Karen Bailey help to establish a sense of living narrative, of emotional impacts moving enough to inspire that level of creation. The humour of the stories themselves is bright and energizing, helping to smooth out the sadness when a beloved partner passes, or a bond never manages to quite take. The narratives provide an enlightening insight into a world most people probably haven’t thought about beyond the sight of an attentive dog guiding their owner through a busy street.

Ga Ting
How we grieve often brings our deepest, rawest emotions and conceptions to the surface, a notion Ga Ting makes full use of to explore issues of homophobia, preconceptions and the need for guilt, forgiveness and blame. The show tells the story of Matt (Stephen Tracey), a young gay man reaching out to Mai (Loretta Yu) and Hong (Richard Tse), the traditional Chinese parents of his dead lover in the wake of that loss. Their meeting for dinner dredges up a painful past brought to life in flashback sequences that leave their participants often struggling to reconcile with them in the present. Shifts in colour and lighting accompany the metaphorical unpacking of props from boxes as a way of unpacking the memories themselves when scenes transition, a poetic touch I appreciated. That we never actually see or hear the departed Kevin, only the other side of interactions with him, helps to underscore his existence now only as a memory all parties strive to hold onto their definition of, as a missed and longed for presence. The emotional need and damage otherwise on display is forceful and even ugly enough to be difficult to watch at times, and all the more real for it. The main flaw of the performance as a whole are some moments that seem drawn out and lingered in for far too long, to a point of them feeling padded or repetitive. Relatedly, I had some difficulty with a revelation near the end of the show. The seeming underlying message felt both emotionally fraught, and the extended time spent focusing on it blunted some of the impact and weight of earlier sequences, sucking up their oxygen.

Lauren and Amanda Do It
Talking about sex can be rough and awkward, even with people you know well. It’s a bold choice then to mine the topic for a mix of conversational insight and improvised comedy in front of an audience of strangers. Lauren Cauchy and Amanda Logan built a 30 minute sort of variety show out of the idea of diving into talking about everything from love and relationships to masturbation, and they carry it through on a very winning sense of charm, humour and energy. The pair play well off of each other, Ali Harris their musical accompaniment, and the audience all at once, while working in the presence of a special guest to each performance. There are prepared skits, though they don’t work as well as the back and forth banter between the performers, which feels more like the heart of the show. The unabashed willingness to tackle audience questions, discuss relationship successes and failures and roll off the subject chosen by the wheel of sex topics gives the entire performance a feeling of personal connection. At half an hour, the show sometimes felt rushed to fit in all the moments of conversation and performance, but some of that came down to wishing there was more time to spend with it.

Possessed
Possessed invites its audience to join Sarah on the most critical night of her journey to become a Manshin (a shaman in Korean traditional indigenous religion) as she is inhabited by the spirits of various figures of her past and heritage. As one of the festival’s works in progress, the show was an enjoyable experience that offered a sense of its future potential. Diana Bang (also the play’s writer) is convincing as the vessel for a host of personalities, against which the would-be shaman tries to define and come to terms with her own identity. The changes in mannerisms and motions are well thought out and differentiated. It’s deeply impressive to see someone pull off a one woman show based at times in active argument and strife between the characters they are portraying. An unfortunate limit of the play’s 30 minute time frame, and possibly the care given to portraying those different voices, was that it is less clear what exactly Sarah is learning or resolving from the experience, or what resolution she manages to reach with the tragedies of her past, if any. The occasional horror movie touch is also blunted by the outright goofiness of some of the props, but it’s hard to really hold that against the piece as a whole when it’s still being polished. The shift to the compelling, ethereal dance sequence the piece closes with is where the sense of a spiritual otherworld feels strongest, reconnecting both the performer and the audience to Possessed’s mystical overlay.

Athabasca
Athabasca is by far the most topical of NSTF’s offerings, and that both strengthens and undermines what it offers. If by 2019 you don’t have a strong opinion on topics like climate change and the oil sands, the shifting state of the environment we live in should helpfully oblige you to develop one soon enough. In that sense, the way the show plucks at and plays into various viewpoints is really a lot of preaching to the converted, in one way or the other. I don’t see the show’s confrontation between an oil company executive and a once journalist pushed to violent activism being a performance that shifts anyone towards fresh revelation. There’s also something honestly off-putting about the vehicle for talking about the terrible impact oil sands development has had on Canada’s First Nations being the angry words of a middle-aged white man. A considerable amount of the dialogue boils down to the sort of back and forth debate talking points that you’d find at a TED talk on the subject matter as opposed to a living, breathing exchange. It’s at the very least strongly delivered dialogue, which is nothing less than what I’d expect from performers with histories like those of Richard Greenblatt and David S Craig. Craig’s PR flack is even slick enough to remind me of the actual corporate reps I’ve dealt with in my own career. And Athabasca makes genuinely effective and engaging use of its site-specific setting, a borrowed office from the Carpet Factory, without coming at the cost of visibility or staging difficulties. But there’s an inescapable feeling of this being a polemic first and performance second, not helped by a very convenient ending that feels like something out of a very left-wing journalist’s slightly grim fantasies (I say this as a very left-wing journalist who sometimes wishes real life could be that convenient).

Lucky
Lucky is a set of strong performances and sequences of dialogue in search of a purpose, or at least a narrative. Ostensibly inspired by the grim, real life story of Jennifer Pan, a Vietnamese-Canadian woman who ordered a hit on her parents, Lucky is less a narrative reconstruction, than a single scene thematic exploration of cultural, familial and societal pressure, prejudice, power dynamics, and frustrated dreams. There’s nothing wrong with that, certainly, but it’s tricky to want to link to true life events yet not really tell a fuller story based on those events. The show is so much more interested in exploring ideas and emotions that the narrative directions it takes to get to them sometimes feel perfunctory and almost random. That approach makes the performers feel less like fleshed out characters in their own right and more delivery mechanisms for monologues. To go within the span of minutes from discussions about classism, racism and one-night stands, to having to take seriously the idea of someone genuinely considering murdering the parents of a girl they just met strains a sense of realism. It’s hard to feel anything realistic about the connection, manipulated or otherwise, between Nina, the Jennifer Pan stand in character, and Sylvain, the ex skinhead she’s cajoling (who doesn’t represent anyone particularly from the real-life case that I could tell). There is a headlong rush into intimacy and deep personal confessions that doesn’t really feel earned. To the show’s credit, Christian Jadah (Sylvain) and Katherine King (Nina) emote with such searing, blistering intensity that they transcend difficulties in framing. They allow for being able to temporarily forget that the pathways to get to those experiences of emotional interaction aren’t very clear.