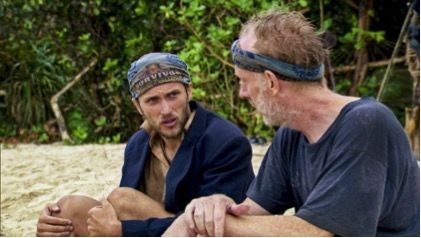 We’re getting right down to the wire, folks. The time of the season that I start looking toward what kind of sparkling wine to buy for the finale to either pop in celebration in the event of a Davie, Angelina, or Alison win, drown my sorrows with in case of a Nick or Mike victory, or stare pensively at, quietly reflecting as the bubbles dissipate, pondering the relative balance, the victories and disappointments, of the universe if Kara pulls it out. In many ways I feel as if I lost my last, best hope in the most recent episode. There was a threat of Christian marching to the end on idols and meat shields, and perhaps it would not have been the most shocking and uplifting victory as it was one we could have seen coming from episode one when he studied slide puzzle algorithms to beat the Goliaths on that boat, but how on earth could I ever be mad at a Christian victory? He was the one I was banking on to defeat Nick, and now I have more anxieties than hopes going into this week.

On the heels of Nick pretending to find another idol, Davie, Kara, Christian, and Alison create a highly stannable contingent to get Nick out, citing his status as both untrustworthy as he tried to fool his ally Davie, as well as a huge target given his “double” protection, which only Davie seems certain is a lie. What Davie doesn’t seem certain of is how to not disappoint his audience by immediately changing his mind as soon as Nick reveals that [gasp] it was a lie! Apparently this bit of information was such a dramatic display of faith and trust in Davie that Nick is no longer a threat, and for some reason Davie has decided that actually he should keep Nick around and risk losing to him in the finals all because his ego is no longer bruised! Great! All I can say is that it’s an incredibly testament to Davie’s pure likability and his knack for this game that week after week he frustrates me and I root against all of his decisions, yet I’m still hoping he wins this season (assuming Angelina and Alison don’t really have a shot in the jury vote).

Interestingly, the reasons I like Angelina and Alison so much are completely in opposition to one another, and at this point I think I like them both more because the other is still around. Alison is not the kind of character that Twitter goes nuts for. She’s not a “yas queen” type or a massive personality, but she is here to play. She excels, or at least plays her hardest, in every aspect of the game, and clearly cares deeply about winning. Letting Mike in on the plan was a move that elicited boos and hisses from my living room, but it was an effort to make moves of her own and make sure that she was active in a plan and not just sitting back being told what to do. She’s not a waste of a spot because she’s playing her hardest, she’s just a normal person with a great job, yet a job that real people have,and I just find it easier to find the magic in rooting for normal people on Survivor. I know extraordinary doctors yet have trouble connecting to an NFL cheerleader. It isn’t a knock against Kara, Survivor will always need the pretty girls with extraordinary lives, and to Kara’s credit, she has proven to be much more than just a bikini babe casting choice. Yet Alison brings her relatability and independence and a rocking body and a love of Survivor, and I think Survivor does well when it invests in regular women who are fierce competition on their own merit, without needing the best soundbytes or gif-able moments. We have other people for that, it can’t be everyone in the cast.

Alison is balanced perfectly by Angelina, who has all of that fire and love for the game, without the challenge prowess and with the incredible TV moments. You can call her insufferable, but she is genuine. She’s a nutty lady who is genuinely so funny, often without trying, and her behavior is just subtle enough that she doesn’t come off as a Coach or Phillip or someone playing up absurdity for the camera. Whoever pushed for Angelina in casting (rumor is it was Probst himself) saw a unique character that we haven’t really seen before. I find her fun and fascinating and outspoken and overconfident and insecure and determined and irritating and this is what I want to see out of Survivor. Three women who (while all admittedly gorgeous) represent different types of women who watch the show. Quietly determined, manipulative and bubbly, brazen and outspoken. This season did a fantastic job with its women, and I think any three we could have ended up with at the end here would have had me singing their praises with regard to a diversity of personalities and gameplay styles. I still miss Gabby though.

I suppose the big centerpiece of the episode was Davie getting the Ghost Island twist where you can sacrifice your vote for using an idol longer, but this is such a no brainer to me that I barely think it was worth all of the time dedicated to Davie’s (ultimately correct) decision. I appreciate him playing out all of the scenarios, and genuinely believe that he was looking to be dissuaded and would have interpreted anything as a sign from God not to do it, because it is final seven and Davie is not a moron. Beyond that, the highlight of the episode was actually finding some symbolic meaning in Probst’s endless ball jokes during the immunity challenge, which came down to a showdown between Alison and Mike. In his narration Probst offers all kinds of uncomfortable ball injury, but the most prophetic was Angelina’s sideline commentary after she dropped out of the challenge. From the bench, Angelina notes, “Once they separate, you’re screwed.” Angelina is of course referring to the balls on each disk in the challenge, but it also applies to the pairs we’ve seen in this game. Gabby goes out and Christian is the next to fall. If they were smart they would see that this is the case with Nick and Davie as well. As long as they are both in the game they will both be more protected, whereas isolating them makes them easily the biggest target and able to be voted out with little convincing. Sure, Christian is a huge threat to win and had to go eventually, but he is on his own. Perhaps Alison’s reasoning for letting Mike in on (and hence ruining) the Nick plan was that she genuinely believed that Mike was her partner in the game, and if they separate, they are screwed.

Ultimately, Mike was the victor of the challenge, against his partner Alison, and this creates a bad scenario given that it emboldens him to do something weird like run around the island convincing everyone to vote for Christian and then not actually even voting for Christian. However, it was a good thing in that we have now had seven unique individual immunity winners, which is a Survivor record, and adds to the absolute preposterousness of Alison constantly being a target because of her physicality, when she’s won the exact same number of challenges as… everyone. It’s almost like they’re just desperately looking for a reason to vote out anyone except the people who are actually going to win in Nick and Davie!

I will end with a final thought inspired by much of the talk at tribal council surrounding “voting blocs.” One of the reasons I think we all love this season so much is because everyone genuinely loves the game and treats it as a game and doesn’t take things personally. However, if I can nitpick this great instalment of the show just for a moment, maybe I don’t like that no one gets hurt over votes. Nick coming back fuming after Christian betrayed him was more of an exception than a rule, and even he got over it pretty quickly. But I want these people to care that they were betrayed. I want the fire that they have for this game to be entwined with their emotions, because I want their emotions to fuel their games. You can say I’m a gamebot hater, but that’s not the case. I just find Survivor to be uniquely great because it is uniquely human. I can’t imagine going out there and not getting hurt. I want to see them feel it. Voting blocs make for exciting strategy, but my hope for the finale is that the jury and the finalists alike show their passion for the game bursting out of them, and we don’t get a tepid Millennials vs. Gen X final tribal council which is more akin to shaking hands after a little league game than the bloodbath that Sue Hawk laid the foundation for all the way back in season one. We’ve now seen the show deliver on every single episode of this season so far. Let’s do it one more time with feeling.