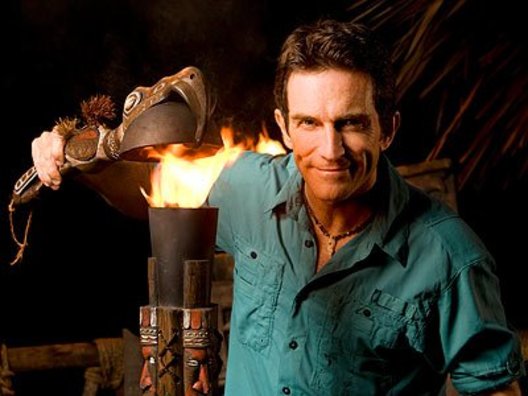 This is Jeff Probst’s 5th nomination for Best Reality Host in the My TV Awards. He’s already won it twice (2010 and ’11), not to mention the 4 Emmys he’s wracked up in the 5 years his category has existed. He is considered the single best reality host in the business and it’s easy to see why in moments like last week’s Survivor when he counselled Brandon Hantz off an emotional cliff and avoided a physical altercation by thinking at lightning speed on his feet as soon as the fighting began. Everything from his play-by-play challenge commentary to the tricky debate he provokes then moderates at tribal council reveals a unique brand of insight and serious psychology swagger within the toughest hosting gig on TV. He’s the best, end of argument.

The new Survivor season is in full swing, he’s busy promoting his new YA novel Stranded, and his CBS talk show is still airing new episodes every weekday, but Jeff somehow managed to find a few minutes to answer our questions. Read on to see what he had to say about the show that changed TV forever.

Hi guys!  Thanks for the nice recognition!

Let’s start at the beginning- how did you get the Survivor job? Did the concept sound strange or brilliant to you when it was first explained?
I had been up for a couple of other network shows, one of which was at CBS so I was lucky enough to be called in for a meeting with Mark Burnett.  The moment I heard the concept I was hooked.  I wanted the job.  Never a doubt.   It was several months from my first meeting to the day I got a call saying “It’s you and one other guy.”  The other guy was Phil Keoghan.  Turned out okay for both of us as I got Survivor and Phil got Amazing Race.

When did you know for sure that it was going to work, let alone be a huge hit?
We felt it was going to work on the very first day when Richard Hatch and Sue Hawk were going at it on the beach.  Richard had taken the power position in a tree sitting above Sue who was working underneath him.  While Sue carried wood back and forth, Richard lectured about “needing a plan.”  Finally Sue said, “Where I’m from we work while we talk.”  In that moment was the essence of the show.  Strangers from different walks of life having to work together.

The premiere of Survivor changed the television landscape forever, kicking off the Reality TV revolution. How do you feel when you see the repercussions and rewards of that so prevalent on TV today?
In the beginning it was fun to see a new competition reality show borrowing elements from Survivor.  Now it’s so commonplace that I don’t even notice.  The key to Survivor is the format and that’s what people are striving to emulate – the conventions that make Survivor work.  They’re smart to steal – the Survivor format works in a variety of different worlds – everything from fashion to cooking!

More and more you seem to be getting people on the show who are more interested in the title of Sole Survivor than the million dollars. When do you think that shift started to occur and what does it say about the challenge of the show and the contestants it attracts?
I think the show has always attracted a variety of people who are playing for a variety of reasons.  It’s one of the reasons the show resonates with the audience so deeply.  We all are on our own journey and at different points in our life we respond to different calls to action.  A million dollars is still a life changing amount of money for most people, but you’re right there are often just as many people doing it for the experience and nothing else.

Of all reality show hosts, your job seems to be the hardest, especially when it comes to moderating debate at tribal council. How do  you prepare for that? Do you have any information at all about what’s been going on at camp so you know which scars to pick?
I love tribal council.  It’s one of my favorite parts of the show because everybody is so vulnerable.  There’s a big vote about to happen and nobody, absolutely nobody is certain they are safe.  As far as for what I know, I know the basic beats.  For instance, I know if the tribe is out of rice or if there was a massive fight.  But I don’t know the small stuff.  I don’t need to because my questions are usually initially pretty broad – who is pulling their own weight, who do you like, who seems unhappy, etc  It’s only through their answers that we get down to the nitty gritty.  I could never watch tape, we shoot thousands and thousands of hours of footage.

You serve as a sort of coach/interrogator/referee/therapist hybrid on Survivor (to hear Dana talk about you appearing at camp with the medics last season, you’re also a guardian angel). Did all that set you up to handle anything a daytime talk show could demand of you?
Ha!  Given that our talk show is not being renewed… maybe not!  I love Dana’s comment, it’s very generous.  I care deeply about the contestants.  They don’t always believe me. For instance, this season Shamar told me he didn’t think I cared about him at all.  Not one bit.  But I truly do.  They are undergoing something so incredibly challenging.  Sometimes my job is to push them or to point out who is not doing a good job, but in my soul I root for each of them.

All evidence suggests you could host just about anything. What went wrong at the Emmys? Do you think you could do it if you didn’t have 4 other people to maneuver around? Any interest in trying again?
Thank you for the compliment and gentle way of saying “The Emmy’s you hosted was the worst in history!”  I think the problem was we had five people.  Each of us had a point of view about how to approach it and we just steamrolled the Exec Producer.  There wasn’t any consensus about how to approach the show from a creative point of view. It was a perfect storm of disastrous decisions.  The funniest part was that Ryan and Howie and I were writing the bad reviews about two weeks out.  We knew we were in serious trouble.

Final 2 vs. Final 3- from a purely game perspective (as opposed to a production one), what’s the benefit of keeping the less popular 3-person finale?
It’s an ongoing debate.  For me the reason I like final three is that it keeps the winner of the final immunity challenge from simply bringing the least likable person with him/her to the end.  A final three keeps it up in the air a bit more and as a result people who do not win their way to the end can still win.  There is definitely not a right or wrong answer on this one – just preference.

Survivor had been around for quite some time before the game-changing twist of hidden immunity idols came into play. How did that idea first come about and could producers sense right off the bat how drastically it would change the game forever? Could you foresee another permanent twist down the road dramatically changing the game again?
The hidden idol twist came the same way all of our twists come about – from our always ongoing creative brainstorms.  We decided to throw a wrench into the works by giving one person a “free idol’ – all they had to do was find it.  We had no idea it would turn into one of the biggest twists in the game.  Now I can’t imagine a season without them.  People often suggest that we should do a season without any idols or switches.  Proof that sometimes people don’t know what they really want!  As Henry Ford said, “If I’d asked people what they wanted they would have said a faster horse!”  We will never go backwards, the show is always moving forward.

Speaking of twists, what do you think are the best and worst ideas the show’s ever introduced as a season’s Big Twist?
Worst was Medallion of Power.  We knew it was bad.  But it had a momentum and had been approved and much like when I hosted the Emmy’s there was no stopping the disaster that was about to come!  Best idea?  We’ve had a few – Exile Island, Redemption Island, kidnapping, hiding clues in the rewards, ah I could go on and on!

No matter how much you manage to squeeze in, the Reunion show never seems long enough. Have you ever thought about expanding it?
I agree with you but there just isn’t anymore time left in the evening.  We already cover the entire night of prime time from 8-11.  We just have to do a better job of covering material.  I work on it every year and this coming season we’re going to try and mix it up a bit with some new ideas.  We are just now meeting about how to freshen it up.

Why don’t you take the votes on an epic water-skiing, sky-diving adventure on the way to the finale anymore?
We ran out of ideas!  I loved doing them but it came down to ideas that just didn’t work and so we stopped!  I’m open to ideas!

What is the one question you most regret not asking during any reunion show?
Oh there are many. I miss great questions all the time.  Every day.  On Survivor, talk show, and in life.

What’s the biggest thing that’s ever gone wrong production-wise? Has there ever been something that affected the outcome of the game?
Nothing has ever affected the outcome of the game.  We wouldn’t let that happen.  If we screwed up on something we’d fix it.  The players can never suffer as a result of something production does wrong.  We are very careful to make sure the game is always 100% fair.  Fortunately we don’t have many problems.  We plan, we test and we rehearse so when the Survivors arrive we are ready for them.  They probably have no idea how much prep has gone into something before they arrive.

Who’s the one person you really wanted to have back but they couldn’t/wouldn’t do it?
There’s a few – Elisabeth Hasselbeck won’t do it. Shambo from Survivor: Samoa won’t do it.  Colleen Haskell from season one won’t do it.  Otherwise most people are pretty game to come back again.

If you were to play the game, whose strategy would you try to emulate?
You can’t emulate anybody’s strategy (in my opinon) because the key to Survivor is being adaptable.  Boston Rob , Parvati, Sandra are all very good players but one of the keys to their success is that they assess all the time and can adapt in a moment.

Who do you think is the all-time best Survivor player?
Impossible to answer but I’d be happy with Rob, Parvati, Sandra, Cirie.  Now I’ve just annoyed the other 400 who’ve played the game.

Is there anything you’d like to add?
I appreciate the questions and the thought you put into the interview.  Thanks for including me in your world!