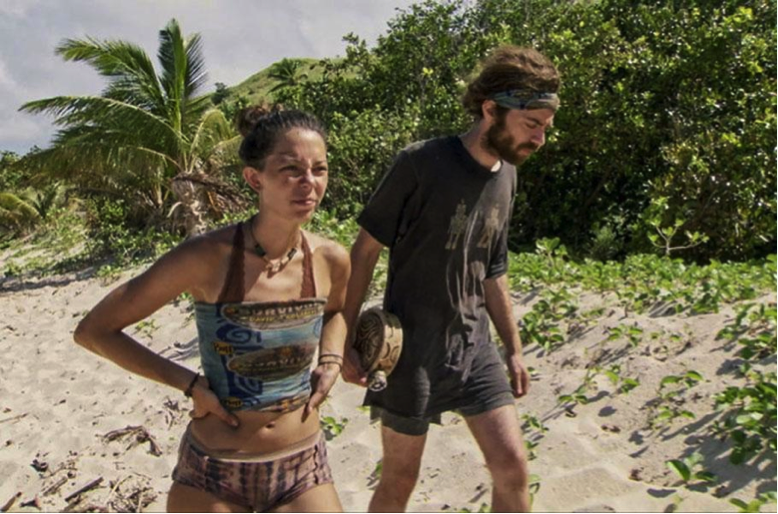 Despite this episode happening on the Jewish holiday of Hanukkah, this was an extremely Christian week, as our favorite robot-shirted storyteller slipped by another tribal council. Happy for him as I am, this week we are in mourning. Gabby Pascuzzi was a fantastic character, a cut-throat player, and a complex woman who advocated for ending the stigma of vulnerability and the cohabitation of power and tears. I want to make absolutely clear that my position is that Gabby had to make this move. She is a player who would rather come in 7th trying to win than resign herself to automatic second, which is what would have happened when the clear jury threat still has an idol this close to the end. I also don’t think it’s reasonable for her to expect Davie to tip Christian off. Davie’s meat shield theory is fine, but Christian has a proven ability to win immunity, and Davie is dangerously close to accidentally winding up in the final 3 with Christian, a battle that he shouldn’t expect to win, regardless of how good of a game he’s played. The simple fact that Christian has survived this long while being this huge of a threat automatically makes his game more impressive to a jury than Davie’s, who has slipped under the radar and survived with less adversity. Perhaps this is unfair, as it is an even better strategy to maintain safety rather than cling on for dear life at every vote, but the flashy game will always be the more compelling case to the jury so long as you didn’t piss everyone off, which isn’t really in play with this delightful cast. I will almost certainly be proven wrong as this is probably informed by my sadness and desire for vindication for Gabby, but I think this was a mistake on Davie’s part, and I will remain bitter that he ruined the lovely latkes and Survivor party I attended on Wednesday.

Looking in more depth at the endgame, now that we are so close to the finale, it’s time we prepared ourselves mentally for some unpleasant (or at least not fully satisfying) outcomes. Here’s the frustrating thing: There are certain seasons where I have not been into a winner, at all. Sometimes it’s the Mikes and the Bens of the world that fully get their stories articulated and I would still never in a million years root for them. Other times, it’s the Dannis and Ambers that upon rewatches I learned to appreciate, but at the time I just didn’t root for because the editors didn’t give me a reason to. In those instances, it’s often because they were being overshadowed by a man and the editors didn’t give these women their due. I want Kara to be one of these instances, but something just feels off about giving her the benefit of the doubt in this scenario. Maybe I’m just having too much faith in the editors, but they’ve given me a lot of reason to trust them this season. They’ve been thoughtful and colorful with their depictions this season, and I just get the sneaking suspicion that if Kara had more charisma to show us, we would have seen it if she is indeed the eventual winner. Perhaps I’m cynical, but I need to resign myself to the fact that she and Nick are strong – perhaps the strongest – winner candidates at this point, and I have to be prepared if that is the eventual outcome. They’re both playing fine games and will be well-deserving of the check, but that doesn’t mean I find them entertaining, enjoyable, or good television characters, and you don’t have to either just because they’re good at Survivor.

Even in the cases of Nick and Kara who I feel the least personal affection for, this loved ones episode in particular deeply moved me. I always cry at these, but mothers and siblings get me more than anything because those are the two primary loved ones in my life, and this episode was full of them. To sit next to my own Survivor-loving brother while Kara fell apart with hers struck me, and forced me to find myself rooting for her to win the challenge, which I had never done before. That’s why these loved ones visits are so important. You can tell much more about a person by who they love than by who loves them. Just because everyone else in the cast seems to like someone on the island, doesn’t mean I will, but seeing the castaways themselves express love for others is what truly reveals their core. Survivor is great at respecting this, and is why it remains one of the most deeply human reality shows.

Apart from the influx of motherly love, I was surprised by the appearance of Mike White’s boyfriend. I guess I’m extremely late to the party since I haven’t seen his Amazing Race season, but the revelation of Mike’s sexuality was deeply endearing to me and added nuance to his storyline as the Big Shot Hollywood Goliath character, which is already shaded but his obviously less than physically imposing presence. Mike is also someone that i’m not particularly rooting for to win the game, but unlike Nick and Kara, it’s less relevant because I don’t see it as a real possibility. What I am rooting for is that Mike finds whatever it is he is looking for on Survivor. I think he will.

So with only one idol left in the game, and a sneaking suspicion that another will be found, potentially by a woman as to make Angelina’s episode one prophecy relevant, we march toward the finale, the first one in a long time that I am truly not ready for, with so many great characters and game integrity intact, and no crazy twists (that we know of) to ruin it other than probably the Ben Driebergen Memorial Terrible Awful No Good Very Bad Firemaking Production Rigging Twist, which hopefully cannot go possibly as poorly since the person most likely to benefit from it is someone like Christian who I am infinitely happier stealing a million dollars than I was with Ben. We know that this season is great because all of my complaints in these reviews are not actually about the current season, but residual anger over previous seasons. Cheers to David vs. Goliath, and cheers to the absolute queen who broke every archetype assigned to her and found the strength in the sobbing. I will always love her.