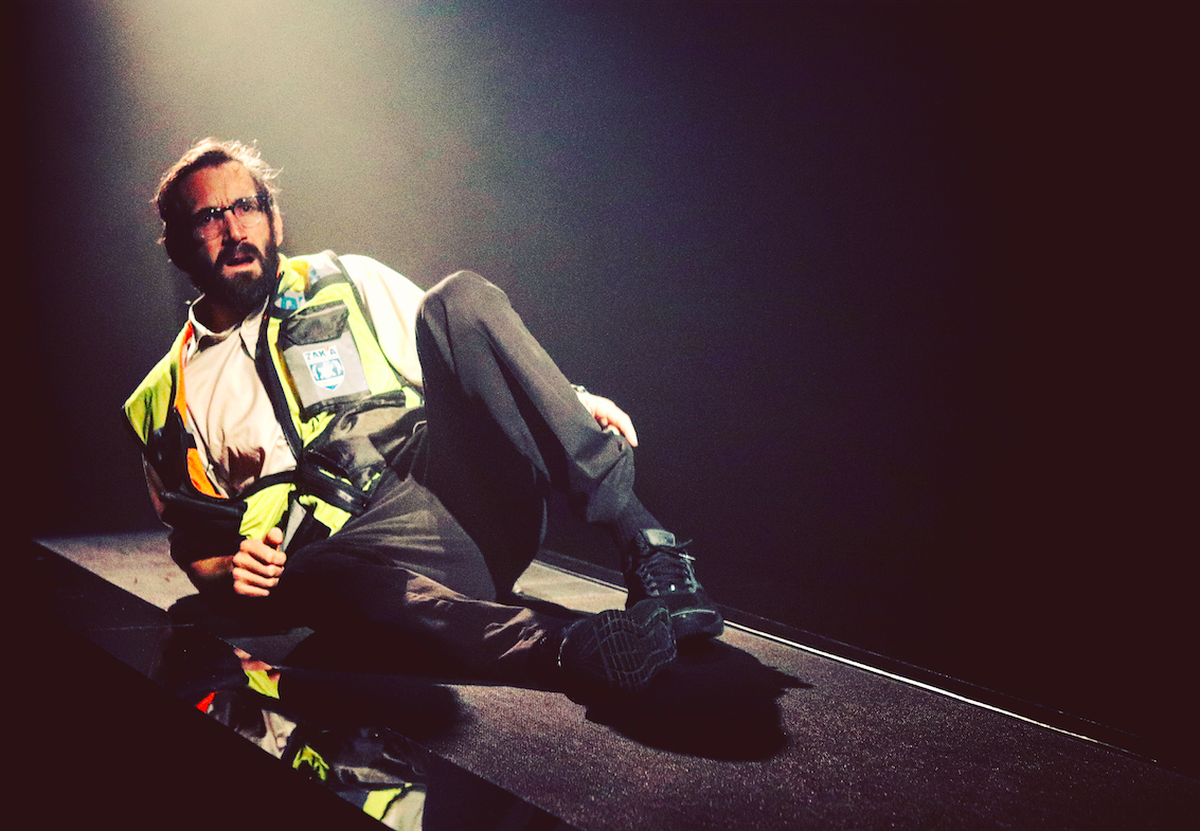 From the shadows at the back of the theatre, a haggard looking man appears. He’s running, breathing hard, and as he approaches us, we see his eyes are wide with confusion and fear. “Why can’t I remember what’s happened to me?”, he cries aloud.

So begins The Runner, Christopher Morris’ harrowing and gripping new play, staged entirely on a forty foot long custom treadmill. Actor Gord Rand, the sole performer, is in motion for the entire 85 minute “run time” of the show; sometimes crawling forward, sometimes jogging, sometimes tumbling backward and sliding almost out of view. The setting for the play, we’re not entirely sure; it’s possible, even likely, that this man, Jacob, is in purgatory. Fractured memories return to him as he runs, and remembers he works for ZAKA, an Israel volunteer aid organization that sends workers to accident and bombing scenes to recover the remains, even the blood, of Jews who must be buried whole, according to Orthodox tradition.

As he haltingly recounts his jumbled memories, it becomes clear that Jacob is one of those people who runs towards chaos, rather than away from it; a man of conviction and compassion. But he’s recently become ostracized by his fellow recovery workers, for assisting “the enemy”, a Palestinian girl who may have killed an Israeli soldier. Jacob’s relentless focus on his grisly calling, and his dedication to his sworn Hippocratic oath over cultural allegiances, has also alienated him from his family, who don’t understand why he’s chosen to devote himself entirely to this volunteer organization, at the expense of a career or family life. But Jacob has secrets that distance himself from others; both his trauma from the carnage he’s witnessed, and his closeted queer orientation.

Jacob’s moral dilemma—to help others according to the rules of triage, where those in greatest need are prioritized, or to prioritize Jews over Arabs at bombing and attack sites—leads him into contention with his superiors at ZAKA, where there is, in fact, such a policy in place. As terrible as his job is, treating victims, even the deceased, with dignity is how he best connects with others; deprived of it, Jacob becomes unmoored, and Rand’s pace on the treadmill increases as Jacob begins a desperate quest to find a connection to someone who might show him compassion.

Rand’s performance as the tortured Jacob is remarkable for its intensity and focus, but it feels like he’s not alone on stage, as the treadmill itself is almost a character. As Rand varies his pace, it seems at times like a musical instrument he’s playing, humming as he jogs at a steady pace, and building to a shriek when he breaks into a sprint. Judicious use of lighting and sound cues (by Bonnie Beecher and Alexander MacSween, respectively) also help the otherwise barren stage seem responsive to Jacob’s emotional state; a low swell of ominous notes as Rand recounts particularly grisly stories of violence, or a stage left light that blinks on in response to Jacob’s shouted questions.

According to his program notes, Morris has been fascinated for years by the workers of ZAKA, even before the organization caused waves in 2015 for publicly affirming it would treat Jews first at crisis scenes. He’s packed a lot into Jacob’s story; the mentality of someone who becomes addicted to responding to trauma scenes, the ethical dilemma of treating both the innocent and the guilty (the terrorists who cause the bombings) alike, and Jacob’s status as an outsider in his society, even apart from his job, because of the conflict between his Orthodox background and his sexuality.

But as grisly as some of the content in the show is (at one point, Jacob recalls digging up a hasty mass grave to recover body parts), the rapidly beating heart of this show is optimism. When Jacob finds unexpected solace, he breathes, “an act of kindness – that’s all that matters.” At another point, despite the pain he’s felt and experienced, he becomes fixated on helping someone, anyone. “I want to go back!” he shouts, as the treadmill starts to whine at he breaks into a sprint. Despite what we’ve seen, we the audience hope that he gets to where he wants to go.

One final note: this theatrical run is a sprint, not a marathon, with Rand’s nightly workout happening for just two weeks, closing December 9th.