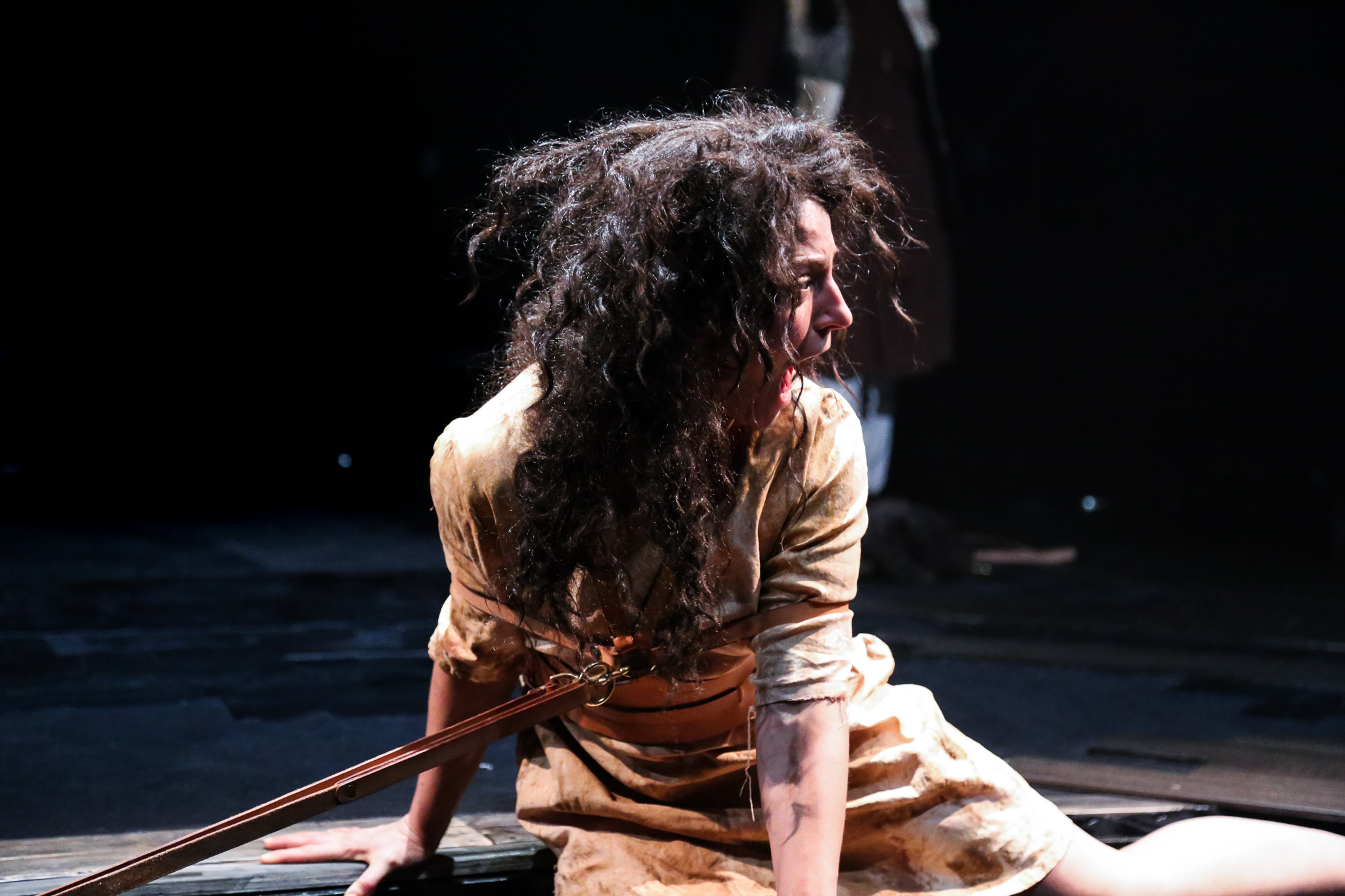 The Philosopher’s Wife, the first part of Paradigm Productions’ epic Empire Trilogy, has a “soft” opening scene in its current staging at the AKI Studio Theatre. Playwright Susanna Fournier introduces the show, taking down the robe of The Philosopher, which has been hanging at the centre of the round stage. She explains that, due to unforeseen circumstances, she’ll be playing that role, with just a couple of days notice before opening; “despite having worked on the play for eight years, I may need to call for a line.” (She didn’t.)

Before the action of the play begins, Fournier also asks a rhetorical question: who is The Philosopher? He comes from money, and privilege, certainly. And, he symbolizes “how the corruption of power sustains itself; it takes the present hostage.”

I mention all this because Fournier having to step in at the last minute seems to me to have been a fortuitous turn of events. In place of a male actor to embody the Philosopher’s unstudied arrogance and casual brutality, we have the writer herself in the role, which further emphasizes these qualities; they are all the more jarring and disturbing when embodied by Fournier.

The robe donned, the play begins with the appearance of Tereza (Aviva Armour-Ostroff) and Thomas (Danny Ghantous), itinerant refugees from the war-torn South, who have made enough of a name for themselves as dog tamers in the monarchy-controlled North that they have attracted the Philosopher’s notice. He has a unique problem; while away at court, where he is currently out of favour with the ailing king, his young illiterate wife (Chala Hunter) has suffered several tragedies and turned feral, running wild with the uncared for dogs on the estate. He wants them to tame his wife, so that she’ll bear him a healthy child.

When we meet Hunter’s wild wife, she’s all bristle and bark, chained to a corner of the stage; it takes an impressive demonstration of Tereza’s command of body language (both man’s, and beast) for her to be approached. She warns the Philosopher it will be some time before he can be in his wife’s presence; “Your need makes your love heavy,” she tells him, “it must be a ball you can throw.”

So the four settle into an tense routine; Tereza spends her days working with the Wife to train and then re-socialize her, while the atheist Philosopher takes an interest to the religious, unstudied, and timid Thomas, who suffers from poor health – a condition that will worsen when he gains access to the Philosopher’s pharmaceuticals.

While the focus remains on these interpersonal dynamics, the show is riveting; Armour-Ostroff, in particular, is sublime. (I’ve seen every show she’s done in Toronto for over fifteen years, and this is her best role to date.) Her Tereza doesn’t miss a thing—about the power imbalance between her and the Philosopher, between him and his Wife, or the dangerous political situation brewing outside his walls—and her and Thomas’ vulnerability both on the road, and under the Philosopher’s thumb.

Where the show sags somewhat is in the second act, when those external pressures–and the overarching history of The Empire, as this show is the first part of a trilogy Fournier has written—come into play. As Tereza and the Philosopher increasingly are at odds, and she realizes how bound she and her brother have become to his fate, ww come to understand how she innately understands his arrogance in the face of the censorship of the priests, and the whims of the monarchy, may doom them all. There’s a foreboding image of Hunter’s Wife standing centre stage on a chair, with a hook (on which the robe first hung) hanging directly above her head (Triga Creative’s set and costume design, as with the other design aspects of this multi-media endeavour, is truly impressive). But the characters’ arguing about the dangers outside the walls are less interesting than when they steer closer to the danger within, as when the Philosopher takes a vicious step to ensure his wife no longer runs with the feral pack, and Tereza confronts him.

This brief lag in the second act, though, is temporary (and like, for instance, the early films of the Marvel Cinematic Universe, necessary to set up aspects of the overarching storyline), and when the enemy at the gates does arrive, as in the final scene of Hamlet, the denouement has already occurred.

Director Leora Morris has done an exceptional job at blocking the show in the round, and we get to absorb all the subtleties of the cast’s performances; Ghantous’ hapless Thomas, as he learns his letters (and picks up some unsettling character traits) from the bemused Philosopher; Hunter’s wild girl, who has some fraught encounters with Thomas, and whose “re-socialization” leaves out chunks of what both the Philosopher and Tereza intend. But it’s Tereza who we keep thinking back on; her difficult choices in an absurd situation, her empathy for everyone around her, even when they haven’t done much to deserve it. She’s the moral centre of the show, no question, and Armour-Ostroff imbues her with wit, sensitivity, and a deep sense of loss—both in the past, and in what’s to come.

It’s an excellent beginning to Fournier and company’s ambitious undertaking, which will continue in January and June 2019. I hope to see more of her strong writing and character work in the next two parts of the trilogy (even if she’s not on stage).