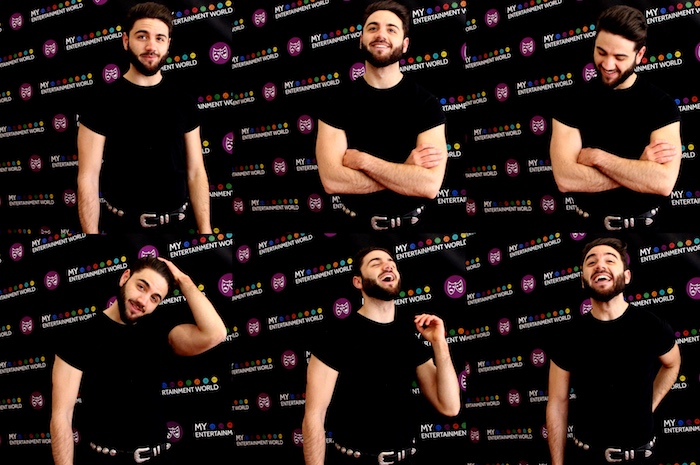 Danny Ghantous was asked to play one of the least likeable characters in Shakespeare’s canon when Shakespeare in the Ruff took on A Midsummer Night’s Dream in Withrow Park last summer. Faced with the question of whether Demetrius really was nothing more than a “fuck boy” (important Urban Dictionary background reading available HERE), Danny looked for an empathetic solution, a way to play this character as more than the sum of his behaviour at face value. And he found it. One of the fastest rising young actors in Toronto these days, Danny completely redefined his character and stole the show to earn an Outstanding Supporting Actor nomination.

Do you remember your first experience with theatre?
I think I do. I was in second grade or first grade, and the teacher wanted us to put up The Emperor’s New Clothes. I played one of the men trying to con the emperor into thinking that this cloth was very brilliant, and I remember being in the background while the emperor was talking, and going out in front of his subjects basically half naked. I don’t know how we pulled that off in first or second grade, but somehow we did. And I remember me and my two other friends just trying to find different ways of being Machiavellian and snickering in the background, and how we could play with how evil we were in the background to draw attention to ourselves. We were just twirling our invisible moustaches.

The first time I saw you was in Andrew Markowiak’s play Lemon. What stands out in your memory about that experience?
The first thing that draws me is actually trying to audition for it, because I had a huge flu at the time, and wanting to get the comedic timing down because he was such a loud character. Trying to use that, but my voice [broke] every time I tried to begin a sentence, and I just walked out of there going “Oh, God”. I think I ended the audition going, “I’m so sorry, I’m so sick,” and they were like, “No, I think we have what we need.”

How did you get involved with A Midsummer Night’s Dream?
Right after graduating from theatre school, I was approached by AJ [Richardson], one of the members of Shakespeare in the Ruff. He asked if I wanted to be part of the Young Ruffians, and that included me giving over some time for them to do advertising while they would help workshop Shakespeare monologues with him and Brendan McMurtry-Howlett, and bring in guest artists that just helped facilitate teaching Shakespeare text and direction, and everything like that.

So it was give and take, and we would do advertising for their show, which was at the time, for that summer, Romeo and Juliet in the park. We would go around to farmers’ markets, and put on little skits using our monologues. After that, they got to know me, and asked me to come out for Midsummer as Demetrius, and I met Megan Watson [director] there in the audition room, and it just took off from there.

You wrote an article for Intermission about your journey to empathizing with the character, who on the surface appears pretty simply misogynistic. Tell us a little bit about that experience, and how it ultimately shaped your performance.
I think all actors need to justify their characters’ actions. It’s a given. I remember just sitting in the room when we were talking with Megan, and she brought up a good point: is this guy just a fuckboy?

I said, “I’m not really sure”. Because at the end of the day, what are we doing by saying that this guy who takes advantage of the system and takes advantage of women and uses his power over them – what are we saying about him winning at the end of the day? About him getting the girl, and that it’s okay to act in this manner, and you’ll still win, and everything will still be fine with you, and he just ends up with this girl who he doesn’t really love, but because of some magic potion. That doesn’t give much depth into what we’re saying to an audience now when we’re trying to put up this show. Especially in this time.

I can only bring my past experiences, and that’s what I have. So what if the idea is that he’s forced into this situation as much as anybody else in the play? And though he may not want to go through with it, he’s forced to succumb to these relationships because of an over-arching patriarchy.

What were some of the changes that that made to the actual text itself and the way you delivered certain lines?
It was a constant battle. It was like playing subtext. It’s underlying. Does he say what he means, or mean what he says? I think that is there in the script. It’s easy to play with. It’s hard to revisit, because I haven’t looked at the text in a long time. but it’s the idea that I think a lot of the time, we as people – and even as men under a patriarchy – are told that we have to think or act a certain way. And our real feelings don’t come out that way. We subdue them. And I think that’s what I tried to find in Demetrius. How can I find a way to say the words that I’m supposed to say, and fight the feelings I’m not supposed to have?

Tell us a little bit about working with the other three sides of that love square.
It was really fun. Especially using the subtext that I gave to Demetrius. It was great to find that play of “When do I falter to my emotions, to this person, and how do I battle my relationship even with Hermia?” Trying to woo her even though I don’t [want to]. So it was a constant check for each other. Even for Hermia to see inside me and go, “You don’t want this as much as I don’t want this, so why are you doing this?” That play between it, but also when the love potion hits, everything’s flipped on its head. Those interactions just become so much more heightened and fun and able to play with. It was a constant game of fishing, really – seeing what tactics worked, and what didn’t, and trying to reel someone in with our sexuality, or different types of posturing, which is always fun.

Tell us a little bit about working with Megan, and some of the interesting conversations you had developing the idea of your character of Demetrius.
I think when I approached her with the idea, she was very gung ho about it. I think she allowed for a lot of that play, and tried to challenge me that I didn’t need to play the subtext, that it was there. But given my nature, and given the words that are said, and given the relationship between me and Helena, that it will be there – I was thankful to have her there. I didn’t think I should spoon-feed the audience in order for them to understand that I was fighting the patriarchy, or that I was fighting my emotions for Helena.

How much tablework and textwork did you guys do before you got it up on your feet?
If memory serves me right, we did a couple of days. But it was a constant check when we were up in the space, because we played with text in the space. We would always go back to Megan and talk about how the text should be broken up, because I think [that] so much of the text and how it’s played is determined with how you use that space between the two trees. Heightening certain languages, or certain parts of the script, is dependent on where you are between those two trees, and in the environment. The story changes even with that.

Speaking of the two trees, there are always strange interruptions and complications that arise from working outside. In that specific park, because you don’t have a set stage, you really do use the space between two trees. What are some of the funny memories you have, or weird interactions that happened during your run?
First – and I think they have it on video, actually – there’s a point at which Demetrius and Lysander are going after each other, and want to kill each other. We get lost in the darkness on opposite sides of the tree. While doing my Rambo-style hunting for her, a huge Newfoundlander dog who had sometimes been with us in rehearsal – because it would pass by, and everyone would drop everything to go and pet him – [he] happened to be there and saw me jumping around, and doing all these Rambo-style moves, and he decided to jump on me and play with me in the middle of a scene in which the entire audience looked, pointed, and started laughing and completely lost track of what was actually happening onstage at that moment. So I kind of stole the show with a dog. He got so excited at one point, he bit my arm. Not too hard or anything, but enough for me to say, “Okay, I think I need to drop this shtick for a little bit,” and everybody’s eyes were glued to the dog. So that was a great moment.

But I think what’s so great about Shakespeare in the Ruff is that it allows so much for the community. It allows anybody with no background in Shakespeare or the text to just drop in and see what this is about. So much so that people walk through the set. And we have to allow it, because this is what we’re doing it for. We’re doing it for them. We’re not doing it for us. And it’s so devoid of any sort of pretentiousness. It allows for that sort of interaction and disturbance.

Did you have a favourite moment in the play?
Yeah, right after being struck by the love potion. [laughs] The kind of posturing that ensues out of it to get Helena’s attention by me and Lysander, was just improv almost every day. There were bounds with which we could play with, but trying to grab their attention and see what we could do to top each other was always a great game to play that I think the audience really enjoyed watching.

What are you up to now or next?
Right now, I opened a show last week called The Invisible Hand, at Theatre Aquarius in Hamilton. That’s about it for right now.

Do you have anything you’d like to add?
A thank you to Shakespeare in the Ruff for giving me the opportunity to play that character in the way I did, and for Intermission for asking me to write that article, because it took a lot out of me, and it cost me a lot to do. I was very scared putting it out, but I had a lot of support from them, as well as any cast, and all the people at Ruff, and I want to thank them both for that.