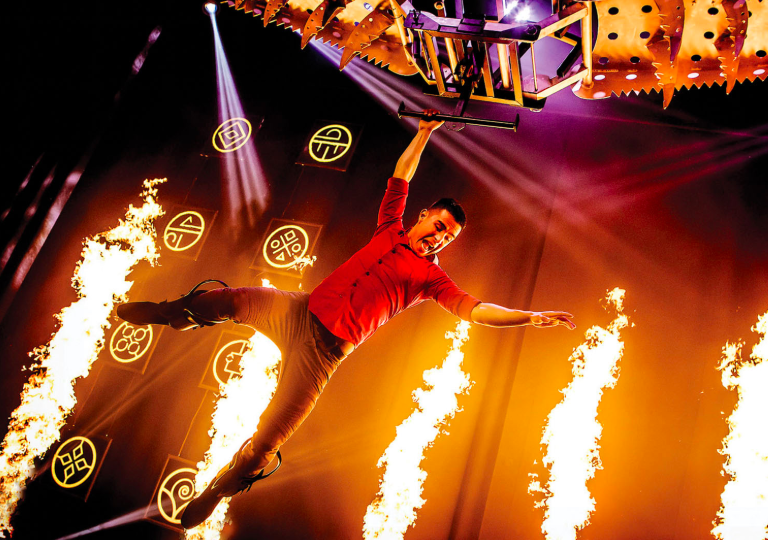 On Tour: Champions of Magic

At first glance, magicians would seem to have it rough in the twenty-first century. No matter how much practice and skill goes into mastering a seemingly inexplicable trick, one whose origins may go back centuries, the audience’s wonder is more likely these days to be tempered by a quick google search, where a mercilessly quick and straightforward breakdown explaining how the illusion was achieved can be found. And yet, if the packed house at the St. Lawrence Center leading up to Christmas was any indication, the availability of fast answers hasn’t diluted the enthusiasm for seeing such tricks pulled off with flair and dexterity (and, in this case, a substantial lighting and sound budget).

Five magicians come together for this slightly fragmented but enjoyable (and successful, having toured in England on-and-off for the last five years) two-hour show that spans the range of magical spectacle, taking us from Vegas-like showstoppers featuring vehicles appearing out of nowhere and levitating audience members, to the scrappier and more intimate quick-handed deceptions involving cards and inexplicably mobile props. We also get some mind-reading, presented by Alex McAleer, a knowingly campy and natural audience-pleaser who on the night I attended skillfully handled a volunteering audience member who had a little too much fun not following directions. His energy most effectively carried the night, but close-up magician Kayla Drescher, who frequently ventured out into the audience and nicely balanced performing for both the audience as a whole and a roving camera that followed her through the theatre, was also a highlight. Young & Strange, the biggest names of the night and the only double-act, are slick and charismatic, nicely negotiating a few slip-ups and displaying a fun dynamic. Finally, escapologist Fernando Velasco performs some of the most high-stakes Houdini-esque bits, and does them with athletic skill and amusing dramatic relish, helped along by very able stage hands, who are of course only there to help out.

Overall there’s a final layer of mysticism that’s missing from the show which for me kept it from being really astounding – a slight sense of going through the motions, a bit too much emphasis on stage razzle-dazzle over truly mind-boggling illusions, and no onstage connection forged between the performers aside from a brief introductory and concluding bit of wizardry. Though Young & Strange’s finale is a true showstopper, explicitly modelled after the shamelessly cheesy and endlessly moving energy of 80s Siegfried and Roy, I was hoping that there might be some big complex trick that could involve all five champions to close things out. But I suppose even in the age of easy explanations, every magician wants to focus on their own unique set of skills. And it doesn’t take too much away from the overall enjoyment of the evening, with its emphasis on spectacle a reminder that theatricality and audience engagement offers something that trick-spoiling explanations don’t. For what it’s worth the kids in the audience seemed spell-bound: as family-viewing alternative to Mary Poppins or Aquaman, this at least offers younger viewers the chance to take part in the magic.