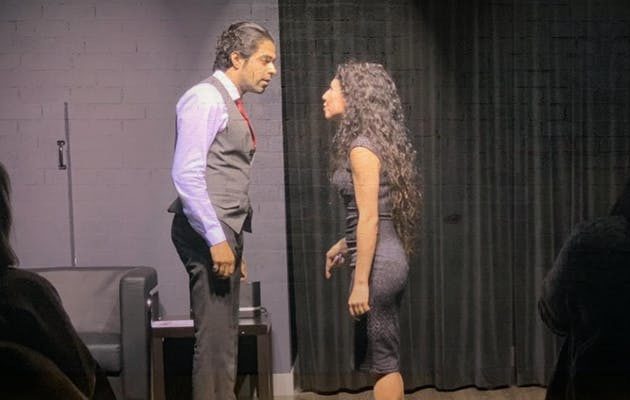 Writer/director Bobby Del Rio’s ambitious attempt to take on the ever-relevant themes of rape and trauma is an admirable undertaking with an uneven execution.

Del Rio points out in the programme that you might assume this piece was written in response to #MeToo. In fact, he wrote the first draft six years ago. The script traces the story of Charlene (Adriana Villi), an enterprising CEO struggling with the traumatic aftermath of rape and its reverberations within both her personal and professional life.

We see her interactions with Rick (Jsin Sasha), an undermining employee and ex-lover, her husband Jack (Rico Garcia), a loving partner, and her therapist (Sonia Suvagau). We also witness her intermittent and intrusive flashbacks to her rapist (Philip Shipley). These scenes weave together to reveal larger, significant truth: trauma of this kind is never ‘in the past’ as some would claim, but viscerally and violently present to survivors.

Villi carries the play capably, particularly given the emotional extremes she portrays. The trauma flashbacks are portrayed indirectly, with Villi and Shipley on opposite sides of the stage, and the result is much more viscerally effective than if they’d attempted to show it directly. The dream sequences involve music and dance and are emotionally engaging, giving us a palpable sense of the intensity and confusion she continuously experiences. Sasha and Suvagau in particular commit enthusiastically to the campy physicality involved in these scenes, with charming results.

The script would benefit from significant pruning of repetitive dialogue and extended dream/romance sequences. Yet for this play to really flourish, it needs more character-based complexity. Rick is an insecure former lover whose current attempts to undermine her seem arrogant and inept, so it’s unclear why he poses a threat. And while Rico Garcia plays Jack’s straightforward affection with credible sincerity, I needed more of the emotional history woven into their current dynamic. As it stands, the play hits many loud, intense notes, and several softer ones, but not much in between, where the interesting stuff really lies. Finally, the concluding scene between Charlene and her therapist suggests not just an unrealistic but potentially undermining conclusion to those who suffer daily with the aftermath of trauma.

The narrative offers a simplistic journey, and while I can appreciate the hope underscoring such a tidy conclusion, a better catharsis would emerge from a script that acknowledges the turbulent and fluctuating reality of survivors, and the resilience that nevertheless exists within it.