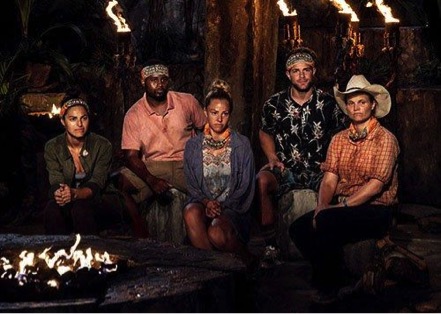 Survivor David vs. Goliath, Ep4: How Do You Solve a Problem Like Alec?

Another season of modern Survivor, another absolutely terrible move for no reason other than for the sake of making a move. It’s nice to know that some things in life are constants – Jeff Probst’s button-downs, surfers somehow always getting cast on reality shows despite the fact that I’ve met exactly zero surfers in real life, and contestants making bad moves for no reason way too early in the game. The circle game goes round and round.

Before I add to the dogpile on indisputable moron Alec, let’s go back to the start of the episode, where we have a quit on our hands. I don’t blame Bi – she’s correct in that her body is her career, so she can’t sacrifice it – but don’t call this a med evac. She could have stayed if she was willing to sacrifice everything for the game, as some are. She wasn’t, and that’s fine, but I’m glad we move on swiftly and still have a full episode. The fabric of the game will not drastically shift in the absence of Bi. That said, it’s worth noting that we still haven’t had an east Asian woman make the merge since Brenda Lowe all the way back in season 26. Bi joins the ranks of Mari, So, Peih Gee, Simone, Rachel, Nina, and and Lucy to continue the trend of every single east Asian woman exiting before the merge since Caramoan. Much like the two black people being on the chopping block last week, I can’t help but wonder if there is more at work here than “just something about” these women that sets them on the outs of the tribe.

In lighter news, we get a fun shake up that makes it very clear which tribe of five to root against, and we get our wish in who loses the challenge. The cringeworthy but admittedly lovable duo of Gabby and Christian gets swapped together, finding themselves in the eclectic company of the Mayor of Slamtown, Insufferable Hot Cop, and Invisible Alison, which is a dynamic I can get behind from an entertainment perspective. I know that I should find Gabby and Christian adorable together, but something about their close talking makes me physically uncomfortable – perhaps my extreme aversion to PDA is kicking in, or maybe it’s just that I like her so much more than I like him. Either way, I’m glad she has him, because all I want is the best for Miss Gabby Pascuzzi, queen of vulnerability and slaying the challenge between meltdowns. Meanwhile, the purple tribe gets Natalie Napalm and Woke Legend Angelina from the Goliaths, as well as Mike who is fun enough, and they get to work with Lyrsa, who still doesn’t get to talk but I still stan, and Nick who is already naming alliances with Mike. I am excited for the inevitable moment at the merge when all of the people that Nick has named alliances with compare notes and all turn on him together; it will be fun and satisfying because (and this may shock you) I am not a Nick fan. However, I have to root for the purple tribe here because I simply cannot live with Natalie going out this early even though she 100% deserves to. I still don’t understand where she came from and how she got here, but I still love her.

So that leaves us with the orange tribe. Don’t get me wrong, I think Davie is a star and I’m happy that he has an idol and was protected for this tribal, but these other four are expendable. I did turn into a Natalia fan upon her exit, because I too would immediately demand answers and leave in fire and brimstone if I was blindsided, but in the game she wasn’t too much of a joy to watch. Being a hot female engineer, I think she’ll do fine in life, so I don’t feel too bad, but she was slightly screwed by bad luck here. Of course it was her fault that Alec turned on her because she could have been less annoying, but as a smart person, it’s hard for someone like Natalia to plan around stupid people actively behaving against their own interests. As a player, the most sound logic is usually to plan around what everyone else will presumably do based on what is best for their game. Playing with an idiot like Alec makes this impossible, and is where reading people and good perception becomes important in Survivor, because dumb people are wildcards, you have to predict what they will do based on who they are, not what makes the most sense for them. This is incredibly difficult and frustrating, so it’s hard to put all the blame on Natalia here. Anyway, the other people on this tribe are duds. I don’t care about Elizabeth. I don’t believe having kids and a cowboy hat is the same as having a personality. When I try to imagine Kara’s face it’s probably not even her face, it’s some other random expendable blonde from, like, Redemption Island, but I wouldn’t know because they might as well be the same person, and honestly they might be and no one would notice*. Alec is not long for this game or this world. I thank him for this week’s good TV moment, but we’ll see him bounced out shortly after the merge and enter the void of Random Survivor Dudes floating around in my head that I’ll think about once every 8 months and go “huh,” and then promptly file him away again until I see the next tacky Hawaiian shirt on a passably attractive guy.

Lastly, we have the Carl tribe, which it turns out is a great tribe. Carl finds an advantage that I find very unlikely to be played correctly, but I think his circumstances are looking pretty good right now to at least not waste it before the merge. As part of Alec’s incredible blunder, he will join the orange tribe in Natalia’s place, making it a 3-2 David advantage, including the duo of Carl and Davie, who have a great rapport, and both carry advantages, unbeknownst to anyone. It’s an exciting duo, and the best part of Alec’s mistake is that the people most likely to take the fall for it are himself and Kara, neither of whom anyone will be too distraught over losing, especially because they’re the troublemakers that broke their contracts, so any expectations of their ultimate success in the game should have been tapered from the beginning, at least if you read TMZ. Currently looking forward to that downfall, but as this season charges on without a disappointing episode yet, I’m sure there will be a few curveballs along the way. Catch you next week, Rockstars, I’ll be practicing my air guitar until then.

*Editor’s Note: I predict Lita will come around on Kara whom I think is pretty savvy and refreshingly grounded. I just wanted to put that on the record so I look extra smart when it happens. Also, I almost fired Lita for calling my beloved Gabby & Christian “cringeworthy”, just so you all know the stakes here.  – Kelly