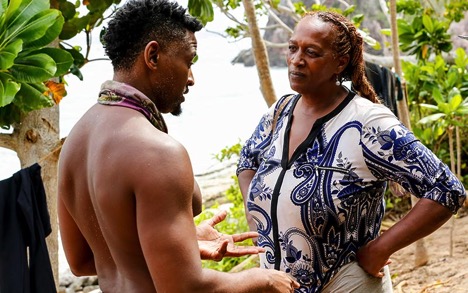 Welcome to the latest season of Survivor: An Amazing Cast vs. An Incredibly Forced Theme and Terrible Production Choices! I must admit, I’m probably falling into a trap here of being incredibly stoked on a season so early on, since I’ve been burned before… basically every time I’ve started to like a Survivor season in the last couple of years. Nevertheless, we press on, with a dynamic group of weirdos and another exciting tribal ahead of us.

The episode kicks off with what I can only describe as a mansplained retelling of last week’s events, with the bodiless Probst explaining how even though we saw with our eyeballs Lyrsa and Elizabeth orchestrate Jessica’s blindside, actually it was in fact the dudes, Nick and Christian, because they have an alliance name and we are supposed to root for them and therefore they are actually the masterminds behind everything. The only power they were credited as having during the actual episode last week was being the “swing votes,” which is not the same thing as coming up with an executing the idea themselves. Needless to say, this does not give me much hope for the Punk Rocker Lesbian/Cowgirl alliance, which granted is a little clunkier but still far less stupid sounding than the “Mason-Dixon” alliance.

Relatedly, Something to watch is that even though ElizaLyrsa actually flipped the vote, then Nick and Christian were instrumental in implementing the vote, it’s Gabby that takes most of the fall with Bi, who feels the most betrayed by her. I don’t necessarily blame her, Gabby has a trustworthy face and seems extremely lovable, but I do feel bad for Gabby here who seems a little lost overall. A war over Christian’s loyalty between her and Nick is brewing, which must be fun for Christian because this is certainly the only time two people have ever fought over him. Fortunately for her, I doubt her unknown enemy in Bi will have much time to strike, since her knee injury getting any screen time gives me the sense that something (hopefully a little less Pat-like and gruesome) will go very wrong for Bi in the near future.

Speaking of things going wrong, it’s never a good sign when a contestant gets to tell their whole sob story in the third episode of the show, so I have a feeling right from the jump on the Goliath Tribe that Jeremy is in trouble. It’s a bummer, because even on an incredibly dynamic tribe (sure, Dan is a dud and literally who is Alec? But lots of bright spots outside of that), Jeremy stands out. Plus, it’s so rare to see an openly gay black man on the show that to see him go out in the exact same spot as the Purple Pants Badass himself, Brice, back in Cagayan, makes me sad. Yet Jeremy is shooting himself in the foot here, calling entire tribe meetings and telling an already energized and volatile Natalie to her face that she’s going instead of attempting to soothe her or even work with her to flip the vote against his real target, Dan, which would have been a much more satisfying end to the episode.

Since the Goliath Tribe finally faces Tribal and therefore has some real screentime all to themselves in this episode, it’s time to talk about why I love Natalie so much. Not only are her quips hilarious, both intentionally and by accident, but also I have absolutely no idea how she got cast, where she came from, or why she is here, and I love that. Natalie is not the type of person who gets cast on Survivor. Demographically, she is a unicorn. Usually there is a spot for a black woman and a spot for an older lady, and here Natalie is slotted into both simultaneously, a huge rarity in Survivor. It’s possible she was cast to cause conflict, like so many black women are in reality TV, but she has a different energy than that type of character. Natalie doesn’t yell, and she doesn’t fight. She dismisses, she frustrates, she disagrees, but she does not fight. She has an energy that precludes me from thinking of her as incompetent, despite clearly knowing little about the strategy or survival element of the game. She just seems to know what she’s doing, even when she clearly doesn’t. People often talk about the element of a wild card benefitting certain seasons of Survivor – Abi Maria, for example, provides a strategic wrinkle in managing a player who often acts against her own interests. Natalie is sort of like that, in that she’s like if someone’s mom just walked into Fiji off the street, but once she realized where she was decided she was going to play her heart out, all while doing things her way. She is my favorite contestant in years.

For these reasons, I am frustrated but resolute when it comes time for the vote. So fascinating and infuriating to see it come down to the two people of color for the first vote. Again. It’s disappointing that Natalie and Jeremy can’t come together to rally some of the oddballs to work against the hot kids, but at this point it’s clear that it’s one of the two. Jeremy’s disrespect only galvanizes Natalie, who is benefitted by Angelina identifying Jeremy as a much larger threat. Angelina’s determination to target Jeremy over Natalie really frustrates Natalia, who can never complain about being dehydrated on this whole season because she has been drinking so much haterade. Natalia loathes Natalie, which makes it all the more surprising and honestly a little impressive that she ends up going with the unanimous vote against Jeremy, despite not really having a choice. Her extremely weak sauce excuse for trying to turn the vote on Natalie is that they need challenge strength, as if she expects everyone to be believe that she’s completely new here and doesn’t know a swap is coming.

So alas, we lose Jeremy, but in the wake of him blaming his elimination on an alleged extramarital showmance between Angelina and John, I can’t exactly feel too bad for him. It’s a classless way to exit, in part because it refuses to take responsibility for any mistakes he may have made in the game. However, at least in Jeremy’s ouster we got one of the greatest voting confessionals in memory from Queen Natalie. It’s the newest take on the Hairspray-quote-turned-drag-queen-catchphrase, “Love your hair, hope you win!” and I will henceforth be using it every time I shade someone.

We’ll see you next week – oh, and your skin is glowing, darling.