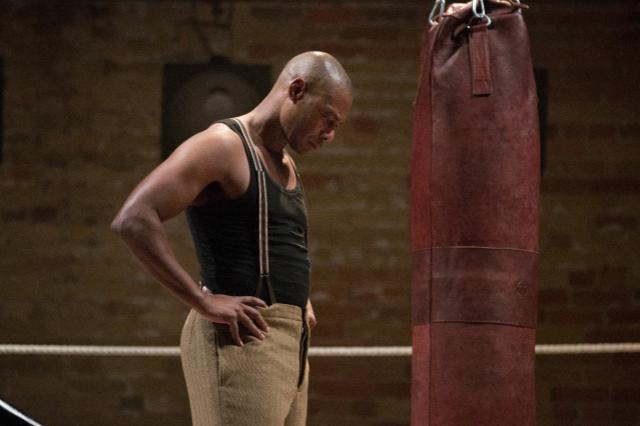 The audience is silent and still. A dim light contours a man in boxing gloves and shorts, his slightly bent head and shoulders gleaming with sweat. There is a ripple of anticipation as he takes a deep breath, lifting gloved fists — in that moment, the figure is both the bow drawn taut and the arrow about to fly.

In an era where race is a hard, nearly visible line, Jay Jackson (Dion Johnstone) does not only have to fight with his fists, but with the very colour of his skin. With a determined eye on becoming a heavyweight boxing champion, he reaches for a prize that no black man has reached before, and with that bears the weight of over 200 years of segregation and racism. Though he trains with his mentor Wynton (Alexander Thomas) and a young-and-upcoming boxer Fish (Christef Desir), he is taught that every man fights alone in the ring.

The Royale, a Soulpepper production by playwright Marco Ramirez, is a poignant and tension-filled exploration of a boxing match loosely based on the actual fighting career of Jack Johnson.  Over the course of six rounds, we catch a glimpse into the thoughts, fears, and lessons given to him by family and peers on his journey toward the heavyweight champion title

Ken MacKenzie‘s set design is simple and as rough as the era the play takes place in, tailored to look like a boxing ring of old. With minimal music, the play is driven seamlessly by its characters – often, we hear Wynton and Nina’s voice carrying through Jay’s mind, almost an equal opponent his fight as the men before him. Good pacing and smart dialogue makes The Royale shine. Though the characters fight with no actual physical exchanges, each actor on opposite sides of the stage, we get an opportunity to see the internal battles as well as outer, physical ones. When Jay swings, Fish flinches as if struck, stumbling back. When Fish strikes, we can see Jay dodge effortlessly. It makes for a beautiful and bloodless interpretation of each round and allows for running commentary of each character’s thoughts and struggles.

Jay Jackson is confidently at home in the ring, and Johnstone comfortably embodies his swaggering confidence. He adopts Fish as a sparring partner after getting a sense for the young man’s blossoming boxing talent, and their playful roughhousing breaks a few moments of tension with subtle artfulness. One gets the sense that the Jackson doesn’t think much of his effect on the Americans watching his rise to the top. The same selfish, single-mindedness that helps him achieve his dreams is also responsible for his almost complete ignorance to the racial tension that builds around him, and it is an ignorance that costs not only him, but his family and friends. When his sister Nina comes to visit him, played by the well-poised Sabryn Rock, her fearful words echo in his mind later as he squares off against the previous heavyweight champion and adds to the tension of what exactly he stands to lose to the wrath of the public by daring to fight in a white man’s world.

Jay Jackson’s white promoter Max (Diego Matamoros) is filled with these same prejudices, the script reflecting these deeply ingrained and poorly attributed ideas that seem to slip out of him without him noticing. At one point he compares Jackson to an animal in what is surely meant to be complimentary, but only starkly expresses his own internal racist ideas of even the man who indirectly puts food on his table. We get a sharp taste of what was considered acceptable lines of query toward a black man when Matamoros steps lightly into the shoes of various news reporters, firing questions that would elicit angry gasps and murmurs from today’s crowd.

The Royale is a splendid play, and a must-see even for those who aren’t boxing fans. With a strong script and a startling denouement, viewers will be drawn into a story that perfectly encapsulates bittersweet victory.