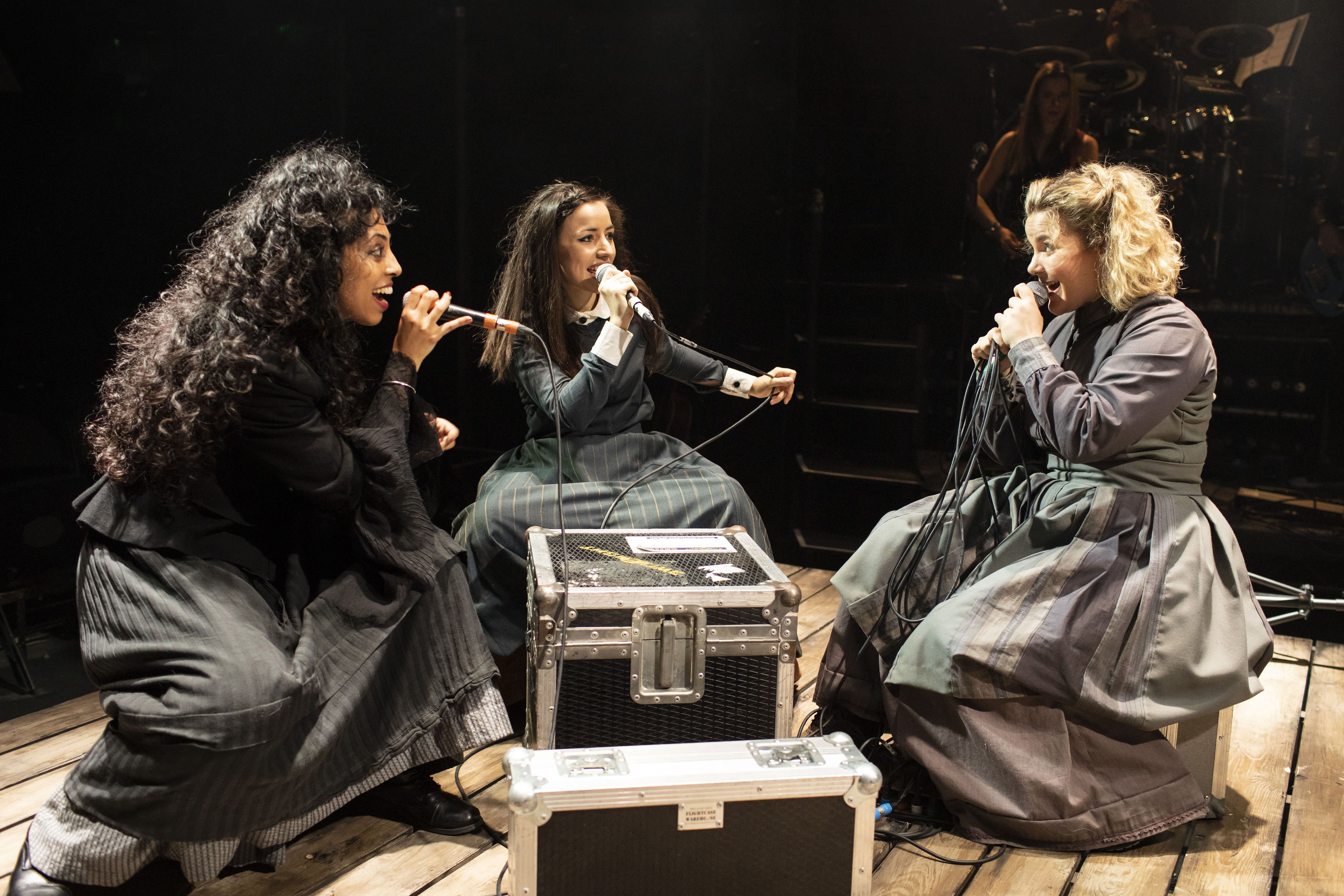 A bold new rock musical that brings a contemporary feel to the story of the Bronte sisters, this is a fun and smart piece of work that doesn’t shy away from experimental ideas, and while still a little rough around the edges, is an admirably successful piece of work.

There are many parts of this production that we’ve seen before. Popular genres mixing with musical theatre is becoming ever more common, and the modern twist on a period piece is similar to works like Spring Awakening or more recently Lizzie. At the same time, the show seems fresh and innovative in its writing, but also in the staging of this specific production.

Carl Miller’s book is quick witted and enticing. The background of the Bronte sisters is intriguing in itself and Miller mixes facts and speculation surrounding their relatively private lives appropriately. An extensive understanding of the source material is not required as the numerous nods to the literature are enjoyable to those with only basic awareness of Jane Eyre or Wuthering Heights (like me!). At the centre of the book is the relationship between these siblings who share a passion for writing but more than anything, a love for each other. The dialogue is written with heart and humour and makes these 19th Century lives relatable.

Christopher Ash’s score is a little less consistent, but the musical successes definitely outweigh the missteps. Some of the heavier punky songs can get a little repetitive and jarring, which was a worry as the show starts very much in this vein. However, it mellows out quite quickly and seems to settle on a little more of a softer rock / indie vibe. That being said, Ash experiments with a number of genres, including rap, pop, and even beatboxing (plus dog sounds). Overall, it could benefit from some tightening up. There are some absolute belters in the score, but with 27 songs and running well beyond 2 and half hours long, cutting the length of both the score and book would make the show slicker.

Adam Lenson puts emotion at the forefront of his direction, producing a passionate piece of theatre. With the band placed front and centre and setting most of the action on a square stage, there is a raw feel to the production. Libby Todd contrasts period costumes with a modern set using equipment that you’d find at a rock concert (batteries, guitar amps etc.) as the only props. Wired handheld microphones are used for all musical numbers and narration while dialogue is performed more traditionally. This idea works well making the numbers all the more powerful.

Lenson’s job was undoubtedly made easier by the cast he had to work with. Natasha Barnes in particular is breathtakingly good as Charlotte Bronte. Tackling a challenging score she performs song after song effortlessly with such a beautiful tone and perfect intonation. “(Extra)Ordinary Women” was particularly memorable, and could have easily been mistaken for a Blondie track. She also has an understanding of humour both in her mannerisms and sharp one-liners. Each character has a unique personality that really shines through in their performances. Barnes plays Charlotte brash and confident, yet caring and protective. Molly Lynch is naïve, sensitive and optimistic as Anne, Siobhan Athwal plays Emily as paranoid and reclusive, and Matthew Jacobs Morgan is foolishly self-confident as Branwell. The actors compliment each other well and the family dynamic is very believable. “In Five Years’ Time” where the characters find themselves back together, is particularly potent and impressive.

Imaginative, original and exciting British musicals are a bit of a rarity and Wasted definitely fits into this group.  It is too long and the book and score both need tidying up, but there is the workings of a great piece of theatre here. As for a cast and crew to show this new musical off with, you’d struggle to find any better!