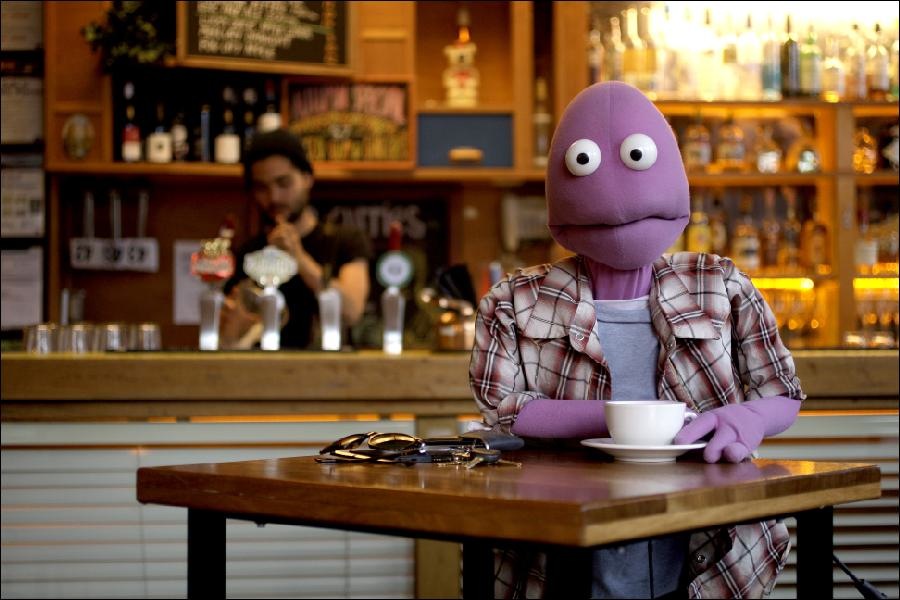 Randy Writes A Novel, currently playing at the Clurman Theatre at Theatre Row, is not what one would conventionally call “theatre,” per se. The show is set in a theatre, but it is really a semi-scripted stand-up comedy act built around personal storytelling, riffing on societal commentary, and interspersed with existential philosophy and reflection. And it’s all done exclusively through a purple puppet, Randy; the felt-faced avatar for the one-man writer and performer of the show.

It is undeniably unconventional; a unique cross-section both of topics and means of exploring them. This unusual mélange serves as a double-edged sword; the show is surprising and unexpected in ways alternately complementary and disorienting. Randy’s earnestness and vulnerability are made more potent by first fertilizing the mental soil of the audience with the natural amicability engendered by laughter. At other times, the transition from a “What’s the deal with _____?!”-riff abruptly into a solemn self-reflective soliloquy creates a tonal dissonance that feels jarring and poorly integrated.

It’s a high-risk/high-reward performance-strategy that ultimately pays off more than it turns off, and it’s a show that wins bonus points for aiming to use comedy and performance for something more intellectually stimulating and artistically self-aware than mere entertainment.

Randy Writes A Novel is unfortunately and unavoidably done a disservice by its distinctly theatrical setting. At the top of the show, Randy acknowledges that the behavioral expectations and engagement of a theatre-going audience are implicitly different from those of an audience at a comedy show. This acknowledgment is an admirable attempt to course-correct the audience’s mindset, but it’s a difficult battle to win. While it’s easy to imagine the show sparkling in the context of a comedy club, it has difficulty flourishing in the same way when it has to consistently fight upstream against an institutionally more reserved theatrical tradition.

Despite the innate difficulties of the venue, and the occasionally disorienting shifts in tone, Randy Writes a Novel is thought-provoking, clever, original, and undeniably funny. It is a show that is personal and intentional, and worth the trip and ticket price.