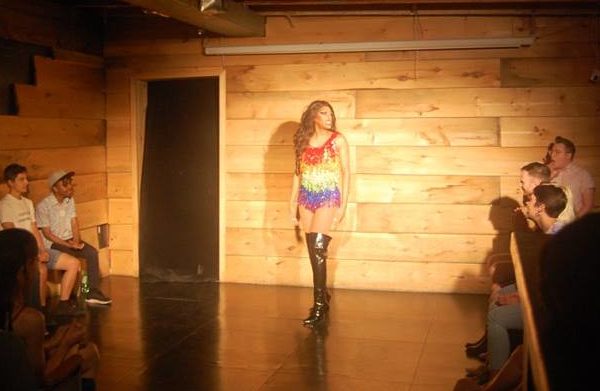 Bad Dog Comedy Theatre is getting in on Pride month with an Official Pride Toronto Community event this weekend, a two-day mini-festival of shows highlighting LGBTQ performers. Three shows on Friday will be followed up by four shows on Saturday and, as is often the case at Bad Dog, you can add shows to your night for just a $5 upgrade after the initial ticket price of $10.

I checked out the first two offerings on opening night, partly to support the festival and partly because both hour-long shows were set to feature my favourite improviser Anders Yates. Up first was Kinsey Fail, an all-LGBTQ improv group founded two years ago by Yates and Proud + Funny co-producer Tom Hearn. The troupe is a little imbalanced (Yates and Hearn definitely carried more than their share of the weight, a few performers barely stood up at all) but the performance was uncannily consistent in its quality, excellently running the gambit from dirty absurdity to emotional honesty as the improvisers created scenes based on stories told by guest artist Priyanka Queen. Opening and closing the show with epic drag lip syncs, the outrageously gorgeous Queen delivered the show-shaping monologues out of character, telling touching personal stories about growing up as a gay man in a conservative household and dealing with gross fans who fetishize the queen but don’t respect the man. This last one and its heartbreaking ‘you’re prettier as a girl’ climax inspired the scene of the night as Kyah Green flipped the story on its head to play a character who was trying out a chest binder for the first time and, with the lovely support of an in-scene girlfriend played by Caitlin English, was joyfully able to declare ‘I’m prettier as a boy’. Every time I see Green perform, I fall more madly in love with their instincts, sincerity, and consistent ability to surprise me. This brief but beautiful foray into “and now I’m crying at an improv show” territory was yet another moment that solidified Green’s place in my view of Bad Dog’s top tier.

Kinsey Fail was followed by Charisma, Uniqueness, Nerve & Stand Up, which is a RuPaul reference I had to google because I’m not even a little bit hip. The showcase of local LGBTQ comedians was hosted by Yates who (following through on his promise to do more stand up) transitioned between acts with mini-sets of his own, featuring bits as innocent as jokes about his height and as explicit as a run about adding an analingus expert to the Queer Eye makeover team. The featured acts themselves were just as varied in both style and effect. They weren’t all my speed but I fell hard for Anasimone George’s energetic confessional style and Taylor Rivers whose set was like hilarious topic whiplash with transitions so smooth you’d think he never changed topics at all.

Moment to moment, the LGBTQ comedians of Proud + Funny provided the most consistent night of comedy I’ve seen at Bad Dog. They should be featured more, whether it’s Pride Month or not.