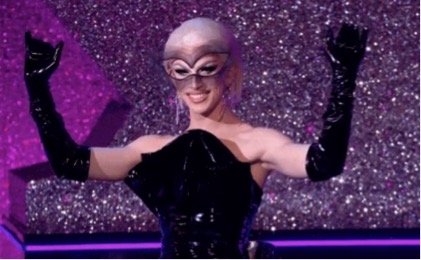 RuPaul’s Drag Race S10 Finale: This is the Dawning of the Age of Aquaria

If you told me week one of this season that I would let out an audible whoop and applaud at my local gay bar when none other but the auteur of such air-headed quotes as “I don’t define drag, drag is defined by me” was crowned the winner, I would have known far in advance that this was truly the darkest timeline in terms of the top 3. It’s not that I was expecting Asia to win. Her (completely warranted) sparring with Ru at the reunion did not indicate that she had just snatched the crown, more that she felt at liberty to say what was on her mind now that she was not representing the season as its winner. Still, despite the disappointment of our rightful queen Asia being predictably robbed of the crown, there was no argument against Aquaria, either in this season or the finale. Never in the bottom, a secret comedy queen, and absolutely unclockable in both of her lip syncs, Aquaria’s talent and nerve were undeniable this season. The charisma had its moments, and I would argue that she sometimes lacked in the uniqueness department (she always looked great, but at her least original resembled a Violet Chachki 2.0), but given the competition in the top 3, no one can rightfully complain about this outcome.

A theme of the night was honoring the show’s origins, after a decade of changing the landscape of drag forever. It’s often bemoaned how the queens from earlier seasons never got to blow up like the ones that came in the age of Instagram and Twitter. No one was hashtagging about Nina Flowers when the viewers of RuPaul’s Drag Race were predominantly queer kids like me, watching the TV on low volume and changing it when my parents walked by, not knowing how I would explain the show or why I devoured it, like anything else I could find on the Logo channel that made me feel seen, to my parents who just saw men in dresses and makeup. As Drag Race has shaken much of the stigma, partially due to being moved to VH1, a channel not explicitly geared toward queer interests, the exposure that the queens get with each successive season skyrockets, and it becomes even more of a shame that the early trailblazers are left behind. For all of the excessive pageantry and self-congratulations of the show, it is nice that they give opportunities like this, and even the absurd amount of All Star seasons, in order to give that same chance at fame to the season 1 queens as the season 10 queens had from the jump.

As for the lip sync battles themselves, I maintain that this format change is incredibly stupid. The first time we saw this structure was in season 9, when it swindled Shea Coulee out of her hard-earned crown. Even as a Sasha Velour fan, it’s hard to argue that if it had been any other finale, Shea would have won handily. To add insult to injury of keeping this ridiculous format, we have to watch Kameron knock out Asia first as a result of Asia’s live accoutrements refusing to cooperate with her (those butterflies were not dead, dammit! They were just sleepy!). On top of that, Aquaria and Eureka face off in a one-sided lip sync that clearly belonged to Aquaria, but Ru is so desperate to give Eureka as many undeserved chances as possible that she uses the second double chantay of the season in order to keep Eureka in it and allow the final lip sync to be all three of the remaining queens. Thankfully, Aquaria came prepared, pyrotechnics and confetti guns-a-blazing, for the perfect takedown of Eureka and Kameron, providing a satisfying, if predictable, ending to a bit of a lukewarm season. At the end of the day, I’m comforted by the palate cleanser after the absolute robbery at the end of All Stars 3, and now feel like we can move into the next season refreshed.

Oh, and there’s more good news! Monet X Change has become only the second black queen to win Miss Congeniality. Traditionally, Miss Congeniality is fan-voted, though the vote was allegedly hacked this year. I did peek some of the leaked “results” a little while ago, and while the Vixen being so far in the lead was clearly fishy and I do buy that the tally was artificially skewed, I have a sneaking suspicion that if the rigging was in favor of literally any other queen, Ru would have simply accepted the vote and not said anything of it. Nevertheless, Monet won the title by virtue of the other queens voting for her, and while my votes were going the way of Monique Heart, there’s no complaining about the queen of sponges and british accent history walking away with the prestigious award.

To put a bow on this season, I would like to remind everyone that the five black queens of season 10 were groundbreaking. They were silenced and pushed down by Ru and the fan base. They were adored by those who needed them. They became idols, role models, and vocal representations of what needs to change within the drag community. They held their heads high. They screamed, they fought, they cried, they loved, they laughed, they served looks, they shone, they helped, and they triumphed. It would be a mistake to move forward without putting the same care into casting such a nuanced and diverse array of black queens, in their art, their perspectives, and their personalities. In all of the disappointment one may feel in season 10 as a whole, they should not be forgotten. Black girl magic is real, and these queens have opened up the floodgates for themselves and other black superstars of the past to talk about how real the racism within the drag community is, and I hope we continue to talk about it, to interrogate why black queens have been underserved and over-hated on the show, and to do better as a community of queer people and drag lovers at large, because there is no other way forward. As a wise woman once said: Facts are facts, America.