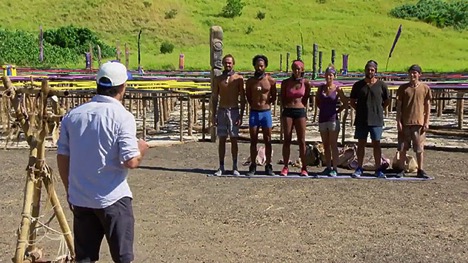 Welcome to the sweet release that is the final resting place of Survivor: Ghost Island. It’s no secret that I was disappointed in this season throughout its run, but the only person ruder than me about these players is Jeff Probst as making introductions to each player in the same manner that actors come out for the curtain call at the end of a musical: Smallest role to largest. He takes us through Sebastian, Angela, Donathan, and Laurel, as if it matters in the end, then finally introduces the titans of Wendell and Dom. I did go into this finale completely resigned to the fact that Domenick was going to win, which potentially is to the show’s credit in that they created some unpredictability, but for my money is more to its detriment for spending so much time on this dude who didn’t even wind up winning. I truly cannot remember a season where from the merge on it was only a contest between two men, but boy did that make for a long slog. My friend and I sat through this 11-hour finale in near silence, knowing that there was nothing to discuss, that until the final vote came down, inevitably to Wendell and Dom, nothing that anyone did would truly matter. I give the very end some credit for creating one legitimately gasp-worthy moment – I didn’t think we would ever see the infamous tie – and it paid off in my preferred candidate of the two pulling out the win. Say what you will about all of the various curses and magic afoot in this season, the fact that Jeff Probst just happened to explain the rules of a tie at the last reunion, before this season filmed, is the most insane Survivor magic in history.

Remember when women used to win immunity? Neither do I, because Angela and Laurel, along with our good friend Seabass, suck at the puzzle at the end of this extremely cool looking maze, while Donathan sucks at the maze portion itself, which Probst is eager to point out and be unnecessarily sassy about. Wendell pulls out the win, and we are subjected to Sebastian threatening to use his double vote to get out Dom, as if that’s ever going to happen. He rallies Donathan and Angela to make the move, but Angela immediately runs to Dom because she decided that she would like to be remembered for something besides eating slugs, and that thing is single-handedly ruining any hope at intrigue in this season. Meanwhile, Wendell still wants to vote out Sebastian, because he’s such a… gigantic threat? Because he thinks he can get his jury vote? It doesn’t matter, nothing matters.

Laurel is reasonably upset that Wendell chose Angela and Sebastian to eat steak and potatoes with him for his reward. She correctly points out that while Dom and Wendell are protected by their idols, she is the one who needs immunity, and Wendell is providing them with fuel to beat her in the necessary immunity challenge. She also accurately identifies that it seems odd that Dom and Wendell are defending this decision by saying that Angela “needed it the most” and it was just a decision out of the kindness of his heart, an emotional decision. Because Domenick is on a mission to get bingo on my Condescending Dude Scorecard, he calls Laurel emotional for reacting this way, because a woman saying anything that he disagrees with must means that her perspective is emotional and therefore invalid.

At tribal, Dom and Wendell are extremely rude to Donathan which just feels unnecessary, especially because they aren’t even voting for him and are gonna have to hang out with him when they get back from camp. Donathan is, expectedly, the absolute best, and is taking absolutely no crap from these boys. It has been incredibly rare, and possibly has not happened since season 32, that I have seen a player and thought, “I really need this person to play again,” but I would love nothing more than for Donathan to make a triumphant return as the fully-formed oddball badass that he is. I love the way that he embodies unconventional strength. He deserved that Sia money, I don’t care how ridiculous it was. After putting Donathan on blast, they vote for Sebastian, who has somehow been convinced not to play his extra vote, and is bounced out here to the shock and horror of zero people. Good for him for finding a girlfriend on the island. I hope I never have to hear from either of them again.

Because the twists just keep on coming, Wendell wins the next immunity challenge. We all know where this is going, though the vote is set up as a choice between Donathan, who is and has been working against Domdell, and Laurel, who is ostensibly their biggest threat in the immunity challenge, not that it matters because they will both wind up protecting her anyway in some way or another, knowing, as we all do and Laurel should have long ago, that she never really had a crack at this thing. After a big, grandstanding speech, Wendell plays Erik Reichenbach’s idol for her, and though it wouldn’t matter in terms of the vote, since Donathan was going home anyway, this may have been a million-dollar play for Wendell, since it would be Laurel who would hold the glory and the money in her hands and decide on whom to bestow it to.

Dom wins the classic dexterity challenge at the final immunity, and for some reason they all go to Ghost Island for their last night. In a shocking twist, Domenick opens a scroll that Jeff gave him to reveal that he has to make a game altering decision: He must choose a decorative urn in which they will put the votes. Please hold your shock and awe at this game-changing twist. The urns are from three seasons in which the final immunity winner chose the wrong person to take to the end, with two inarguable examples in Australia and Cagayan, and one extremely questionable example in Game Changers, which, for my money, shouldn’t count because it’s possible Culpepper would have lost no matter who he brought. There are a lot of examples like Culpepper where it’s hard to say definitively, at least much harder than the cut and dry examples of Australia and Cagayan, but they will take any excuse to shoehorn the most cursed season of Game Changers into this show to pretend like it didn’t unequivocally suck. I’m here to remind you that it did. Dom unsurprisingly chooses the most ostentatious urn in Cagayan, and is forced to deliver an oral report on it at tribal council for some reason. We are once again teased by the inevitably quashed notion of intrigue when Dom threatens to give his immunity to Angela, protect Laurel, and throw himself into the fire-making challenge to make sure Wendell doesn’t get to the end. This would obviously be an insane thing to do, and it’s results-oriented to think this would have been the right move, but it’s worth pointing out that knowing what we know now, this would have been a better play. He risks going out at four looking like a complete idiot, with his flint ending up on a future Ghost Island and being introduced at next year’s finale alongside James and Erik, but it would be an incredible moment and, as we know now, his only shot at winning, since winning the fire-making would guarantee him the million dollars against Laurel and Angela. He doesn’t do this, however, and we are subjected to watching Angela vs. Wendell in yet another lop-sided firemaking challenge that concludes with the most predictable result.

So it’s Wendell vs. Dom and Laurel is also there in the final 3. Congrats on this season for not being a complete Pagonging, I suppose. My controversial Survivor take is that while I hate the final 4 firemaking twist, I think that Probst changing the format of the jury questioning is much worse. I really miss each juror getting their final moment. It made these often pointless-seeming final tribal councils memorable, now it’s just a jumble of Sebastian being incoherently angry and Michael saying boring stuff that people on the internet pretend is smart because he is a child and people are impressed by that. Ultimately, Laurel makes her choice between the man who protected her at final 5 and the man who guaranteed her final 3, and she makes the right choice, for my money. I have to say, as much as this season was a let-down time and time again, I find this ending about as satisfying as it possibly good be. It felt good to watch a black woman hand the well-earned victory to a black man. We still have a long way to go; this is the third time we’ve seen two black people in the final three together, and all three of those times, the black man has won, and the black woman has received zero votes. Still, there is something heartening and classic about loyalty and solidarity counting for something in this game, as well as the jury respecting both power players’ games completely equally.

On a final note, while I am excited to put this season behind us, I want to make clear that I don’t blame the cast for this catastrophe. The twists, the advantages, and the incredibly, impossibly unbalanced editing are to blame. I think that this was overall a very fun group, and one who did their best to deliver on character moments, truncated by the fact that they were not given the proper space to do so. The range of diverse and potentially memorable characters are precisely why the editing and production decisions were so frustrating. I felt that this cast had so much more to give than they were permitted to. Hopefully next season will grant us a female winner, because lord knows editing would never give this kind of screen time to a female winner this side of Kim Spradlin, so a woman winning always results in a more even distribution of time with each of our characters. Until then, thanks for sticking with me through this one, and keep hope alive that we can reverse the curse of these lackluster seasons in “Survivor: David vs. Goliath.” Oy vey.